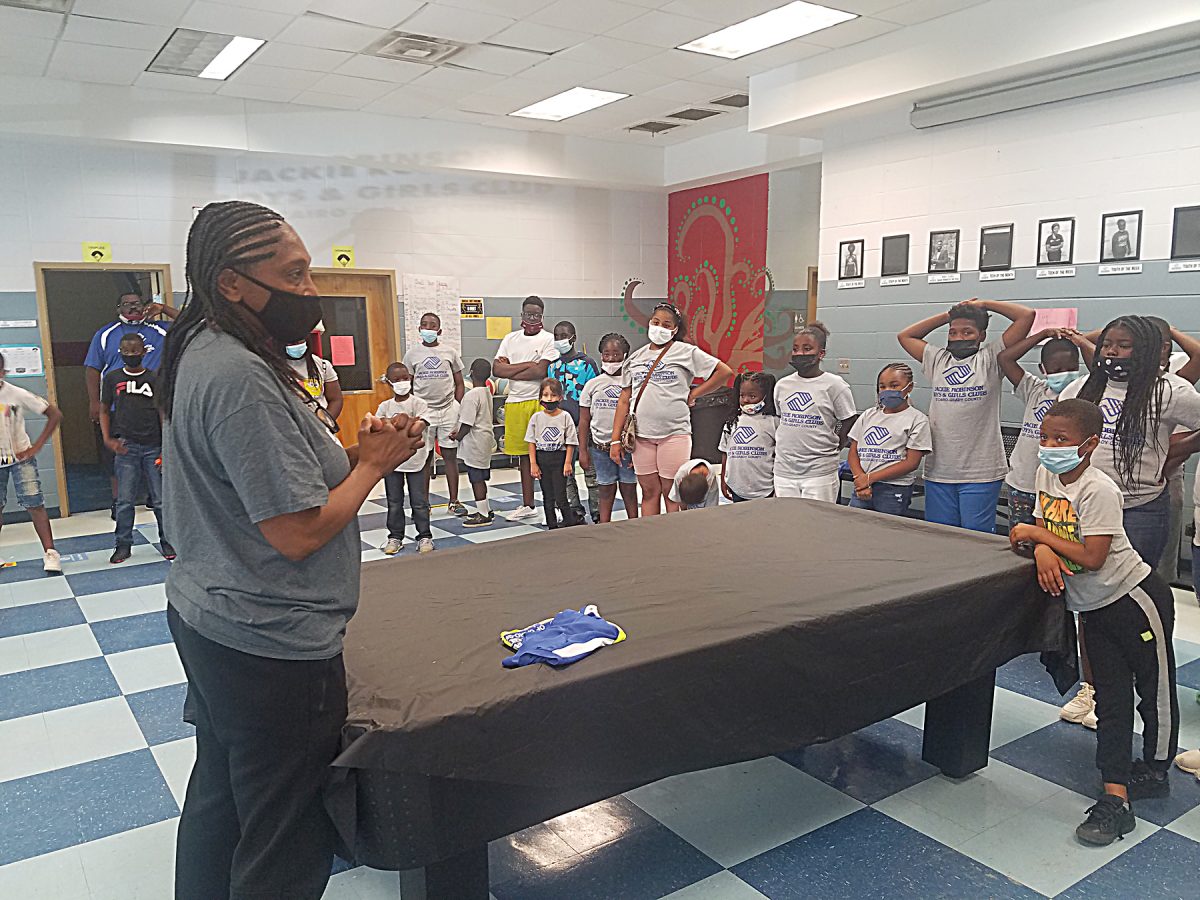 HOMETOWN HERO TERESA EDWARDS told the children about her journey from Cairo to the Olympics.

As part of the week, June 21-25, Boys & Girls Clubs across America and on U.S. military installations worldwide hosted a weeklong celebration featuring the many fun ways clubs are doing whatever it takes to help their youth stay on track as the nation begins to recover from the COVID-19 crisis.
Stephen Francis, executive director of the club in Cairo, says many of the week’s celebrations focused on the club’s ability to provide a safe place, academic support, workforce readiness, and health and wellness programs.
Visitors who helped reinforce the message here included basketball players, cheerleaders and even hometown hero Teresa Edwards.
Edwards, a five-time Olympian with four gold medals to her name, capped off the week’s activities with her visit on Friday. As one of the most decorated team sport athletes in Olympic history, she told the club members about beginning her Olympic journey at the age of 20 and winning her first gold medal at the 1984 Summer Games in Los Angeles.
Edwards soon added gold medals at the 1987 Pan-American Games, 1988 Olympic Games, and 1990 FIBA World Championships.
She was a dominant playmaker at Cairo High School before going to the University of Georgia, where she lead the Lady Bulldogs to six SEC championships overall and two NCAA Final Fours.
After graduating from college, Edwards polished her game around the globe with stops in places like Italy, France, Spain, and Japan.
But every four years, she returned home to represent her country in the Olympics.
In 1996, the Cairo native won gold medal number three at the Atlanta Games.
Soon after, she played professionally for the Atlanta Glory in the upstart American Basketball League averaging better than 20 points and six assists per game.
In 2000, Edwards won her final gold medal in international competition as the first American to appear in five Olympic Games.
Basketball also kicked off the celebration of National Boys & Girls Club Week at the Jackie Robinson Club with a visit from Cairo High School’s boys basketball head coach J.J. Cooper and his team. They talked to the children about being successful on and off the court. Weather prevented the team from participating outside with the children.
On Tuesday, the club members participated in community service projects around town. They visited four different parks, Holder, Davis, Azalea and Southern Terrace, to pick up trash. Weather, again, though, prevented the group from completing their service plans.
Wednesday’s planned kickball game had to be cancelled due to weather.
But, on Thursday, Cairo High School cheerleaders Lynlee Poppell, Taylor MacNeil, Amari Brown, Macie Freeman, Sara Pearce and Braeden Puckett volunteered their time at the club to teach cheers to the children. They also performed a variety of activities with the club members.
Posted in News