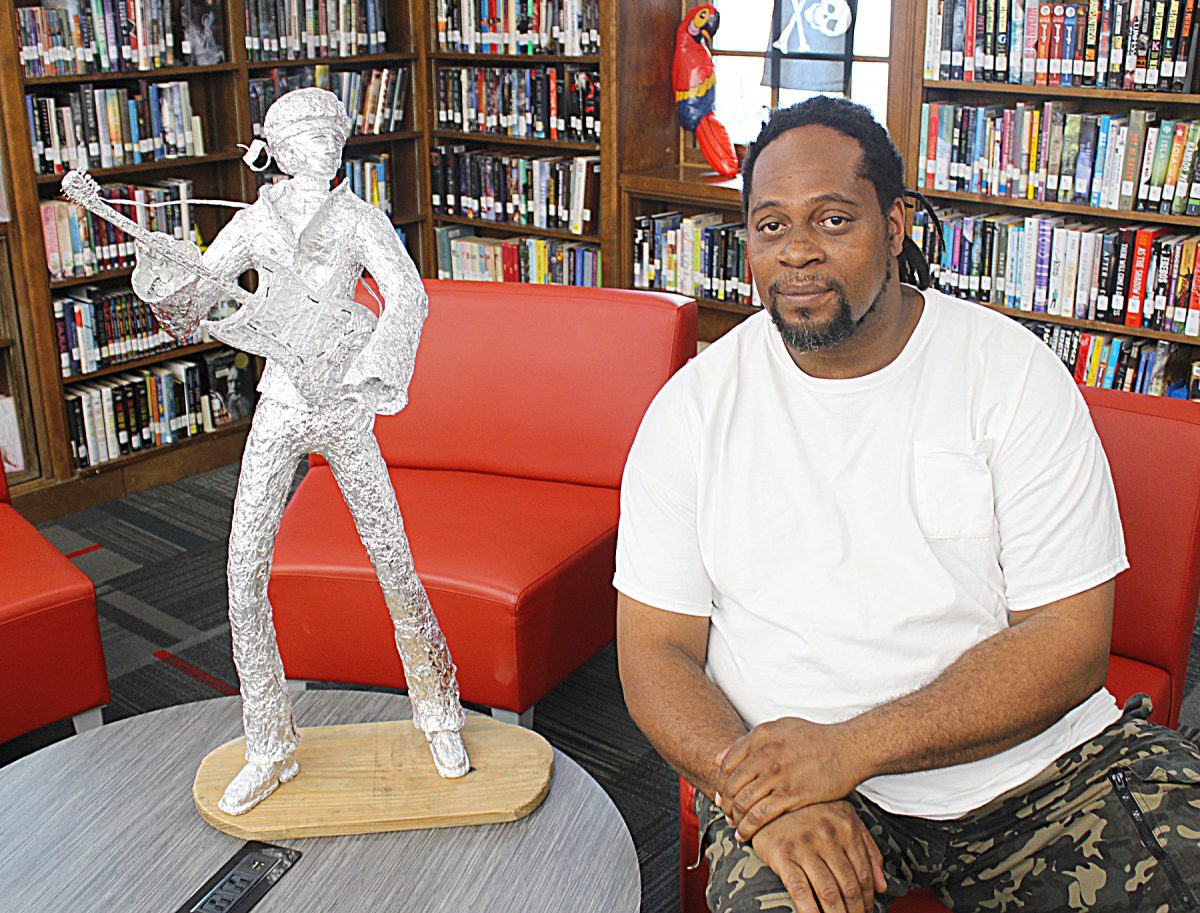 QUINLIN JAMES poses with his aluminum foil sculpture of electric guitarist Jimi Hendrix, now on display in the public library.

A Cairo native featured by The Messenger two decades ago continues to share his talent with the community today.

In 2001, 25-year-old Quinlin James had clay and aluminum foil figurines of characters from his favorite anime TV show, “Dragon Ball Z,” on display in Roddenbery Memorial Library. James, now 46, donated a foil sculpture of acclaimed musician Jimi Hendrix to the library’s teen room in February 2020.
“Everyone that passes by to see it is just in awe at the detail of it,” says circulation supervisor Ernestine Daniels, who had just begun working at the library when R.M.L. first showcased James’ art pieces.
In the November 2001 interview with The Messenger, James mentioned his plans to start a sculpture honoring first responders to the 9/11 terrorist attacks, which he did later complete and sell. In all, the artist estimates that he has created around 500 pieces in the past 20 years.
It is unknown when the sculptor’s original figurines left the library. However, James himself moved from Cairo to Texas in 2009 to search for work. When he returned 10 years later, the son of Bernice and Zemer James says that the library staff and other community members still remembered him for his art. The library’s assistant director, Jessica Wilson, invited the artist to display more of his current work.
James previously shared that he began sculpting from mud when he was five years old. The 1995 Cairo High School graduate has never received formal art training, perfecting his craft through trial and error instead.
James took a break from crafting around the birth of his first and only son, also named Quinlin, who recently turned 5. The younger Quinlin started asking for clay to mold at age 3, and his father says that inspired him to press into sculpting, especially after being impressed by some of the boy’s creations.
“I hope he’s a chip off the old block,” James laughed.
James fulfills his son’s constant request for toys with items fashioned from recycled materials like cardboard and bits of foil. He is also currently working on the storyline for a children’s book, illustrated with sculptures instead of drawings, that is inspired by his yet unfulfilled dream to become a Claymation artist and script writer.
The artist says he began to pursue sculpting as a profitable hobby again after a figurine of fellow Syrupmaker J.J. Wilcox, who played football for the Dallas Cowboys at the time, garnered interest among National Football League fans in James’ Texas workplace.
The size and attention to detail demanded by his commissions since moving back to Cairo, usually busts for families who have lost loved ones or figurines of local sports figures like Thomasville quarterback Ronnie Baker, requires that the artist sculpt primarily with wire and clay. However, James explained that he does not limit himself to foil and clay, like he did as a young artist.
“Anything that can take a bend and keep a shape, I try to use,” the sculptor says. “I’m dabbling in all kinds of [mediums] now.”
Because each project is uniquely designed, James says that materials, price, size and time also vary.
The artist estimates that his figurines typically cost $250 and his busts $500. Pieces usually take two or three weeks to finish, if the father finds enough uninterrupted time.
James continues to work on commissions and also aims to complete three donations for his hometown: a miniature clay couch for his workplace, Woodhaven Furniture Industries; a trophy for C.H.S. commemorating the years that his alma mater won state sports titles; and a Christmas decoration for the library to fulfill his pre-pandemic plans.
To young artists today, like his son, James gives the following advice: “Don’t let people discourage you, because that is a gift that is given to you. Many people can’t do that.”
He continued, “When I was coming up, people would say, ‘you can’t make money doing that.’ You’ve just got to keep doing your craft because eventually someone is going to see it and will give you a chance.”
Commission requests can be submitted to the artist’s cell phone, (229) 216-2273, or to his Facebook page, “Quinlin YZ James.”
Posted in News