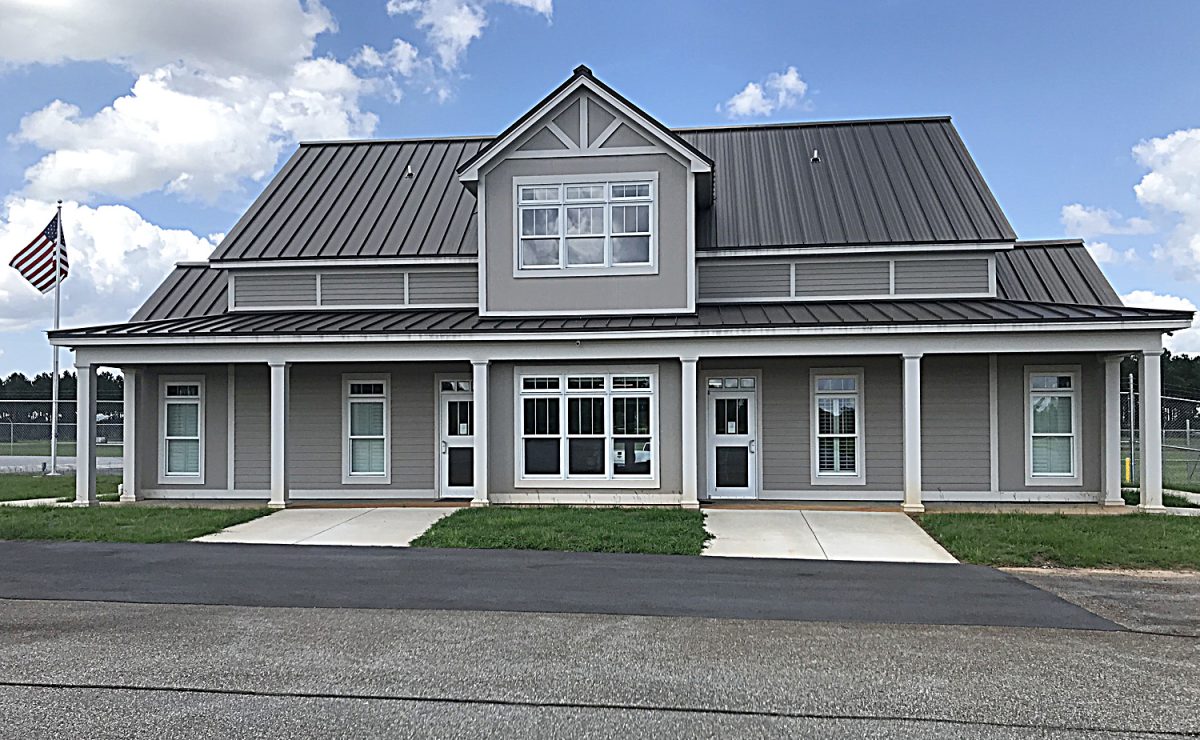 THIS IS THE NEW airport terminal building at the Dawson, Ga. Municipal Airport, located north of Albany. It opened last year and was designed by Croy Engineering, the same airport consultants used by the City of Cairo. The approximately 3,000 square foot facility was constructed at a cost of $559,480. Local leaders hope to build a terminal here for $500,000. (Photo courtesy of The Dawson News)

The Cairo Municipal Airport will soon have a brand new terminal building thanks in large part to an appropriation from the Georgia Department of Transportation’s Aviation Division.

The city has been allocated $375,000 from the state for the project and the city will be required to match with $125,000, which is a 75-25 split.
“We can fund our match from our Transportation Special Purpose Local Option Sales Tax proceeds,” Cairo city manager Chris Addleton told the city council Monday night.
The existing terminal is a former bank branch building that was moved to the airport from the lot where the Cairo Post Office is located on M.L. King, Jr. Avenue, S.W.
“It was moved to the airport in the early 1990s and has long since served its useful purpose,” Addleton said.
Among the deficiencies listed by the city manager are a leaky flat roof, crumbling exterior, and no handicap accessibility.
Plans call for the existing terminal to be demolished and the new terminal constructed at the same location.
“The airport terminal serves as one of our gateways to Cairo and a new terminal is needed to potentially enhance our economic development status,” the city manager said.
“This is a much needed improvement at the airport,” Cairo Mayor Howard Thrower III, said.
Under Addleton’s proposed timeline, the project would be advertised for bids in November and a contract would be issued in February 2022. Addleton said he believes the project could be completed in six months and would not interfere with the terminal serving as a voting precinct for the 2022 elections.
“Have you discussed this with Croy (Engineering, the city’s airport consultants) and is this timeline workable?” Councilman James H. (Jimmy) Douglas asked.
City manager Addleton said that he was scheduling a meeting with Croy Engineering for mid-July and D.O.T. aviation projection manager Ronnie Hall, but in his preliminary conversations with Croy representatives, “this is a very achievable timeline.”
“I was concerned, as well, but they believe we will not have any issues meeting this schedule,” Addleton said.
A new terminal building was constructed and completed at the Dawson, Georgia Municipal Airport last year and it was a Croy project, which was constructed by Kellerman Construction Inc., of Valdosta.
The approximately 3,000 square foot, two-story terminal was constructed at a cost of $559,480.
“We would like to build something just as nice that will serve our needs for years to come, but within our budget,” Addleton said.
Posted in News