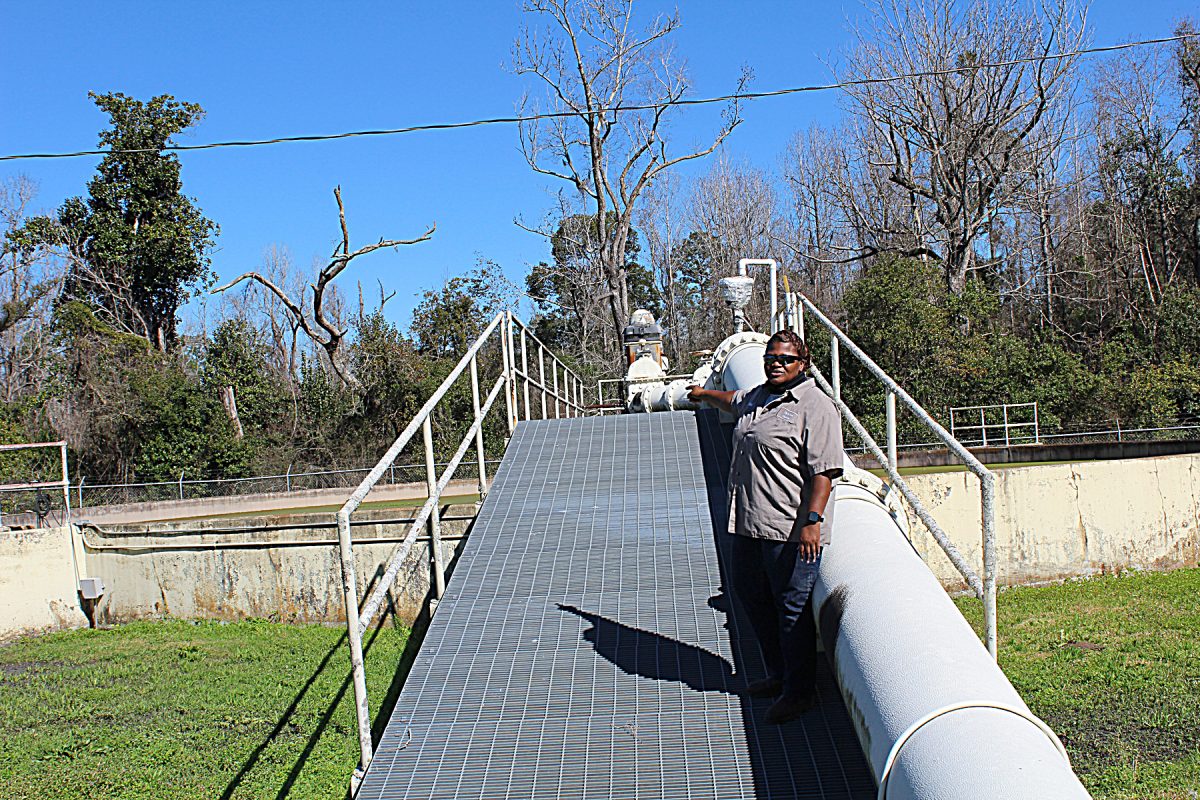 WASTEWATER TREATMENT PLANT operator Vickie Walden points to the basin from which partially treated sewage could be pumped from the plant to a holding pond south of the city during heavy rain events. City officials say this could eliminate the possibility of sewer spills which have plagued the city in 2021.

After recording zero sewer spills in 2020, the year 2021 has gotten off to a bad start for the City of Cairo, but city leaders say they have a plan to address the issue.

Since Jan. 27, heavy rain events have caused hydraulic overload at the city’s wastewater treatment plant in southwest Cairo that has resulted in approximately 141,000 gallons of partially treated sewage to be spilled at the plant.
City officials blame the inflow and infiltration of stormwater into the city’s sanitary sewer system as the cause of the spills. They say with more than 100 miles of sewer pipe running underneath the city, it is difficult, if not impossible to identify all of the trouble spots where stormwater is entering the sewer system, so Cairo city manager Chris Addleton has another plan.
The city manager is proposing to include in the city’s 2021-2022 budget a project to utilize some of the existing infrastructure that was put in place with the city’s defunct Land Application Sewer system that was constructed south of the city on Wight Road.
Addleton shared an overview of his plan with the city council this week. By utilizing the pumping system installed for the LAS, the city can pump partially treated sewage out to the 72 million gallon capacity holding pond during heavy rain events and then when there is not so much rain, the effluent can be pumped back to the treatment plant for final treatment.
“I’d like to go ahead and have the engineering done on this so that if some federal infrastructure money is made available for some shovel ready projects we will have the opportunity to apply for those funds,” Addleton said.
While the lines out to the holding pond are in place, Addleton says the pumps are more than 20 years old and would likely need to be replaced. He is also calling for installation of pipes that would be used to pump the effluent back from the pond to the plant.
And while the pond has a 72 million gallon capacity, the city manager says the city can only utilize 36 million gallons of that capacity due to the limitations of the existing pond liner.
While the city is not under any mandate to do something, Addleton believes that unless the city can address the sewer spills at the plant, eventually the Georgia Department of Natural Resources Environmental Protection Division may initiate action.
Addleton has scheduled a meeting with consulting engineers next week to get the ball rolling.
The city manager also reviewed some of the priorities he has identified to be budgeted in the next fiscal year. Addleton has tentatively budgeted $250,000 for the project and unless federal funding comes available, the city would have to finance the project with Special Purpose Local Option Sales Tax proceeds.
The 2021-2022 budget will also likely include a grit removal system for the wastewater treatment plant at an estimated cost of $650,000, which Addleton is also earmarking SPLOST funds to pay for.
“We probably should have included this when we redid the plant in 2006, but we were short of funds,” Addleton said.
By removing the sand and other grit that enters into the sewer system, Addleton says the plant will operate more efficiently and there will be less maintenance and operation expenses for the plant.
In his budget preview Monday, the city manager noted that the city’s long-term debt has dropped to just below $10 million, from a high of over $22 million in 2005. Addleton says that the city’s Combined Utility 2004 Bonds, which were refinanced in 2014, will be paid off in three years, which will reduce the city’s annual debt service by $905,000 per year. “That will be a tremendous lift off our shoulders,” he said.
Monday’s budget workshop officially kicked off the city’s budget preparation with final adoption slated for June 28.
In other business Monday night, the council:
Heard a report from the city manager that the city’s audited financial statements would be presented to the council on March 8. Councilman James H. (Jimmy) Douglas, who chairs the council’s finance committee, told Addleton that he wanted a copy of the audit to review prior to the day of the meeting with the auditor.
Discussed the need to clip shoulders of city streets around the community to reduce the pooling of water on streets during heavy rains.
Heard a request from Councilman Jerry Cox for the electric crew to investigate some vegetation that is leaning on the electric power lines on 11th Avenue N.W.
Posted in News