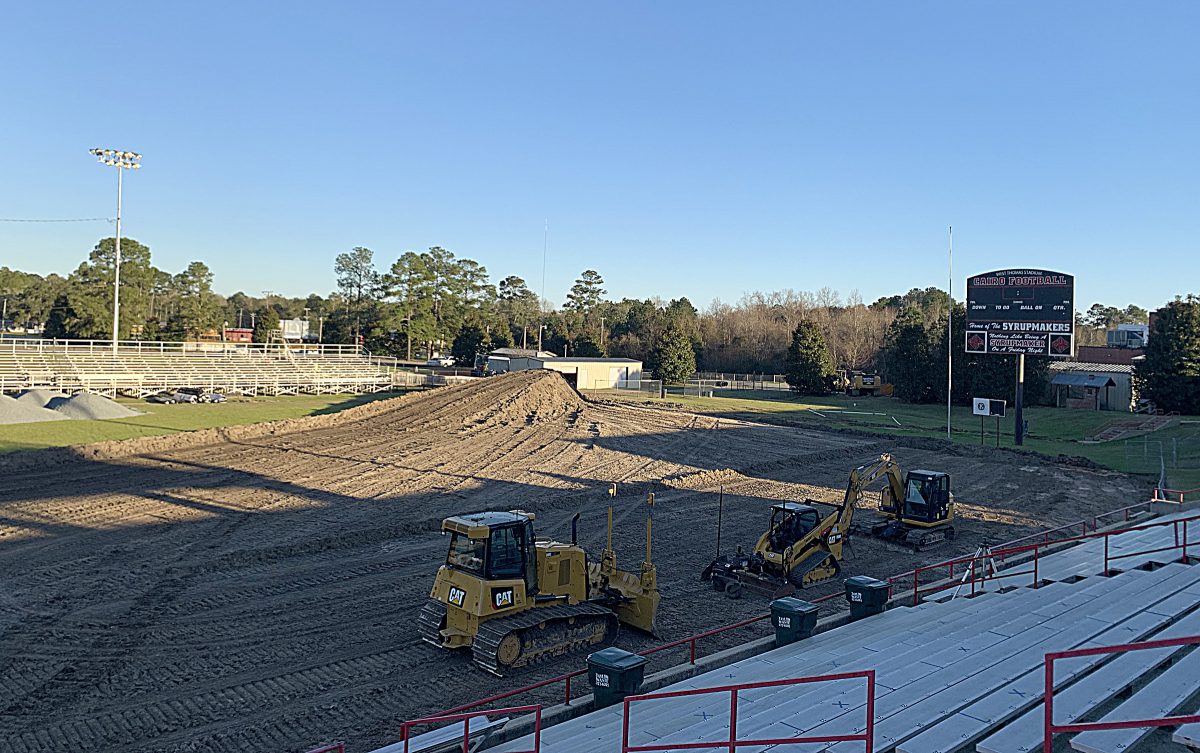 THE INSTALLATION of AstroTurf in West Thomas Stadium got underway Monday, Feb. 22.

The Grady County Board of Education voted unanimously Tuesday night to invest just over $1 million to install AstroTurf on the field of West Thomas Stadium, with work to begin within days and the project to be completed in time for the graduation exercises of the Cairo High School Class of 2021.

The board approved a proposal from Sports Turf Company of Whitesburg, Ga. for $1,006,148, which includes the new field, drainage system, markings and goals for both football and soccer, plus a maintenance plan that extends the manufacturer’s eight-year warranty to 10 years.
As part of the maintenance plan, the field will be inspected annually, the field will be cleaned by certified maintenance technicians, the field will be vacuumed and debris removed, light field de-compaction will be performed, the field will be groomed to level out infill across the playing surface, magnetic metallic objects will be removed, a field disinfectant will be applied and minor repairs will be performed.
In making the recommendation to approve the proposal from Sports Turf, school superintendent Dr. Kermit Gilliard noted that the AstroTurf will extend south of the playing field, which would provide a place for teams to practice while others are practicing on the main playing field. This will require the removal of an existing sidewalk, which will be done by the school system’s maintenance department.
Board member Jeff Worsham noted that the school system was able to move forward with the project due to the fact that the system was able to purchase the Mobley’s Furniture & Appliance store building on Market Street N.E. for the home of the new Grady Educational Center.
The board had anticipated spending $2.5 million for construction of a new facility to replace the existing Grady Educational Center which is currently located in a modular building on the campus of Cairo High School. The school system was able to purchase the Mobley’s building for $600,000 and will invest approximately $400,000 to remodel the interior for classrooms, offices and bathrooms, which frees up Educational Special Purpose Local Option Sales Tax revenue for the turf project.
Board member Teresa Gee Hardy questioned if there were any additional expenses the school system would be responsible for as part of the project. According to Dr. Gilliard, the system would be responsible for installing a drain pipe that would collect the drainage from the stadium field and transmit it south, underneath Syrupmaker Drive and into a drainage ditch located behind the C.H.S. gymnasium. Work that Gilliard said would have to be contracted out and estimates for that portion of the project are not known at this time.
As part of Sports Turf Company’s scope of work, a new field sub-grade will be established using laser-controlled grading equipment to provide a six-inch field crown. Excess soil will be removed for the field and placed on site.
A new field drainage system consisting of 10-inch perforated HDPE collector line will be installed along the edge of the field. The new field drain line will be connected into the existing field drain line that exits the field at the south end. This is the point where the system’s work to tie that line into a pipe going under Syrupmaker Drive will commence.
Additionally, a six-inch by eight-inch concrete perimeter curb will be installed along the North, East and South ends of the field connecting to the concrete bleachers on the West.
New goal posts will be installed and the end zones will be marked with Cairo at one end and Syrupmakers at the other end zone.
Board member Gerald Goosby asked how the drainage issue which causes water to pool underneath the visitors stands would be addressed. Dr. Gilliard said the current proposal is to replace the existing stands and at that time to pave under those stands to eliminate the need to “weedeat” underneath the bleachers and to make it easier to clean underneath them.
Board member Worsham asked if school officials had visited or talked with officials at other schools that had used Sports Turf Company. According to the superintendent, local personnel have met or talked with officials with Thomasville City Schools as well as Lee County Schools, Chiles and Leon high schools in Tallahassee as well as several schools in Macon.
Worsham also asked what would the plan be for soccer since the field work would be taking place during soccer season. According to Dr. Gilliard, arrangements have been made to play most of the schedule away and Cairo would host the Dougherty County high schools at Thomasville High School during the 2021 season.
“Will it be ready in time for graduation?” Vice Chairman John White asked. The superintendent said that the vendor indicated to him that within days of a purchase order being issued the company would have bulldozers on site. “Barring unforeseen issues and if the weather cooperates, they tell me it will be ready in time for graduation,” Dr. Gilliard said.
Work began on the project on Monday, Feb. 22.
In other business Tuesday night, the board:
Accepted a bid of $52,070 from Barber Construction of Moultrie to take out a concrete walk and close up an outside entrance to the underground locker rooms beneath the old C.H.S. gymnasium, water proof the exterior and fill in the site to make ready for the construction of new bathrooms at West Thomas Stadium. The new bathrooms are to be constructed east of the old gym. Finance officer Dan Broome said that this work will be paid for out of the system’s general fund.
Approved payment of the accounts payable for the month, totaling $795,166.70.
Heard an update from the superintendent on the system’s COVID numbers. “Our numbers are getting better, but we are still encouraging everyone to wear their mask, socially distance and frequently wash their hands,” Dr. Gilliard said. Board member Goosby questioned if teachers were being supplied sufficient supplies of Clorox wipes, paper towels, etc. Dr. Gilliard said that the twin oxide used to sanitize the schools does the same job as Clorox wipes and the system is providing all schools with supplies of twin oxide, but not Clorox wipes.
Posted in News