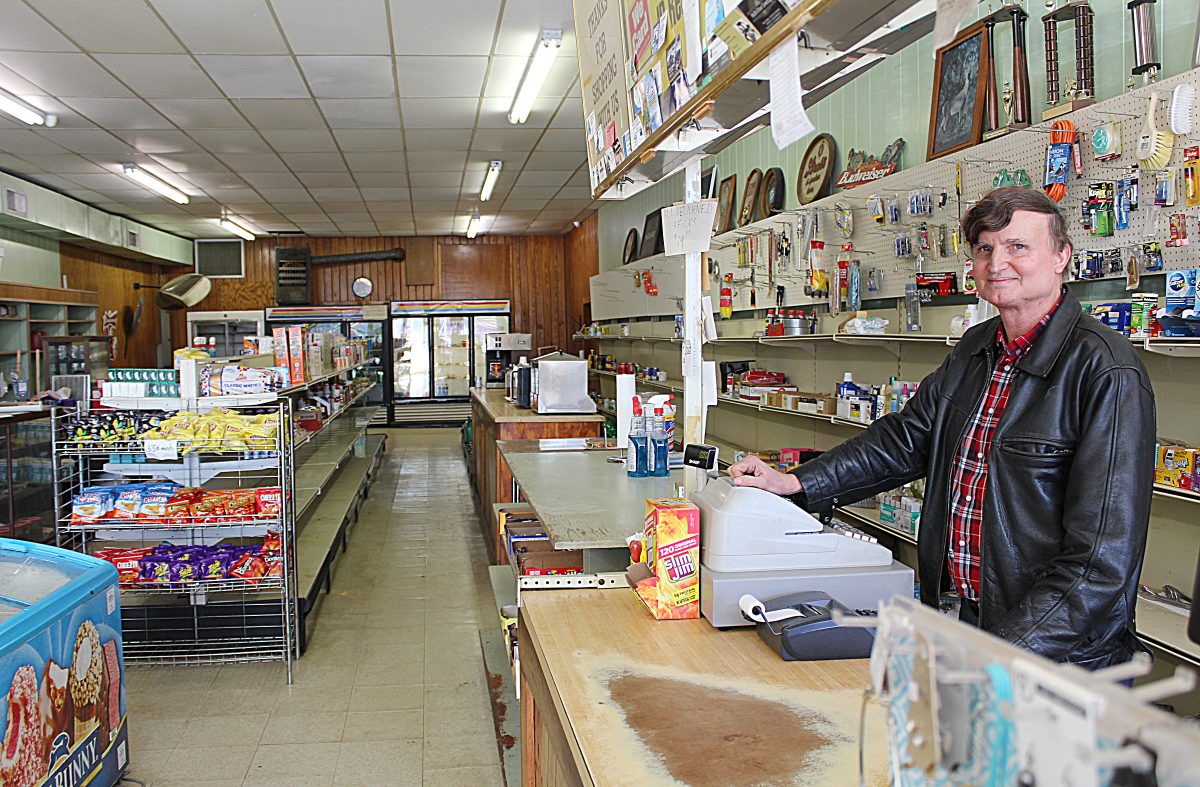 BRUCE THOMAS manned the register at Thomas Mercantile Co. Monday for the last time as the store’s owner.

On Monday, Bruce Thomas closed the doors to Calvary’s Thomas Mercantile Company for the last time as its owner. After 117 years in the Thomas family, the store is now operating under new ownership.

“I’m glad to find somebody like them to buy it and keep it open,” says Thomas.
Although from New Jersey, the new owners have roots deep in Calvary as the daughter and grandson of the late Calvary native Ineza Neal Hughes.
Ethel Hughes and her son, Keith Mays, started operating the store, located at 210 First Ave., in Calvary, Tuesday morning.
“It’s bittersweet,” says Thomas, 62, “I don’t know anything else but this store.”
Bruce and his sister, Sharon Hawthorne, say they were raised in the store under the watchful eyes of their mother, the late Orien Thomas, and father, Gerald D. Thomas, now 92 and retired.
Sharon says of their childhood, “We grew up in the store. I remember taking naps on feed sacks. It was a different time and way of growing up.”
Bruce says after graduating from the University of Georgia his father took over operations of the family store in 1950. “My grandfather (George G. Thomas) was able to send all of his children to college out of this store,” says Bruce.
The second youngest of 11 children, Gerald Thomas was the only sibling who wanted to run the business, his son says.
After several years working exclusively in the store, Gerald Thomas expanded his workload and joined the force at the Grady County Sheriff’s Office. From 1976 to 1984 he served as sheriff of Grady County, his son recalls.
Bruce says during all of that time, his mother could be found running the store. “She worked hard in this place,” he says.
Sharon says even when she was battling cancer, her mother wanted to be in the store. She says, “I was going to relieve mom, but she would continue to come in to the store. One day I told her that I was coming every day to open up the store so that she didn’t have to and I asked her why she was there when she didn’t have to be. She was quick to tell me that to her the store was more of her home, than her house was. The store is where she wanted to be. It wasn’t just where she worked, but where she spent every day and where she raised her children.”
Since it opened in 1904, operations of the mercantile (which Bruce pronounces mercan-teel) have evolved. He says in the 1930’s his grandfather kept a chicken coop in the back of the store and accepted chickens as payment for such items as flour or other dry goods.
“We sold just about anything you could buy anywhere else. It was a true general store,” Thomas says.
In the early days, the store sold products ranging from collars for mules and horses, to seed, shoes, hardware, fresh meats, cheeses and more.
He recalls when shade tobacco was the prominent crop in the Calvary area, and that farm workers crowded into the store during summer months.
“They had me at the door watching how many came in the store,” Thomas says, “I had to limit it to only so many people at a time.”
Before the store’s original board flooring was covered in the 1970s, he says in the mornings they mixed kerosene with sawdust, spread it over the floor then swept it up. “It was a way to keep the dust down,” he explains.
Over the years, he says the store began to phase out some of its products including the fresh meats in the 1980s.
“Suppliers became hard to find,” he explains.
Lately, the 4,650 square foot store has been stocked with soft drinks, snacks, hot dogs, an assortment of home decor, gadgets, gifts, and hardware. They also sell propane and gasoline.
Thomas Mercantile has been a favorite of Messenger readers, consistently winning the Best Country Store award in the newspaper’s yearly contest, “Best of Grady County,” and before he retired, Gerald Thomas was voted Best Store Clerk many times.
New owner Ethel Hughes, who says she owned and operated a hair product store in New Jersey, says she will likely expand on the inventory of Thomas Mercantile. “We’ll get in here and straighten up, clean and organize everything and see what we need,” she says.
Some additions may include food items, linens, hair products and more hardware. “Stuff you need every day,” says Hughes.
Another change is the hours of operations, currently 7 a.m. until 5:30 p.m. Hughes says the store will be open seven days a week, and in coming weeks the hours will extend to 8 p.m.
This is the second business in the area that Hughes has taken on in the last year. Last summer she and her family opened Inez Kitchen in nearby Havana, Florida. The restaurant has a full menu serving breakfast, lunch and dinner, and is now under the management of her granddaughter and niece.
“We have a lot of family here,” she says.
Her daughter-in-law, Patricia Mays, is also joining the family business at the store, and Bruce Thomas says he will continue to work there as needed.
Posted in News