GRADY COUNTY poll workers joined with Elections Superintendent Denise Maddox and her office staff to conduct a hand recount of the Nov. 3 general election results here. The recount was conducted last Friday and was completed in just under five hours time.

President-elect Joe Biden is expected to maintain his lead in Georgia as a statewide audit of nearly 5 million ballots wraps up shortly, despite the discovery Monday of around 2,600 uncounted ballots in Floyd County that went mostly for President Donald Trump, according to a top state elections official.

The Atlanta Journal Constitution was reporting Tuesday that another additional 2,800 additional uncounted ballots were found in Fayette County.
Here in Grady County, election superintendent Denise Maddox reported Monday that she and her team of poll workers completed the manual recount on Friday in just under five hours.
Judge Maddox says the local hand recount is not likely to be “official” but the results were slightly different than those reported on election night.
According to Maddox, the hand recount indicated an additional 15 votes for President Trump and 16 less for former Vice President Biden. The recount also resulted in two more votes for Libertarian Jorgensen.
“I sure am glad the recount is over, although, it wasn’t as bad as I had anticipated it to be. I initially was stressed but everything turned out great. I used 10 poll workers for my audit teams, one worker to enter data and my office staff to help manage paperwork. This was an amazing team. They all did a great job and we finished in a little under five hours,” Maddox said.
She predicts the cost of the recount for local taxpayers to be less than $1,000.
Biden, who is poised to be the first Democratic presidential candidate to win Georgia since 1992, has held a lead of more than 14,000 votes over the past week and after several news outlets called the race for the former vice president on Friday.
On Monday, the state’s voting system manager, Gabriel Sterling, said around 2,600 votes were found through the audit that began last week after officials in Republican-leaning Floyd County discovered they had failed to upload a memory card containing electronic counts of those votes on Election Day.
Locating those 2,600 votes is set to cut Biden’s lead over Trump by 800 votes in Georgia, leaving the Republican president with a deficit unlikely to be surmounted once the audit’s hand recount finishes by a Wednesday deadline ahead of the election’s formal certification later this week, Sterling said.
“Nothing is making us see any substantive change in the outcome,” said Sterling, a top deputy in Secretary of State Brad Raffensperger’s office. “It’s verifying what we saw on election night.”
Speaking at a news conference Monday, Sterling also continued to dismiss claims from Trump and his allies of alleged voter fraud in Georgia as state and county officials gear up to hold a pair of pivotal U.S. Senate runoff elections that could decide the balance of power in Congress.
Republican allies of Trump, led in Georgia by outgoing U.S. Rep. Doug Collins of Gainesville, have lodged unfounded claims of ballot harvesting, software tampering, improper signature verification for absentee ballots and voting by dead persons.
State and county election officials have found no evidence in support of those claims pushed by Trump and his allies after counting 4.3 million of the nearly 5 million votes in Georgia as of Monday afternoon, said Sterling, who along with Raffensperger is a Republican.
“Those people out there undermining this thing through crazy, over-the-top claims on cable news, if you have evidence, call us,” Sterling said Monday. “We will investigate any credible leads someone gives us.”
As for the ballots found in Floyd County, Sterling attributed the issue to human error and “gross negligence” on the part of the county’s election director, Robert Brady, who has been asked to resign by Raffensperger’s office.
State officials had been unable to reach Brady to discuss what caused the issue since the Floyd elections director is in quarantine due to COVID-19, Sterling said. An investigator from Raffensperger’s office is in Floyd County now to determine exactly what happened.
Even with the Floyd County issue, Sterling on Monday called the unprecedented statewide audit effort a success as elections boards in the state’s 159 counties closed in on recounting every ballot by hand. He said the state next plans to create a website to publish data on the recount results for transparency.
“We’re about accuracy, we’re about process and we’re about following the law,” Sterling said.
Posted in News 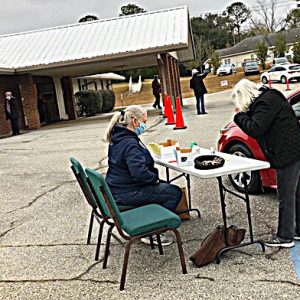 Help Agency makes the holiday a little brighter for the needy 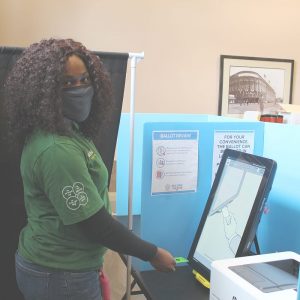