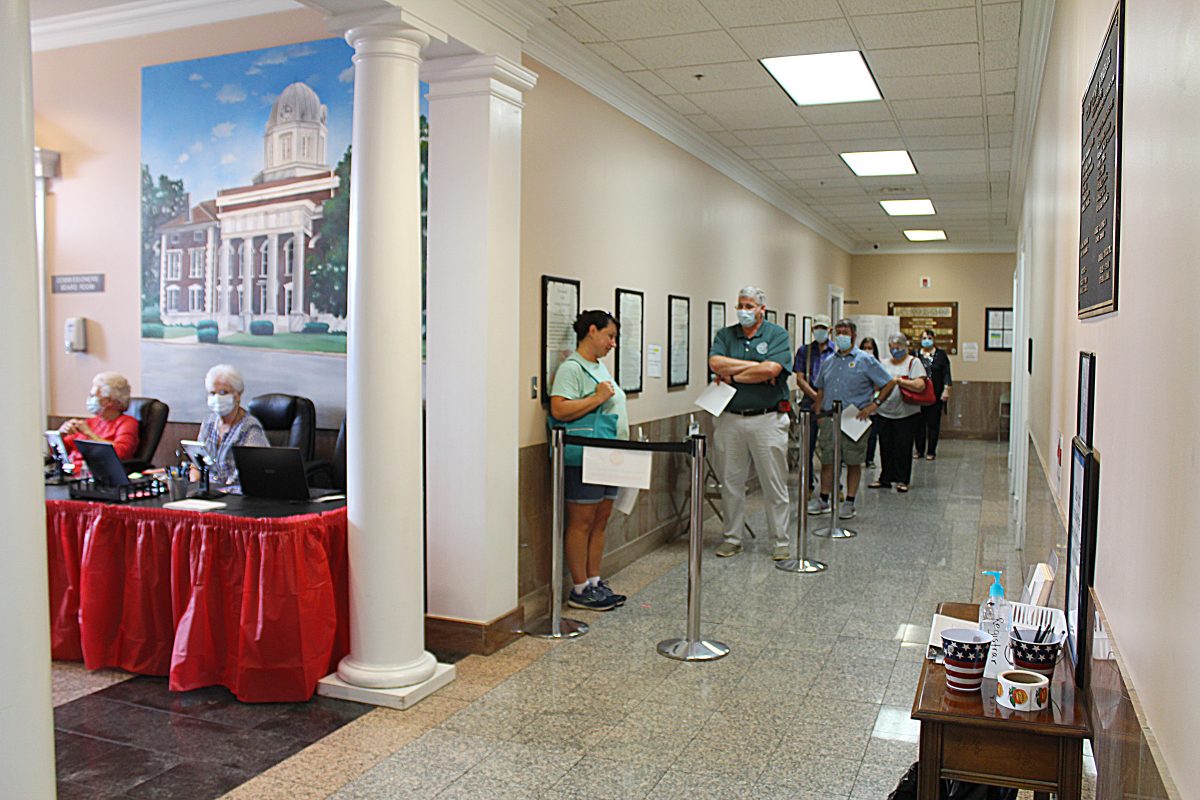 VOTERS LINED UP to cast their votes early at the Grady County Courthouse. As of the close of business Tuesday, 655 ballots had been cast early. By Tuesday afternoon technical issues locked down computers to check in voters through the state’s system.

Technical issues with Georgia’s ElectioNet, the statewide system used to check in voters, locked out the five laptops being used by poll workers at the Grady County Courthouse Tuesday afternoon, according to county Election Superintendent Denise Maddox.

Judge Maddox told The Messenger Tuesday evening that she spoke with each voter and offered them the choice of voting on a paper ballot or coming back at a later date when the system was back online and functioning properly.
“Everyone was super nice and understanding. They all chose to come back and vote later with the machines,” Maddox said.
Similar issues with the ElectioNet were reported across the state and reports of long waits and lines to vote were reported both Monday and Tuesday.
Although local voters did not experience the 10-11 hour waits reported in metro Atlanta, Judge Maddox acknowledged that the process was moving slowly and she noted that interest in the election is extremely high.
A total of 417 voters cast ballots on the first day, which Judge Maddox and Chief Registrar Malinda Butler say they believe is a local record for first day voting of an advance voting period.
On Tuesday, 238 voters cast ballots, and officials did not say how many came to vote but decided to come back later when the technical issues began to shut down the system.
According to the election superintendent, the Georgia Secretary of State’s office planned to shut down the entire system at 10 p.m. Tuesday for maintenance.
The “optimizing” of the system should result in significantly better performance, according to Maddox.
“We definitely have had a record number of early voters two days into advance voting. I am pleased with our performance and the work of our poll workers. Our biggest issue has been the slow check-in process, but hopefully that will be better moving forward,” Maddox said.
The Grady County election superintendent also said she is considering extending hours for advance voting during the final week, Oct. 26-30, but details have not yet been finalized.
In addition to the 655 ballots that have been cast in-person, chief registrar Butler reported Tuesday that nearly 1,100 absentee ballots had been cast and returned as of Tuesday.
“We regret the state’s system has been causing delays. We apologize to our local voters for any inconvenience. Hopefully, this fix tonight will improve operations and speed up the process,” Butler said Tuesday night.
Advance voting is taking place on the first floor of the courthouse and runs from 8:30 a.m. until 4:30 p.m., Monday through Friday. One day of Saturday voting will take place on Saturday, Oct. 24 from 9 a.m. until 4 p.m.
Voters have until Oct. 30 to make application for an absentee ballot, according to Butler. Those who wish to vote absentee but do not trust the Postal Service to get the ballot back by election day are encouraged to drop off ballots in the secure drop-box located behind the Grady County Courthouse.
Posted in News