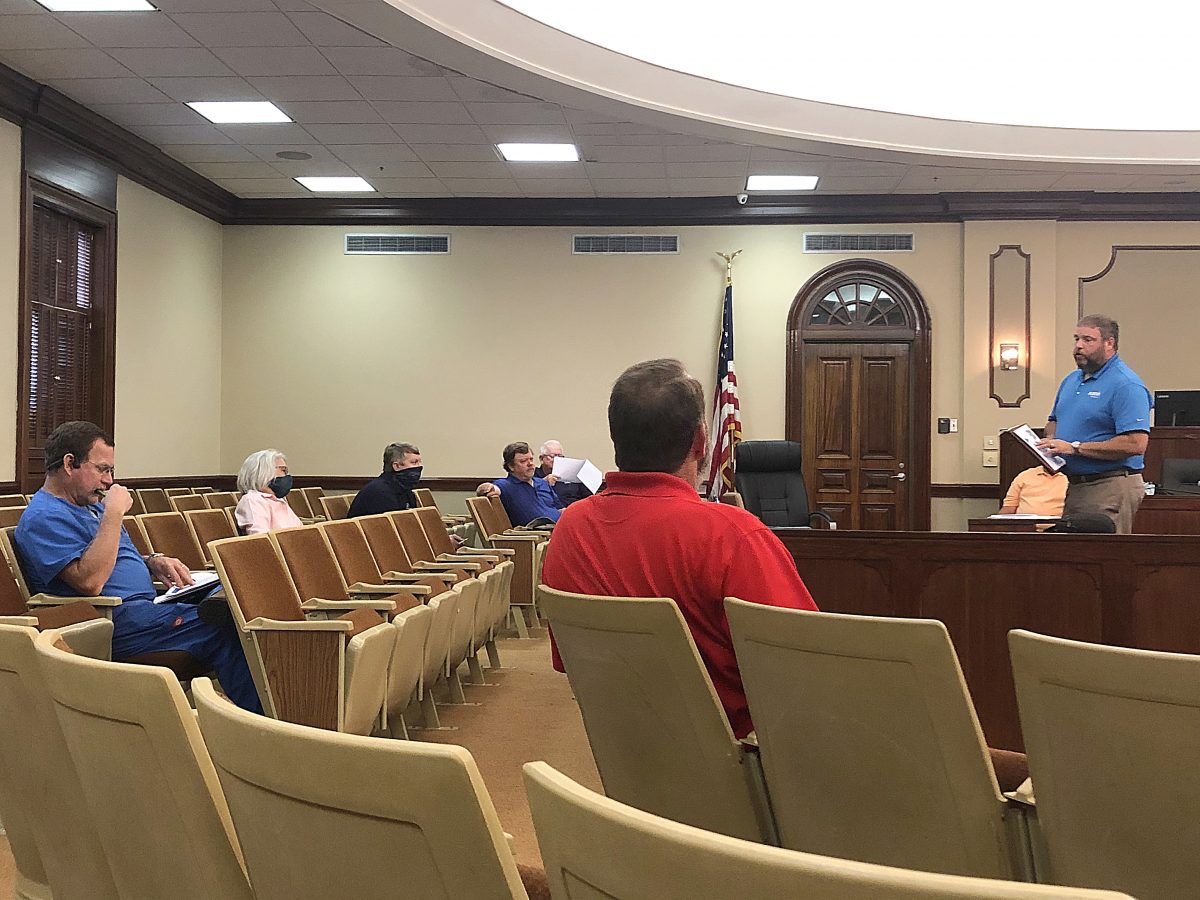 MEMBERS OF THE GRADY COUNTY Lake Authority met with Jason Anderson, right, of ABM Building Solutions Tuesday morning. ABM is pitching the idea it could help the authority have water and sewer service put in place around Tired Creek Lake, which county leaders say is key to the lake being fully developed.

A lack of an existing water and sewer system connected to most of the county-owned property surrounding Tired Creek Lake has made it challenging to get real estate developers interested in the project, a key to turning the multi-million dollar county project into a financial as well as a recreational asset.

During Tuesday’s regular meeting of the Grady County Lake Authority, which was held in the main courtroom of the Grady County Courthouse at 8:30 a.m., a potential consultant told the group that they may be able to help the authority discover a cost-effective way to solve that dilemma.
Jason Anderson with A.B.M. Building Solutions, L.L.C., said the corporation he works for has resources that would look for a solution with no upfront cost to the county.
“If we can’t find a solution, you won’t owe us anything,” said Anderson.
If the company is successful, he said, the authority would not have to make its first payment for services until approximately three years from now.
A.B.M. is one of the largest facility management services providers in the United States.
Anderson said A.B.M. would explore grants and interest rate opportunities and when they devise an agreed upon plan, provide engineering and general contracting services.
“Our business model is not to do analysis. Ours is to find solutions,” said Anderson. “I’m not going to tell you we’re going to solve everything, but we’re excited to try.”
Will Butler, a real estate project and portfolio manager from Tallahassee and consultant for the lake authority, told the members after listening to Anderson’s presentation, “If we can provide a government solution (to the water/sewer issue), that will significantly change the conversation with developers.”
Grady County Commissioner Ray Prince, also a member of the lake authority, said, “we have to have water and sewer and zoning to make it (the lake) work.”
Mike Binion, executive director of the lake authority, pointed out that although fishing at the lake has been very successful, fishing is not going to pay for the needed water and sewer.
“We are doing our due diligence to bring out water and sewer. This is a great start,” said authority member Laura Register.
Authority Chairman Steven Childs asked Anderson about the timeline for the county’s first payment for A.B.M.’s work, should the authority decide to contract with the company. Anderson said it would likely be late 2023 before the county would have to make any payment.
On a motion by authority member Bob Ponder and second by Register, the group agreed to recommend to the Grady County Commission that a Request For Qualifications (R.F.Q.) be advertised to open up the process to A.B.M. and other interested parties to submit a proposal to help the authority with the water and sewer matter.
Grady County Commission Chairman Keith Moye, who sat in on a portion of the authority’s meeting, asked Anderson whether A.B.M. has a relationship with the U.S. Army Corps of Engineers. Anderson said although the company does not have a direct contact with the Corps, they have other contacts who could help with that relationship.
Butler said the lake authority and county are close to finalizing an agreement with the Corps that will delineate in detail what property is controlled by the Corps and that which is under the county’s control.
Authority member Chip Wells asked Butler about that timeline. Butler said, “I hope to have a final resolution in 60 days.” Still, he said that should not delay any progress on proceeding with an R.F.Q.
Binion and Childs presented the authority’s recommendation to proceed with an R.F.Q. to the Grady County Commission, which met at 9 a.m. in the commission chambers in the courthouse. The commission approved the recommendation.
A.B.M. already has a separate contract with the Grady County Commission to audit its energy and facility needs. A.B.M. presented its findings last month, and after recommending certain modifications, guaranteed savings to the county, stating if the county does not realize the savings that are projected, A.B.M. writes the county a check for the difference. If the county realizes greater savings than projected, the county has that additional revenue to invest or spend as necessary.
The firm has also been contracted by the Grady County School System for a similar project.
In other lake authority business, the group is continuing to search for a secretary to volunteer to keep minutes of meetings.
Binion told the group, “it could be someone in the community who wants to give back.”
On consensus, the group agreed to reach out to the Grady Growth Marketing and Development Committee to see if they know of a candidate.
Spraying for hydrilla in the lake is a priority at the moment, according to Binion. “It’s getting bad out there,” he said.
Posted in News