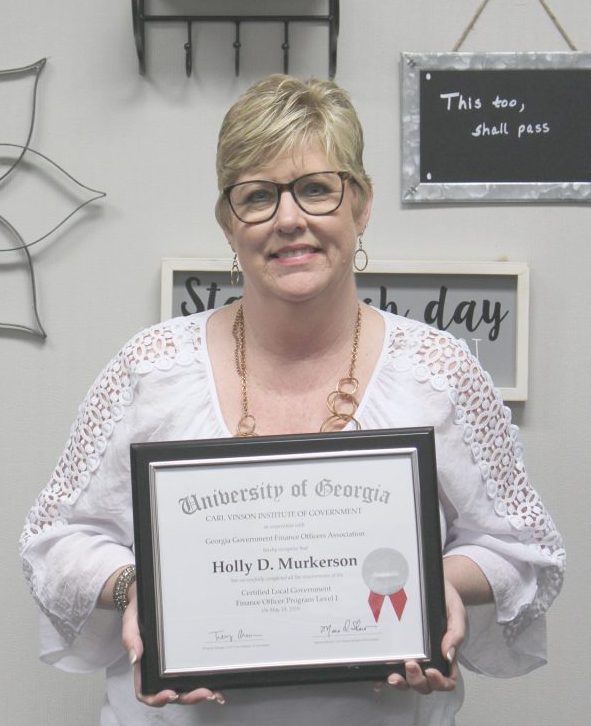 GRADY COUNTY FINANCE DIRECTOR Holly Murkerson recently completed level one training for local financial officer certification. She has served the county in this role since November 2018.

Grady County’s auditor presented the 2019 audited financial statements to the county commission this week and the report included one a single finding, one which auditor Perry Henry said could never be resolved.
From a high of 12 significant reportable findings in the audit for 2017 when Henry became the county’s auditor to five in 2018 and now to only one for 2019, the county’s auditor said that it would be practically impossible and infeasible financially to eliminate the internal control finding in the audit.
“That one’s going to always be there,” Henry said.
The auditor said that a clean opinion is not a full fledged guarantee, he said nothing is perfect and things would need to continue to be “tweaked.”
Grady County administrator J.C. (Buddy) Johnson III, took the opportunity to publicly praise county finance director Holly Murkerson and the entire county commission staff for their efforts to get the county’s financial records in order.
Johnson also complimented the auditor and said that he had been extremely helpful, in every way he could, to offer guidance and suggestions to Murkerson along the way.
“You’ve got a lot of really good people working in the various county offices. They work hard to do a good job. Some may need a nudge in the right direction, but all in all you’ve got really good people. You really do,” Henry said.
The county’s auditor in reviewing the audited financial statements with the board on Tuesday noted that the county’s cash increased by $1,901,643 to a total of $8,738,131 on Dec. 31, 2019. He also noted that the tax commissioner’s office collected just over $3.4 million in January and February 2020, which in a normal year would have been received in 2019.
The audit reveals that in 2019 the impact of the Old 179 project was substantial to the county’s overall finances. Governmental fund revenues were up $5,582,995, or 29 percent, in 2019, with about $4 million of that being in the form of grant revenue from the state to finance the road project.
Likewise, expenditures for the governmental fund were also up 34 percent, or $6,396,554, with much of that expense being related to the Old 179 project.
Henry said if the Old 179 project and other capital outlay and debt service was backed out of the total, governmental fund expenditures for the year actually decreased two percent or $300,005 and the general fund expenses were up slightly at 1.33 percent or $174,484 in 2019.
“I couldn’t be happier with the findings this year,” Johnson said.
In other business Tuesday, the board:
Reappointed Linda Drew Johnson to the Board of the Grady County Department of Family and Children Services.
Named Vice Chairman Phillip Drew as the county’s voting delegate for the upcoming virtual meeting of the Association County Commissioners of Georgia.
Voted unanimously to contract with Raymond James to complete the annual bond disclosure report.
Approved the purchase of a new tire changing machine for the county’s maintenance shop at a cost of $7,288.45 from Mohawk Resources.
Authorized Johnson to shop for a used pickup truck to replace a 2005 truck currently used by Animal Control, which is in need of a new engine. According to Shop Superintendent Chris Dix, the truck had 179,000 miles when the county purchased it and has 231,000 miles presently.
Authorized the county to advertise for proposals from vendors to mow the county’s rights-of-way. Commissioner June Knight had requested obtaining a quote in order to determine if the service could be privatized and done more efficiently and economically than by the county’s road department. “It don’t hurt to look,” Commissioner Ray Prince commented.
Heard a request for updates on road repairs to Open Pond Road and Mizpah Church Road from Commissioners Knight and Prince. Administrator Johnson said he is in the process of scheduling a meeting with consulting engineer Stacy Watkins to formulate a plan on moving forward with planned road projects.
Posted in News