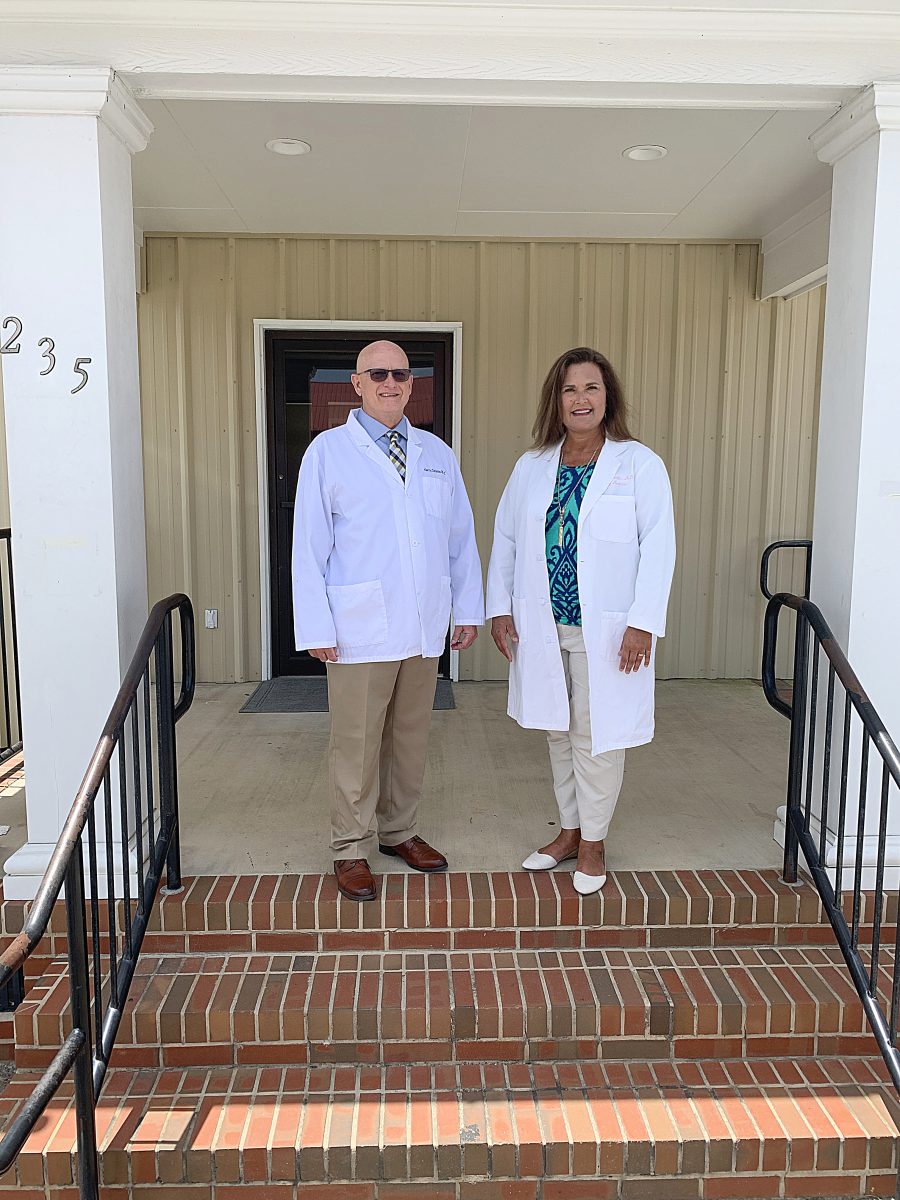 DR. KIMBERLY HARBIN, pictured, is in the process of purchasing Grady Primary Care from the estate of the late Dr. Andrew Dekle. Dekle’s Physician Assistant Kerry Dinkins, also pictured, will remain on board.

On Monday, the medical practice in Cairo belonging to the late Dr. Andrew Dekle reopened its doors for this first time since his tragic death more than three weeks ago. Thanks to a local emergency department doctor and many of Dekle’s employees, the practice will be able to continue treating patients as of this week. Dr. Kim Harbin is in the process of purchasing Grady Primary Care from Dekle’s estate.

“I recognized almost immediately that there was a void in this community left by Dr. Dekle’s death, because he provided so many people essential and important care and compassion,” says Harbin.
She says his patients, suddenly without their doctor, were coming to the emergency department for refills of prescriptions. “That’s not a good way to have care,” Harbin explains. “People on medications need someone checking on them, seeing how they’re doing.” Other medical practices in Cairo were unable to quickly absorb Dekle’s patients into their schedules, she says.
Until the purchase of the practice is completed, Grady Primary Care will continue to operate by agreement, according to estate executor, Travis Dekle.
Although it will likely be October before Dr. Harbin can join the practice full-time, Dekle’s physician assistant, Kerry Dinkins, will continue to see patients at Grady Primary Care’s office, which is located at the corner of First Avenue and Third Street N.E.
In September, Family Medicine Nurse Practitioner Cindy Caldwell will join the practice full-time, Harbin says.
Harbin says she will work part-time at the office for the next two months until she has met her obligations to the many area emergency departments where she works, including Grady General Hospital.
Travis Dekle, the eldest son of the popular local physician who was killed July 10 in a mowing accident on his farm in Mitchell County, said he thinks Dr. Harbin is a perfect fit for the medical practice.
“My dad’s clinic was unique. You didn’t come there to get referred to another doctor, you came to get whatever needed done, done,” says Dekle. “I can say with certainty that she (Dr. Harbin) has the same goals for the community, to provide health care that’s needed. She has the compassion and she has the skills.”
Dinkins, who says he had worked off and on with Dekle in various positions for 40 years, the last three as his P.A., is optimistic about the practice’s future.
“Anyone who knew him (Dr. Dekle), knew that he was a one-of-a-kind doctor. As much as he cared for his patients, and as much as he will be missed in the medical community, he would have wanted his practice to continue and his patients to be taken care of and receive the care that each one deserved,” Dinkins says. “Dr. Kimberly Harbin has spent many years providing excellent care for people in need through the emergency department in Grady and surrounding counties. She has a desire to continue the legacy of care that has been provided by Grady Primary Care. I believe that she is an excellent fit for this position, and I am looking forward to working alongside of her in her new role.”
Dr. Harbin says Dr. Dekle was a talented clinician. “He was definitely an old school doctor with a modern way of thinking about how to run a practice to accommodate patients and not just relying on whether they could pay with insurance,” she says. “I’ll never be Andy Dekle and what he meant to this community, but I want to try to continue what he started and keep his legacy alive.”
Harbin, 52, is a native of Dearing, Georgia, who originally attended University of Georgia with aspirations of becoming a lawyer. After three years, she says she discovered the law was not her calling, so she moved back home and later graduated from Augusta State University with a bachelor’s degree in biology/pre-med. She continued her studies at what was then Medical College of Georgia where she also completed her internship and residency in family practice. Harbin and her husband, Nick, moved their family to Cairo in 2002 to work in Grady General’s emergency department.
She says she is now looking forward to working in a traditional medical practice. The office will be open, 8:30 a.m. until 5 p.m., Monday through Friday and 8:30 a.m. until noon on Saturdays.
Harbin says although some of Dr. Dekle’s employees will remain, patients will also notice many new people working there.
Posted in News