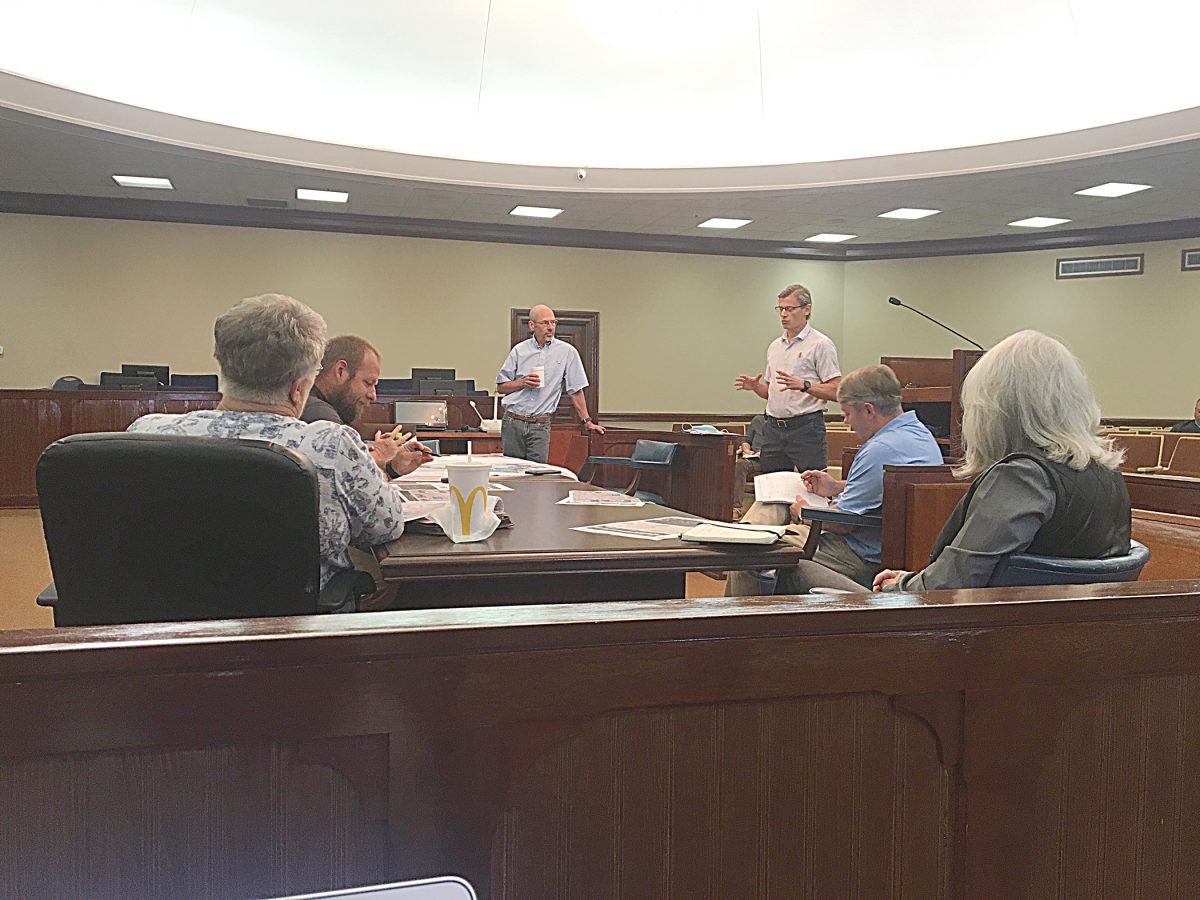 THE GRADY COUNTY COMMISSION and members of the Grady County Lake Authority met with consultant Will Butler, center, and land planner Charlie Johnson of Wood & Partners last Thursday to discuss the possibility of developing an RV park and a trail system at Tired Creek Lake.

The Grady County Commission and a couple of members of the Grady County Lake Authority met May 7 with two consultants who have been involved with the Tired Creek Lake project for the last several years.
Local officials met with authority consultant Will Butler and land planner Charlie Johnson of Wood & Partners to discuss the opportunities for development of an RV park at the lake as well as a trail system for walkers, hikers and bicyclists.
Butler identified an area on the North end of the lake that he said would be “well suited” for an RV park.
The lake authority’s consultant acknowledges the popularity and demand for RV parks like the one that could be developed at the lake as a phased project.
A 50-acre tract has been proposed for the development, according to Butler.
“If we get more folks looking at this lake, we have the opportunity to attract developers,” Butler said. He added that nothing that was being considered would “bugger up future development. Butler was adamant that future development would not “be looking at RVs” but would have views of the big water.
Butler also endorsed development of a trail system and he noted the popularity of similar trails in and around Tallahassee. The lake authority consultant said it was not proposing the “Mac daddy” of trails, but something that would be relatively inexpensive to construct and maintain, but could also easily be rerouted or abandoned as future development demanded.
Johnson told commissioners and authority members that the Tallahassee Mountain Bike Association would coordinate with Wood & Partners on a trail system at the lake. “We don’t want to give you something you can’t maintain and we will not design anything that will impact water quality of the lake,” Johnson said.
The Wood & Partners proposal for master planning for the RV park and the trail system would be $14,500. The next step would be to have the plan engineered and from those engineered plans cost estimates could be determined and the authority could make a decision whether or not to recommend the county move forward with the project.
If feasible, the county has expressed interest in financing this project with public funds.
Commissioner Ray Prince, who also sits on the authority, said it would need to be an RV park that could be built in phases. Butler agreed, but he said that the common area amenities would need to be designed to serve the first phase as well as subsequent phases.
Butler recommended limiting the investment in the RV park and the trail system until usage and interest could be gauged.
Lake Authority member Laura Register asked if the plan was to allow for horseback riding on the trail system. Johnson and Butler were both supportive and said there is a strong demand for equestrian trails by horse owners. “They don’t have a lot of opportunities,” Butler said and Register replied, “no they don’t.”
Officials voiced concerns about the affordability and profitability of an RV park and asked Johnson for his advice since he has been involved in similar developments elsewhere. One project Wood & Partners has been involved in is a motor coach resort at Hilton Head, South Carolina. Johnson said the local project could not compare and admitted an RV park here would be challenging.
Authority Vice Chairman Chip Wells questioned commissioners if an RV park was really a project the county could afford to take on and properly maintain at this point in time.
Grady County Administrator J.C. (Buddy) Johnson III, responded to Wells saying if the authority did not think it was a project that should be pursued then the authority could bring that recommendation to the board.
Lake Authority executive director Mike Binion and Commissioner Phillip Drew shared some of their experiences with camp grounds. Drew said he did not think the county would have an issue with litter in the RV park because the majority of RVers “respect what they’ve got and they respect the land.”
Binion said that at many campgrounds, the camp ground hosts are volunteers who are allowed to camp at no charge in exchange for serving as managers and they also clean the bath houses. Binion says that based on his experience, he believes there would be a demand for campsites at the lake.
No decisions were made last week and the commission and authority are scheduled to meet again on May 19 prior to the commission’s 6 p.m. meeting. The authority’s next regular meeting will be June 1 at 8:30 a.m.
Posted in News