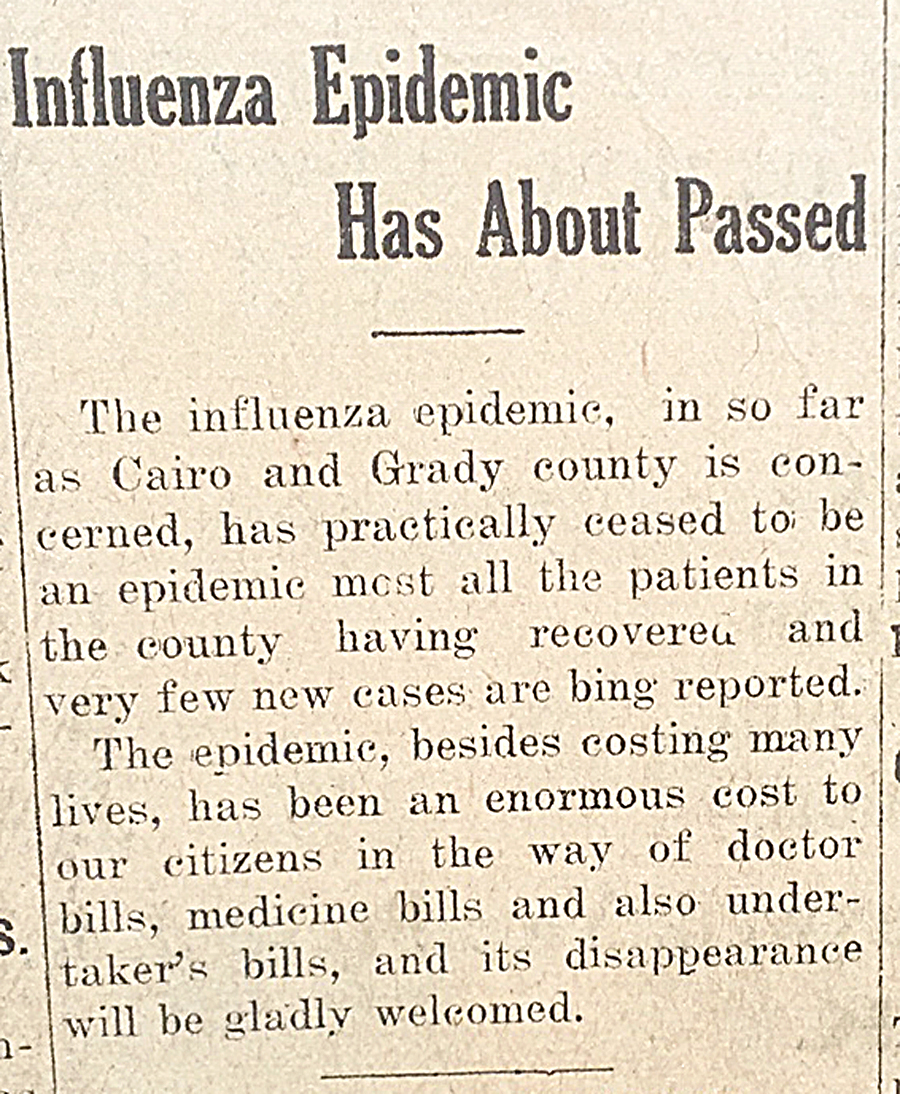 THE OBITUARIES continued to be published, but by Feb. 7, 1919, this news brief on The Messenger’s front page appeared to be the end of the local struggle with the pandemic.

History has a way of repeating itself and while COVID-19 has wreaked havoc locally, in the state, nation and world, the deadly influenza pandemic of 1918-1920, commonly referred to as the Spanish Flu, was just as troubling here in late 1918.

Grady Countians are likely stunned that local churches will not be filled for Easter Sunday services this weekend, but in December 1918, the local churches were empty at Christmas.
Local schools have been closed since last month, and last Thursday, Georgia Governor Brian Kemp ordered schools statewide closed through May 30.
In October 1918, local schools were ordered closed and did not reopen until January 1919. During the current pandemic, local students are still being instructed by their teachers via the internet and with take-home work packets, a luxury the schools did not have in 1918.
However, when schools reopened in January 1919, it was decided that students would report to school on Saturdays and into the summer to make up for the lost time. That will not happen in 2020, according to Grady County school superintendent Dr. Kermit Gilliard.
Grady Countians and others across the nation are being encouraged now to wear facial masks to protect themselves and others when going out of their homes. The Messenger published a front page article in 1918 with tips from a local physician on how to properly construct a facial mask using gauze.
And while schools, churches and public gatherings were closed or prohibited in 1918, there were no regulations on the local businesses. In fact, in the Dec. 27, 1918 edition of The Messenger, the newspaper reported, “Never in the history of our town have the merchants experienced a busier or more successful Christmas shopping season.”
The front pages for week after week from late 1918 until early 1919 were filled with news of deaths of those who had succumbed to the influenza, both young and old and even a popular local pastor.
Just as local residents more than 100 years ago were urged to take precautions, Grady Countians today are encouraged to practice extreme hygiene, practice social distancing, shelter in place as much as possible and to avoid groups of 10 or more.
Posted in News