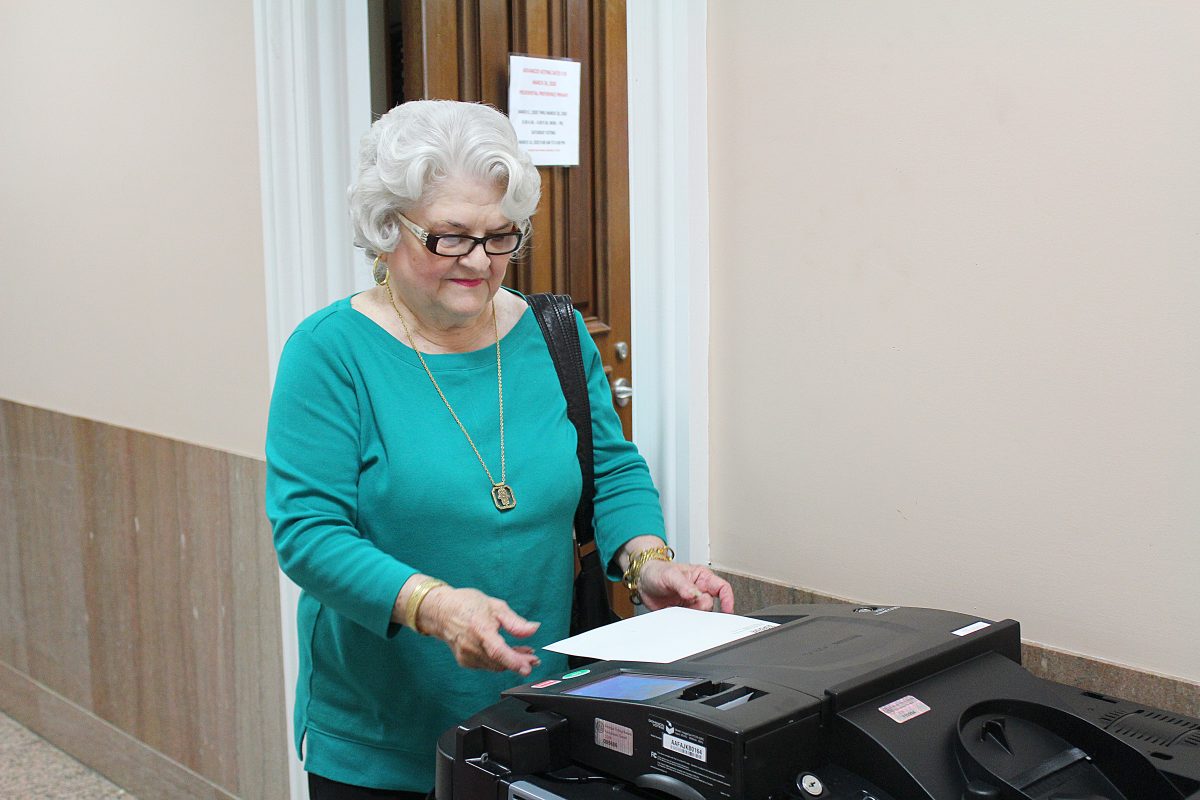 ELIZABETH R. FAIRCLOTH inserts her paper ballot into the new scanner to be tabulated. Faircloth is one of 94 voters who has cast a ballot during the first two days of advance in-person voting at the Grady County Courthouse.

Grady County voters joined voters across the state Monday to cast ballots in the 2020 Presidential Preference Primary using the state’s new voting machines. This is the start to a busy 2020 election cycle, which will include the primary election in May and the general election in November plus any potential run-off elections.

As of the end of business Tuesday, 35 democratic ballots had been cast and 59 republican, which is unusual since there is no contested race on the republican ballot.
Former Massachusetts Governor Bill Weld is challenging President Donald J. Trump for the republican nomination, but some states, including Georgia, are not giving voters a choice. Only Trump’s name appears on republican ballots.
On the flip side, the democratic ballot includes names of candidates who have dropped out of the race since the ballots were prepared. A total of 12 candidates for the democratic nomination for president appear on the ballot, but as of Tuesday, the only candidates who actually remain in the race are former Vice President Joseph R. Biden, former New York City Mayor Michael Bloomberg, U.S. Senator Bernie Sanders, U.S. Senator Elizabeth Warren, and U.S. Congresswoman Tulsi Gabbard.
The names of Michael Bennett, Pete Buttigieg, John Delaney, Amy Klobuchar, Deval Patrick, Tom Steyer, and Andrew Yang also appear on the ballot, but they have all suspended their campaigns for the democratic nomination.
On just the first day of early voting Monday, 17,577 Georgians have cast ballots in person on the new paper-ballot voting machines. Of those, 10,855 voted in the Democratic primary, 6,646 voted in the Republican Party primary.
“We faced a Herculean task in providing a secure and reliable voting system for the state of Georgia in just a short time period but early results indicate that the new system is a success,” said Secretary of State Brad Raffensperger. “I look forward to seeing my fellow Georgians cast their ballots on the new paper-ballot voting machines. We are confident that the machines will take us through statewide elections not just in March, but long into Georgia’s future.”
Advance in-person voting is now taking place at the Grady County courthouse and is no longer taking place at the courthouse annex.
Voters sign in with poll workers in the courthouse lobby, then vote in one of the rooms on the first floor occupied by the Board of Registrars before completing the process by inserting their ballots into a scanner, which is in the main first-floor hallway of the courthouse.
Grady County Election Superintendent Denise Maddox said the new system works very similarly to the old machines with the exception that the new machine prints out a paper copy of the voter’s ballot, which they can inspect to insure accuracy before placing it in the scanner to be recorded and tabulated with all other votes. Maddox says poll workers are available to assist any voter who has questions or concerns about using the new voting system.
Early voting runs through Friday, March 20 at 4:30 p.m. Voters  may also vote on Saturday, March 14 from 9 a.m. until 4 p.m. at the courthouse. Enter the courthouse through the north door, on the side closest to Roddenbery Memorial Library, officials say.
Election day for the Presidential Preference Primary is Tuesday, March 24, and the county’s 13 polling places will be open from 7 a.m. until 7 p.m.
Posted in News