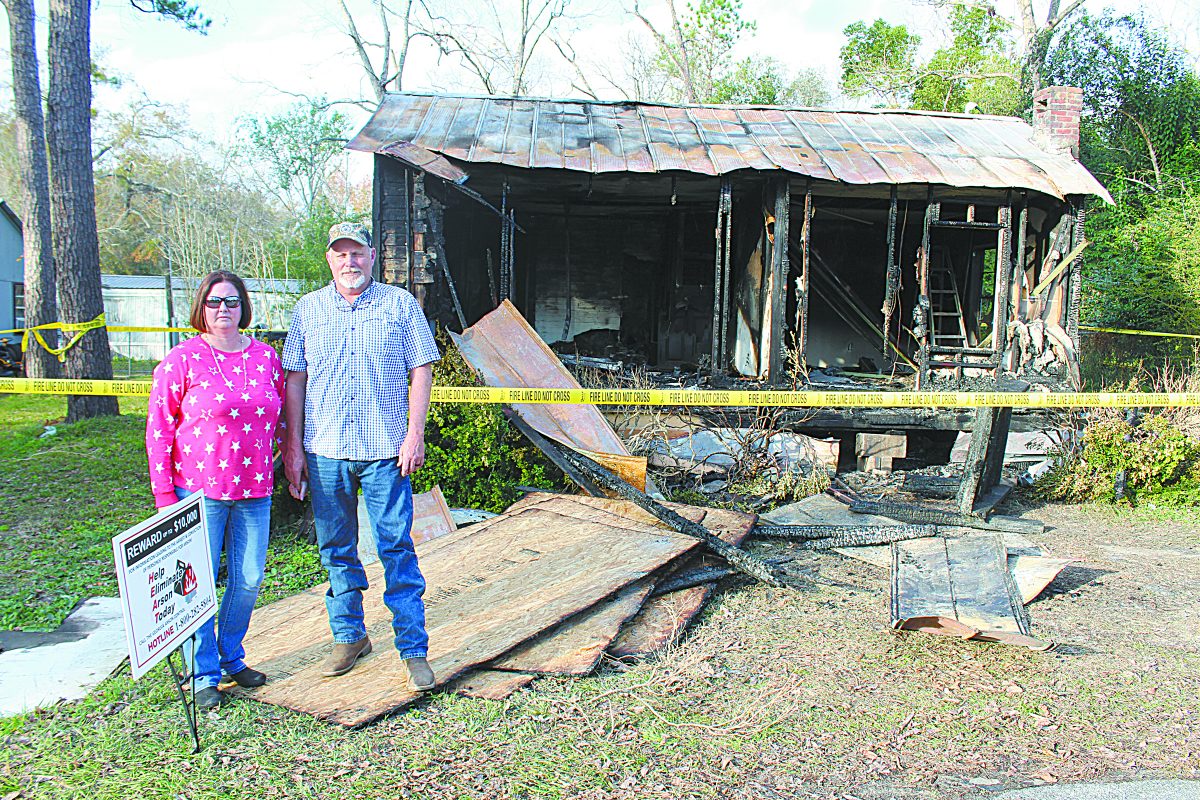 TRACY AND BERRY DODSON are grieving the loss of their rental property, which they were renovating for a special family in need. The mother and son were due to move in later this month.

A home being renovated for a Cairo family just in time for the holidays was destroyed by fire early Tuesday morning, and the Cairo Fire Department has determined it was arson.

A reward is being offered for information about who may have started the blaze. Owners of the property say they are heartbroken. They had started refurbishing the house in September for a single mother and her teenaged son, a Cairo High School student, and were two weeks away from completion. “This was going to be a safe and affordable house for them to live in because the situation they’re in is not the best,” says Tracy Champagne Dodson, who owns the house with her husband, Berry. “It was going to be somebody’s home for the holidays. Now, it’s gone.”
Cairo Fire Chief Bill Schafer says the fire was reported at approximately 4:30 a.m. Tuesday at 290 Fifth Ave. S.W. in Cairo. “When the fire department arrived on scene, the residence was fully involved,” states Chief Schafer. “Fire Department personnel were able to extinguish the fire and prevent it from spreading to surrounding homes.”
The fire started on the porch and spread through the attic to the rest of the house, according to a statement from C.F.D. Because the house was vacant and still under renovation, it had no electricity or gas supply.
Dodson says the wood frame house was approximately 800 square feet, with two bedrooms and one bathroom. Crews had finished painting the interior of the house on Monday, and were preparing to put down flooring this week, the owners say. Because it was vacant, the structure was uninsured. “Our insurance wouldn’t cover it until they were three days to move-in,” says Dodson. Since the house had no power or gas to it, she says, fire never even crossed their minds as a possibility.
“It survived the hurricane (Michael) and had only minor damage in the tornado. We thought this is a tough little house,” Dodson says.
Dodson says, luckily, a neighbor’s dog awoke the neighbor and alerted him to the fire so he was able to call 911.
“I’m so thankful nobody was hurt. I’m thankful for the neighbor’s dog and their house and other houses around were safe. I’m thankful for the Cairo Fire Department,” says Dodson, who works as an agriculture teacher at Whigham School, where she goes by her maiden name, Champagne. Her husband works as a supervisor at May Nursery in Havana, Fla. “We’re working people, but we’re blessed. . .unfortunately, we can’t afford to rebuild now,” Dodson says. Instead, they will have to remove the charred remains and let the lot sit vacant for the foreseeable future. As for the family who was planning to move into their new home, Dodson says they will have to remain where they are or find somewhere else to live.
“This is not right. It didn’t just hurt us, it hurt another family that was looking forward to having a home for the holidays. They had picked out paint for the outside of the house and the landscape, I mean it was all coming together,” says Dodson.
Anyone with information about the fire or who may have started it is asked to call the Cairo Fire Department at (229) 377-3293, or the Georgia Arson hotline at 1-800-282-5804.
Posted in News