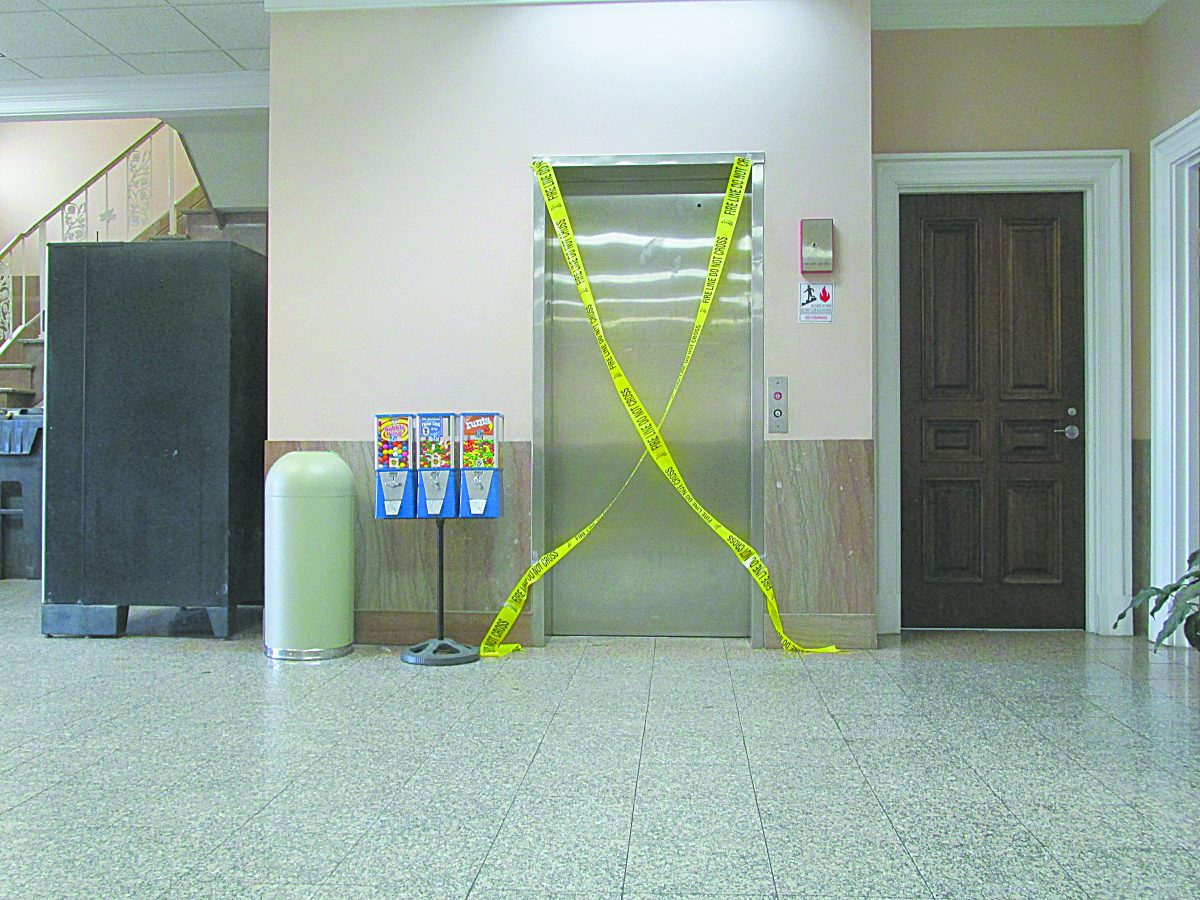 THE ELEVATOR in the Grady County Courthouse remains closed after three people were temporarily trapped inside it last week. The county is soliciting bids for repairs.

The Grady County Courthouse elevator remains inoperable this week after a malfunction left three people trapped briefly in the single car last Wednesday.
Grady County Administrator J.C. (Buddy) Johnson III, says the three individuals were quickly rescued by members of the Cairo Fire Department.
According to Johnson, the three people entered the elevator to go to the second floor courtroom last Wednesday and the doors closed but the elevator car did not go up and the doors would not open.
Johnson says the people were trapped for not more than 10 minutes.
The county has received a bid of $32,400 to repair the faulty hydraulic shaft, but the county administrator is attempting to get additional bids. He briefed the county commission Tuesday night.
Commissioner Ray Prince sought additional information as to the extent of the problem and the proposed repairs. Johnson admitted his knowledge of such matters was limited, but from what he had been told the shaft would have to be replaced and the existing one taken out in sections.
“The cost is in the labor. They’ve got to cut it in pieces to take it out,” Johnson said he had been told.
Commissioner Prince questioned why the shaft could not just be rebuilt on site.
Johnson said all he was seeking from the board this week was permission to move forward with repairs at the lowest cost possible. “We will ask more questions and share more information with you, but we’ve got to get it fixed,” Johnson said.
The single elevator is the only access to the two courtrooms available to handicapped citizens.
County officials says they are unaware of any major work being done to the elevator since it was installed when the courthouse was constructed.
The board gave the administrator its unanimous support to accept the lowest bid that can be obtained and to move forward with the necessary repairs.
In other business Tuesday night, the board:
•Authorized the execution of 36-month leases with Enterprise Fleet Management for three new vehicles for the Grady County Sheriff’s Office. The vehicles to be leased are two 2019 Dodge Ram 4×4 Crew Cab trucks and one 2019 Dodge Durango SUV.
•Accepted the low bid of $25 per ton for lime rock ($7,500) and $42.80 per ton ($21,400) from Calmart Inc. for crushed asphalt to be used in the construction of a new manned garbage site located on Ridge Road that is currently under construction by county forces. The county also received a higher bid from Southern Concrete, which bid $29 per ton for the lime rock and $47.75 per ton for the crushed asphalt.
•Heard a report from the county administrator that he had authorized the purchase of 16, 6-yard dumpsters to replace burned out, rusted dumpsters at a cost of $10,000 from Lewis Steel Works Inc., of Wrens, Ga.
•Approved partnering with the National Association of Counties and the Association County Commissioners of Georgia to participate in a new program for the collection of American flags that need to be properly disposed of. Each participating county will be provided a collection box where residents can drop off flags that need to be retired. The local commitment is to work to identify a location for the collection box that is secure and easily accessible and a community partner that will check the box and properly retire flags as needed.
Posted in News