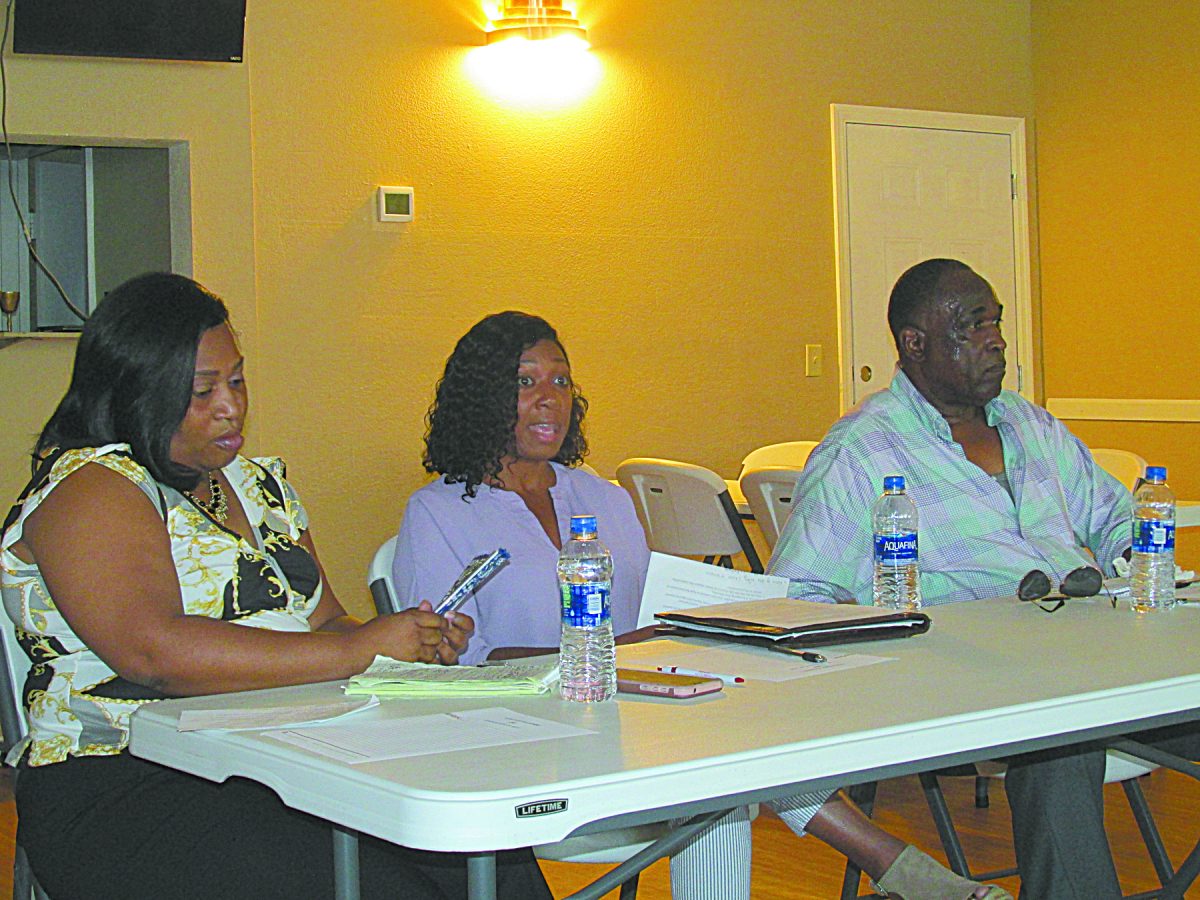 An Organizing for Grady County event gave local voters an opportunity to meet three political newcomers running for seats on the Cairo City Council and two incumbent councilmen Tuesday. Approximately 50 people turned out for the informational forum, which was held at Reflections Event Center on First Avenue. New candidates were District 1 candidate Alicia Byrden-Gurley, District 3 candidate Timia Brown and District 5 candidate Emory Thomas Sr. Ann Williams, also a new political candidate who has qualified to run for District 1, was not in attendance.

Thomas introduced himself as a private investigator and day trader who contends that information is not relayed to the community about city government. He also questioned the cost of utilities and trash services for Cairo residents, where tax money is going and why SPLOSTs are so important. He said the council needs “new blood, new thoughts.” Thomas claimed Cairo is a follower and needs to be a leader.
Brown, a Registered Nurse and nursing home administrator, says if elected she would help “find answers to problems and amplify our victories.” She said council members should develop relationships with one another. “It first starts with the city council being of one accord,” Brown said. “You have to get along, one person can’t do it alone.” Brown said she has the listening and critical thinking skills needed for a council member. She said change is good, “We have to put in some work to make things change.” Brown also said the council should support local businesses to help foster job creation.
Gurley, a CEO of an assisted living facility in Albany with a background in social work, said she is a resourceful advocate unafraid of asking questions. “If I’m a part of the council, I will be a part of the solution,” she said. Gurley said she is concerned about overgrown ditches in the city and the danger they pose to young children. “I feel strongly it’s time for a change. My children have grown, and I’ve seen little change here,” Gurley said. She said local employers, including government, should offer better benefits packages so residents can afford to work in Cairo.
Each candidate wrapped up his or her time by asking for votes.
The last 30 minutes of the hour-long meeting featured two incumbent city councilmen, Lannis Thornton of District 1, and James H. (Jimmy) Douglas of District 4.
Erica Hunter of Organizing for Grady County, which she announced is a 501(c)(3) nonprofit organization, said all of the council members had been invited to Tuesday’s meeting, but because of Sunshine Laws, only two could attend at a time without properly advertising the gathering as a public meeting. Incumbent city councilmen had suggested the forum be scheduled on the same night as a city council meeting since one of the groups goals is to better educate citizens on how city government works. This would have allowed for all members of the city council to participate and adhere to state law.
Thornton, who has two challengers in Byrden-Gurley and Williams, encouraged the audience to look at his track record on the council. He said every road in District 1 has been or will soon be repaved and potholes are being repaired as quickly as possible. In his 16th year on the council, Thornton said he is most proud of the work to end flooding around Sixth Avenue N.W. “We used to couldn’t go to school because of flooding,” the councilman said. He said elevating the road and installing pipes had eliminated that problem. He also pointed to the success of obtaining a grant to improve Copeland Avenue. More drainage work, curb and gutter installation and ditch maintenance takes time and money, but are being done, he said. Thornton said he has a good relationship with the other council members. “You’ve got to get along to get something done in your district,” Thornton said. He said the city helps fund the Grady County Joint Development Authority, which works to attract businesses and jobs here. He asked for the votes and support of those in attendance, saying, “I know what we need to keep District 1 moving. I am a dedicated public servant and hard worker, not a talker.” He encouraged people with concerns to sign up to speak at city council meetings, which take place on the second and fourth Mondays of each month. People who want to speak in a council meeting should register with the city by lunch Thursday to be placed on the next meeting’s agenda, he said.
Douglas, who is not up for reelection this year, said he has served on the council since 2006, and pointed to the $8.8 million improvement to the city’s water treatment facilities, which is still in process, and the current construction of a new police headquarters as proud achievements for the entire city. Douglas said he is well qualified with a commitment to serve. With downtown’s improved streetscape, Douglas hopes more businesses will move into the area. He said the city manager has helped the Joint Development Authority to make sure the city makes the process of locating here easy for new businesses.
When an audience questioner asked if people will be compensated for fees they paid for any overdue utility bills in the past, Douglas replied, “I don’t think the city is in violation of any ordinance.” He said the city’s attorney is expected to provide his opinion on the matter at an upcoming council meeting. Some people have questioned the legitimacy of the fees, since the practice of fee collection was in conflict with wording of the city’s ordinances. The ordinance was revised last September to align it with the long-standing practice and the terms included on the monthly utility bills..
Event moderator Erica Hunter told the audience, “I hope you take something away with you to help you make an informed decision. . . .this is about uplifting and educating our community.” Hunter also said anyone who needed could register to vote that night or up until Oct. 7 to be able to participate in the Nov. 5 election.
Posted in News