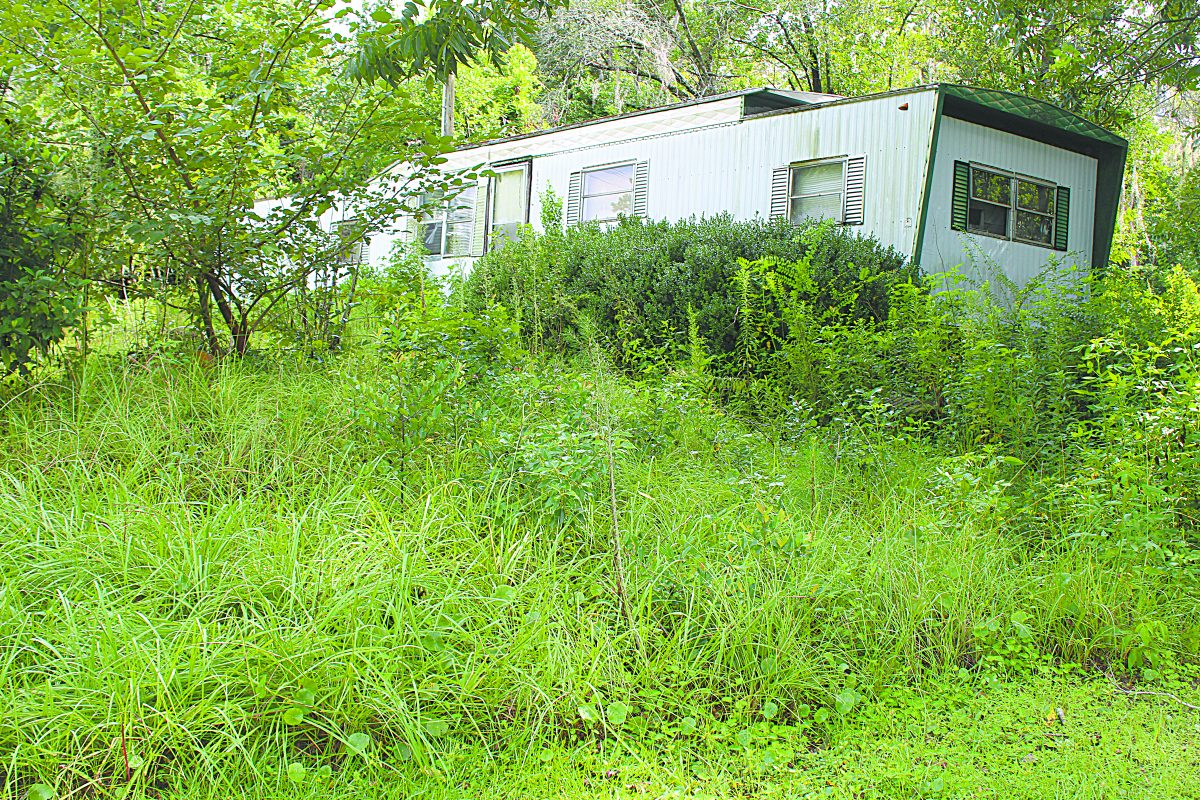 THE CITY OF CAIRO is seeking to clamp down on elminating blight within the corporate limits of Cairo and enacting tougher standards on older model mobile homes. This mobile home, located at 622 Fourth Street N.W, is owned by Private Mortgage Group, LLC, Richard Jordan-registered agent.

The Cairo City Council wants to empower the city manager to be able to abate nuisances and eliminate blight inside the corporate limits faster than the current ordinance allows, but after receiving the proposed revised ordinance from the city attorney Monday night, there is more work to be done.
City attorney Thomas L. Lehman proposed adding a new section to the ordinance dealing with the removal of nuisance vegetation. “It is accelerated as to time. The procedures are the same, but I’ve accelerated it for time,” Lehman said.
However, city manager Chris Addleton recommended that in addition to vegetation to keep junk material and junk cars in the same section. Addleton said it was his desire to accelerate the time on those issues, as well.
The city manager also suggested that he and building official Brian Hayes meet with Lehman to go over the proposed revisions to address questions and concerns Hayes had expressed.
“Brian has some concerns and I do, too. My concern is speeding up the process and doing it legally and efficiently. Not to make it so hard that code enforcement has a problem,” Councilman James H. (Jimmy) Douglas said.
Councilman Jerry Cox questioned the requirement that a request be filed by a public official or by at least three residents of the city to initiate an abatement.
Lehman explained that he did not want a neighborhood feud turning into a city feud. “I just wanted an independent person to get the ball rolling and not one private citizen upset with the neighbor,” he said.
Addleton explained that on Monday he got a call from a neighbor and he went and looked at it and he reported it to the building official to initiate the abatement process. “That’s how it would work,” the city manager said or three residents could make a request to the city manager and the process would be initiated.
Councilman Douglas also asked about Lehman writing into the ordinance that offenders had up to three years to pay off any lien the city issued against the property as part of the nuisance abatement. “If it’s over $3,000 maybe, but for anything less than that I think three years is too long,” Douglas said.
Lehman agreed and said he did not have a concern with revising the language accordingly.
Councilman Douglas also urged the council to consider revising the city’s mobile home ordinance regarding mobile homes that are 10 years old or older in the corporate limits.
Using as an example a mobile home located at 622 Fourth St. N.W., owned by Private Mortgage Group, LLC, whose registered agent is Richard Jordan, Douglas said that the ordinance required mobiles homes of that vintage or older to be inspected prior to being set up in the city limits, but there is no provision for future inspections to insure the mobile home continues to meet all codes.
The city has initiated nuisance abatement against Jordan and Private Mortgage Group, LLC for the condition of the mobile home and unkempt yard. Councilman Douglas said he would like to see the city ordinance revised to allow for inspections of the trailer and similar mobile homes throughout the city to make sure they all meet code.
“Two weeks ago, the front door was wide open and no telling how long it has been that way,” Douglas said.
Councilman Douglas said that the same owner owns many more mobile homes in the city and he would like to see the building official be able to do annual inspections on mobile homes to insure codes are met.
City manager Chris Addleton said that whenever there is a change in utility accounts the building department conducts safety inspections prior to the utilities being reconnected, but not code inspections.
Douglas said he believed it was necessary to do more and commented, “it’s food for thought.”
In other business Monday night, the council:
Heard a report on the Regional Community Center board of directors which manages the operations of the Grady Cultural Center and the Zebulon Theater by the board’s chairwoman Lequita LeGette. Mrs. LeGette reported that painting of the interior of the cultural center was now underway and that the floors were being refurbished. Upgrades to the bathrooms had also been approved and would be made shortly. She also reported that project would soon begin to lower the ceiling in the Zebulon. She said the board operated under the philosophy of “pay as you go” and that projects were not undertaken until there was money in the bank to pay for them. The board chairman also credited the work of Robert Dykes who serves as the manager and booking agent for the cultural center and theater.
Heard a request from Councilman Bobby Gwaltney for city crews to address large potholes on Brookwood Drive S.E. and 14th Avenue S.E. He also reported that a constituent had requested he bring up the possibility of live streaming council meetings and he asked the city manager to research the potential cost. Councilman Demario Byrden agreed it was something the council should consider and Mayor Booker Gainor said that the City of Thomasville offers it as a link on the city’s website.
Heard a suggestion from the mayor about the possibility of the council being provided screens or tablets that the agenda and packet could be provided electronically and reduce staff time in preparing packets and the cost of copying the hundreds of pages of documents.
Heard a recommendation from the mayor that the city and county commission jointly participate in a poverty workshop. The mayor recently participated in one facilitated by Grady County School System assistant superintendent Janet Walden. Mayor Gainor said with the community’s large population of low income residents the workshop would be beneficial to city and county leaders. None of the other councilmen offered comment and the city manager said he would need further direction before calling for a joint session with county leaders.
Posted in News