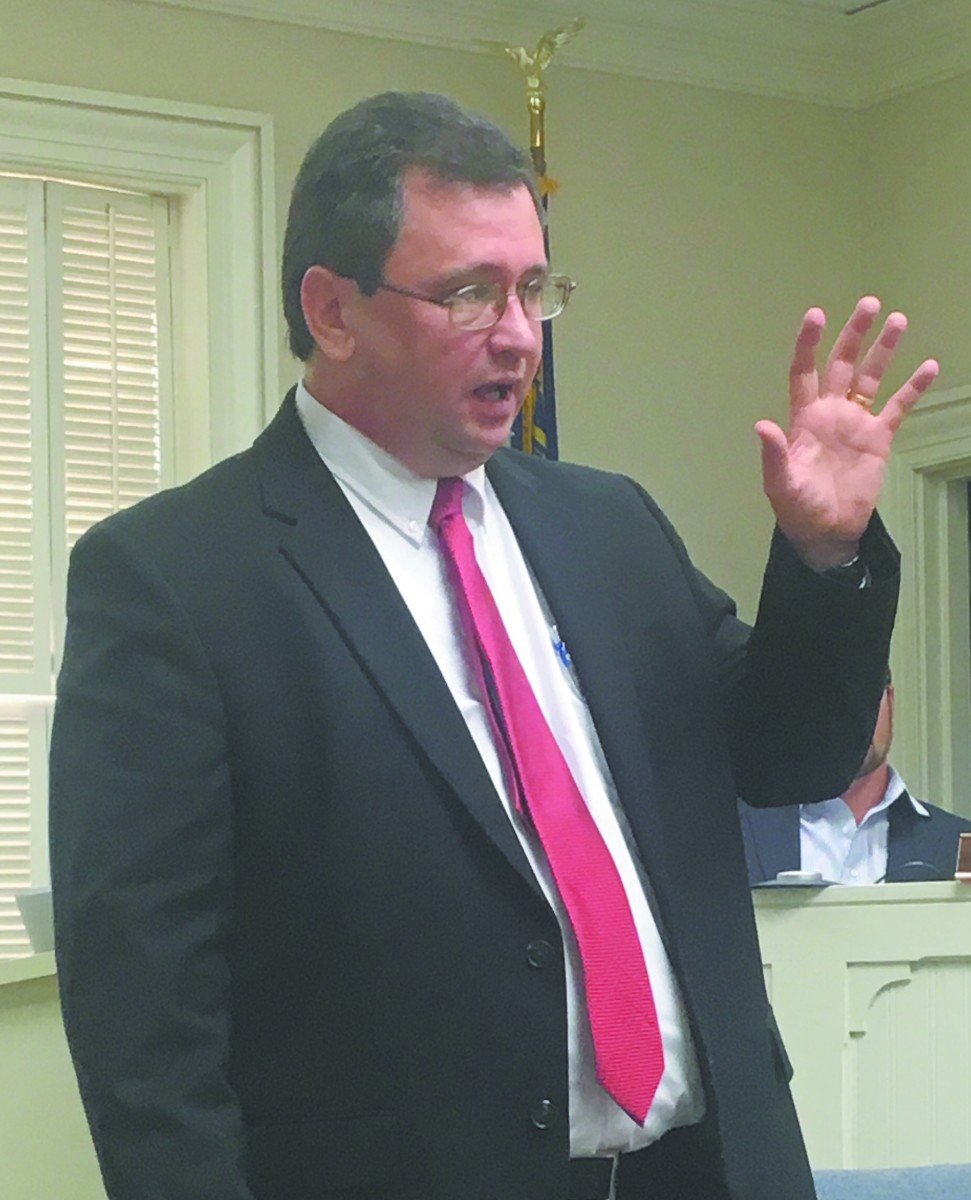 GRADY COUNTY’S AUDITOR Perry Henry makes a point during his presentation of the audited financial statements for the 2018 on Tuesday night.

Grady County’s auditor expressed his optimism that the county is on the right track to putting its financial house in order.

“Considering the personnel changes you had last year and the hurricane, you’ve cleared up a good bit. A bunch of issues have been cleared out,” Auditor Perry Henry reported to the county commission Tuesday night.
Henry issued a “clean” opinion of the county’s finances as of Dec. 31, 2018, but he warned that his audit is not a “full fledged guarantee” that everything is in order. “There may be something we didn’t find or something could be overlooked,” Henry said.
A few lingering findings remain, but the auditor said he is hopeful they can be cleared up completely prior to the audit of the year ended Dec. 31, 2019.
A finding related to inadequate separation of duties is unlikely to ever be resolved due to the number of the county staff and limited resources.
Findings that can be resolved include failure to adopt budgets for some special revenue funds and exceeding appropriations in some departments of county government.
Another finding Henry said he wants to see resolved is the untimely reconciliation of the bank statement for Grady County Emergency Medical Service.
The county’s auditor stressed the importance of bank statements being reconciled each month. “When you let things slide it compounds the problem,” he said. According to Henry, banks do make mistakes and without timely reconciliation those errors are not identified.
The one new finding in the 2018 audit was for “unusual and very questionable activity” discovered with the payroll withholdings of a single county employee. According to county officials this finding relates to misappropriation of funds by former county clerk Carrie Croy.
Henry did not elaborate Tuesday night and he noted that the matter had not been resolved and he did not wish to comment further at this time.
The auditor noted that in prior years the county faced substantial fines and penalties from the Internal Revenue Service, but he said that those had all been cleared up and that the penalties and interest had been waived.
In his report to the board Tuesday night, the auditor noted that the county’s cash had decreased by $565,606 from 2017 to 2018. “If it keeps sliding backwards you can get yourself in a spot,” he warned.
Henry said that Hurricane Michael had played a major role in the county’s finances in 2018. He pointed out that expenditures for public safety and public works had increased by 13 percent compared to the previous fiscal year while general government expenses grew by only 1.3 percent.
The auditor said that 2019 should prove to be a better year for the county financially.
“This is a good report. A whole lot better than last year,” Commission Chairwoman LaFaye Copeland said.
“We’ve come a long way and with all new personnel,” Commissioner Ray Prince added.
Grady County Administrator J.C. (Buddy) Johnson III, thanked his administrative team consisting of Holly Murkerson, Mary Griffin and John White for “working their tails off” and tackling problems facing county government. “I want to publicly thank them. There’s more work to do,” Johnson said.
The county administrator was equally complimentary of Henry, whose own home was severely damaged in last year’s hurricane, as well as his accounting office. According to Johnson, Henry had an extension through September to complete the audit, but he said Henry was determined to finish it by the end of June.
Posted in News