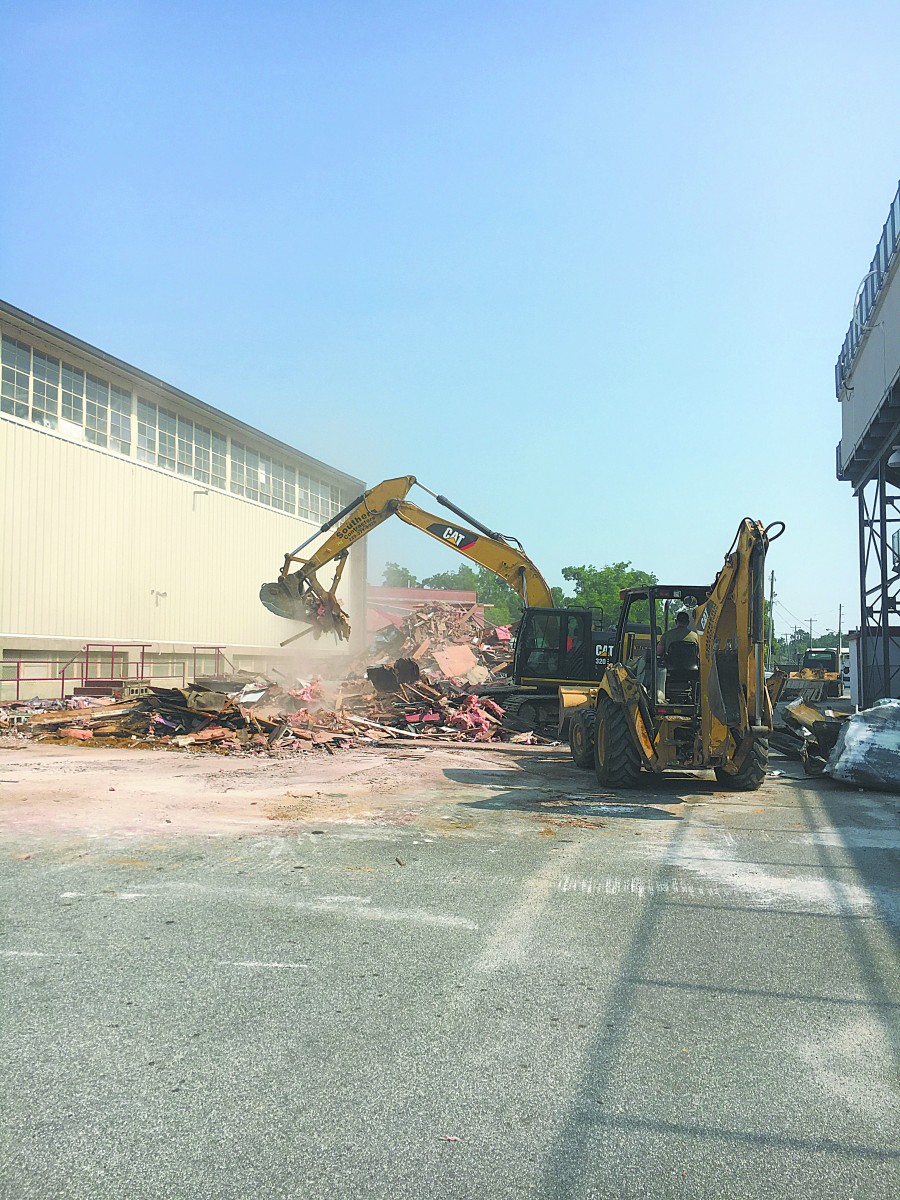 THIS MOBILE UNIT that was bricked up and located east of the former Cairo High School gymnasium was razed this week by Southern Contractors of Cairo.

With Grady County Schools closed for the summer break, construction work and other facilities projects are now underway at various schools.

On Monday, crews with Southern Contractors were on the Cairo High School campus razing a structure east of the former CHS gym. The building formerly housed a classroom and once was used as a weight room.
According to school system officials, the structure was an old mobile unit that later was bricked up. The structure is no longer needed and its removal will free up additional space between the old gym and West Thomas stadium.
Crews moved on to Whigham on Tuesday where demolition work is underway to clear a path for a construction project to begin shortly. Plans call for an enclosed hallway leading from the school’s main building to the auditorium.
Work will also be done this summer to replace the bathroom facilities on the elementary and middle school wings of Whigham School. Also, a bathroom will be installed in the Special Education classroom.
Work is also going on this summer at Southside Elementary School. GFA Design Build is the contractor on completing the Southside auditorium project which includes the addition of wings to the facility that were in the original plans, but could not be constructed until the old classroom wings were razed.
Grady County School Superintendent Dr. Kermit Gilliard reported this week that work is getting underway on the installation of 309 new video cameras at all seven schools. This work is part of the $14.5 million contract with ABM Building Solutions LLC the board approved earlier this year.
Through the ABM contract, all lighting in county school facilities will be upgraded to LED, which is more energy efficient and the bulbs last 10 years.
New plumbing fixtures that conserve water will be installed along with pedal valves in school cafeteria kitchens to reduce the cost of heating water.
School facilities will be weather-proofed to eliminate wasted heating and cooling of buildings and to make the facilities better insulated.
ABM and Grady County School System officials have identified humidity as an issue in school buildings.
Also included in the scope of the project is central energy management controls that provide for remote access and monitoring of lights and HVAC systems. The new control system will also alert school food service personnel if equipment fails to maintain required food temperatures.
Dyson hand dryers will be installed in all schools, greatly reducing the need for paper towels, trash bags and plumbing issues caused by paper towels flushed down toilets.
A lightning alert system will also be put in at Cairo High School as part of the overall project and a transformer upgrade at Washington Middle School will take place.
Through a “Guaranteed Energy Savings Contract” with ABM, the school system is looking to replace nearly 60 percent of the school system’s HVAC units, or 408 of 746 that have passed their useful life and are in need of replacement.
According to Grady County School System officials, all HVAC units 2006 and older will be replaced. The cost of the replacement of HVAC units, alone, is nearly $6 million.
According to Dr. Gilliard, if there is work that is not completed by the time school reopens, ABM personnel will work after school hours and at night to wrap up the project without interfering with the instructional day. The complete project is scheduled to be finished by May 2020.
A combination of general fund dollars and Education Special Purpose Local Option Sales Tax proceeds are being used to finance the projects in addition to financing through the ABM contract.
The system is financing up to $14,594,240 over a 20-year term through ABM and the debt will be paid by the guaranteed savings from reduced energy and operational costs, plus $125,000 annually from the Education Special Purpose Local Option Sales Tax. After five years, the board could elect to pay the debt in full and reduce its interest expense.
Posted in News