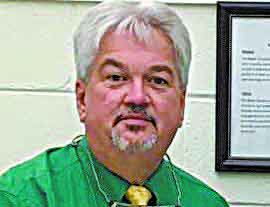 After meeting nearly an hour behind closed doors Tuesday night, the Grady County Board of Education voted 4-1 to accept the personnel recommendations of School Superintendent Dr. Kermit Gilliard.

The lone vote of opposition was cast by veteran board member Teresa Gee Hardy.
Hardy commented after the meeting, “While I do not support all of the transfers recommended by the superintendent, as a board member I will support them.”
Included in personnel recommendations put forward by the superintendent is making a change at the top of the school administration of Washington Middle School.
Effective immediately, Derrick McCoy is being transferred to the central office as the administrative assistant to the superintendent. Former Grady County educator Michael Best, who for the past two years has served as the principal of the Baker County K-12 School in Newton, has been hired as the new WMS principal.
“Mr. McCoy’s tech savviness is needed systemwide. He has experiences and knowledge that will benefit our entire system. Mr. Best’s recent K-12 experience in Baker County make him the best candidate to take on the challenges that a middle school exhibit,” Dr. Gilliard said.
For the remainder of the school year, associate principals Natalie Hudson and Justin Amaro will be in charge of the day-to-day operations of WMS. According to the superintendent, he, and assistant school superintendents Janet Walden and Tilda Brimm, who is a former WMS principal, will assist as needed.
Dr. Gilliard said he is hopeful that principal Best will be able to report to work following the conclusion of the current school term.
“Mr. Best is highly involved in the Grady County community and knows many of the WMS students and their families as well as the faculty and staff. I predict it will not take long for him to prove that he is more than ‘the voice of the Syrupmakers.’ He began his career as a WMS Tiger and is excited to return to WMS and the Grady County School System,” Dr. Gilliard said.
McCoy has served as the WMS principal since last October. A native of Richland, Ga., but most recently a resident of Salisbury, North Carolina, McCoy had served as the principal of West Rowan Middle School since 2015. At the school of 650 students, he served as the chief academic officer. Prior to going to West Rowan, McCoy was the principal of Spring Lake Middle School for three years.
Best, a 21-year veteran of the Grady County School System, left Grady County in June 2017 to go to work in Baker County.
Best, who began his career in public education with the Grady County School System as a classroom teacher at Washington Middle School in August 1995, served as an assistant principal at Cairo High School and as the virtual school director for Grady County Schools.
With the pending retirement of Whigham Elementary School principal Mark Willis at the end of this school year, Dr. Gilliard has recommended Whigham assistant principal Zack Wilson as the school’s new principal.
Wilson was hired as a teacher at Whigham in July 2003 and taught there one year before transferring to Washington where he taught for 11 years. For school terms 2015-2016 and 2016-2017 he served as an assistant principal at Washington. For the last two school years, Wilson was worked at Whigham as assistant principal.
“Mr. Wilson has proven that he has the leadership skills to become the next principal at Whigham. I look forward to working with him and seeing him and his staff continue to move the school to the next level,” Dr. Gilliard said Tuesday night.
The superintendent traditionally has announced personnel changes or transfers in the spring. “With all of my recommendations, I want to put the best people we have in the jobs they can succeed in and can ultimately improve the educational opportunities of all of our students,” Dr. Gilliard said.
In other action Tuesday night, the board:
Approved the following transfers: Austin Harrell – Social Studies teacher from Washington Middle School to Whigham Elementary School; Lynn Branch – ELA teacher at WMS to ESOL teacher at Eastside and Whigham elementary schools; Clifford Jackson – custodian at Cairo High School to WMS; Terry Willis – custodian from WMS to Northside Elementary School; Dr. Gloria Fuller from assistant principal at CHS to Director of the Virtual School program; Crystal Holt from guidance counselor at CHS to Director of Mental Health Services; and Brittany DePlato from guidance counselor at Whigham to guidance counselor at CHS.
Approved the hiring of the following: Casey Usery – PreK-5 teacher at Eastside Elementary School; Sharon Daughtry – parapro at Shiver Elementary School; Amy Staff – business ed teacher at Cairo High School; and Christina Murphy – PreK-5 teacher at Eastside.
Accepted the resignations of the following: Yolanda Cornell – school food assistant at Washington Middle School; Brenda Jones – PreK teacher at Southside Elementary School; Austin Watson – teacher at WMS; Paul Coleman – teacher at WMS; Dawn Jackson – teacher at Whigham; Jacqueline Ruay – Spanish teacher at Cairo High School; and Sarah Davenport – parapro at Northside.
Approved the retirement of Debbie Childs – media specialist at Cairo High School and Mark Willis – principal of Whigham Elementary School.
Posted in News