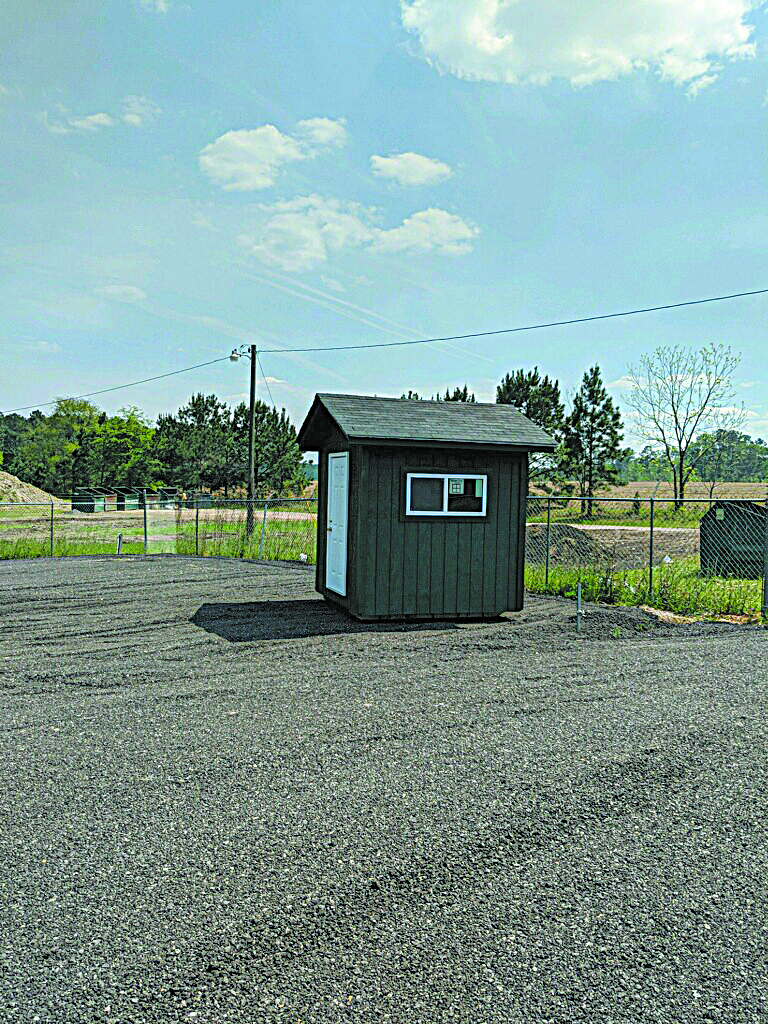 THE ATTENDANT station at the Beck Branch dump site was constructed by construction class students from Cairo High School.

The new manned garbage site on Beck Branch Road will open for business next week, according to Grady County officials.
The new attendant station, built by Cairo High School construction class students, has been delivered and put in place at the dumpster site in southern Grady County.
Grady County Road Superintendent and Solid Waste Director Stanley Elkins says that he is working with Grady EMC to get power to the location, then the attendant station will be wired and the electric service connected.
A well on the property has been reactivated and is supplying water. The county will lease a port-a-potty for use by the three attendants who will be manning the location.
Elkins said Tuesday he is finalizing the hiring of the attendants for the Beck Branch site and should be finished by this Friday.
A third manned site will be created at an existing dumpster site just south of the road department headquarters on North Broad Street near the former Grady County jail.
Elkins says that site will be opened in mid to late May.
The Grady County Commission has decided to eventually eliminate the 35 dumpster sites spread across the county and consolidate to a manageable number of manned dumpster sites similar to an existing manned site on 20th Street S.E.
The manned sites will be open from 7 a.m. until 7 p.m. Monday – Saturday and from 1 p.m. until 6 p.m. on Sunday.
On Tuesday morning, Grady County Administrator J.C. (Buddy) Johnson III, reported that the county may soon have to invest in a rubber tire backhoe and a garbage truck, neither of which are inexpensive.
According to the administrator, rather than having the knuckle boom working on road projects, the county is having to use it to clean up its unmanned garbage sites. The current unit is 16 years old and would cost $135,000 to replace.
“We are also going to have to consider our options or look at $260,000 for a new garbage truck,” Johnson said Tuesday.
Once the county has its initial three manned sites operational, Johnson told commissioners he would like to discuss soliciting proposals from private contractors to handle the county’s solid waste collection and disposal.
The county has batted around the idea for some time, but Johnson indicated he was prepared to make a recommendation to privatize the service.
He said that after talking with Cairo City Manager Chris Addleton, he is convinced the county’s best option would be to privatize the service. The administrator predicted it would be a big savings to the county over the long haul.
In other business Tuesday, the board:
Heard a report from Johnson and Commissioner Keith Moye about Engine 63, the Class A pumper based at the Pine Park Volunteer Fire Station. It failed a pump test last week. According to Moye, the transmission, which not only propels the truck, but also operates the pumps to pump water, overheated. Both Moye and Johnson said the truck would need to be replaced due to its age and the cost of repairing it. Moye noted the truck is still functional but the pumper could fail at any time. Johnson has authorized Chief Richard Phillips to investigate options for replacement including military surplus vehicles. He will bring forward a recommendation at a future meeting.
Posted in News