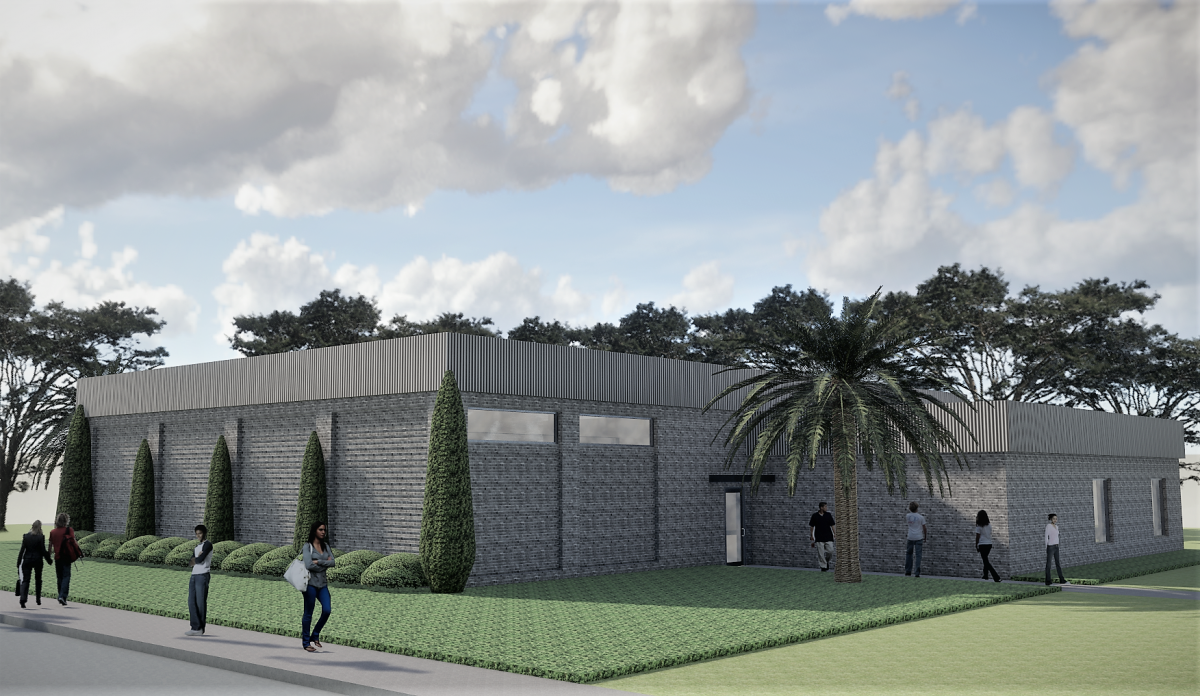 A PROPOSED NEW home for the Navy JROTC program at Cairo High School is just one of the facilities projects the Grady County Board of Education has on the drawing board. School officials say they depend on sales tax proceeds from the Education Special Purpose Local Option Sales Tax and state funding to construct, upgrade and maintain school facilities.  Architectural rendering courtesy of JW Buckley & Associates.

A small percentage of the county’s registered voters came out to vote in Tuesday’s special election, but nearly 80 percent of those who did favored passage of the Education Special Purpose Local Option Sales Tax.
The ESPLOST referendum passed with 691 yes votes to only 173 no votes, just over 20 percent of the votes cast.
Not surprisingly, the precinct with the largest turnout in the ESPLOST referendum was Cairo District 5 where voters were also electing a new county commissioner. District 5 voters favored the sales tax for schools by a margin of 222 to 66.
The voters in Higdon and Spence were more closely divided on the issue. In Higdon, which is the Calvary area, the yes votes were 32 and the no votes totaled 17 and in Spence 24 voted yes while 12 voted no.
“First and foremost, I would like to thank all of those who turned out to vote to renew the sales tax. It is not only important to our school system, but it will benefit our dedicated faculty and staff in addition to providing a better educational environment for our students,” Grady County Board of Education Chairman Jeff Worsham said Tuesday night.
He also stated, “The Board of Education, School Superintendent and Central Office personnel are committed to doing what is right for our students and we will continue to spend the money wisely as we have tried to do in the past. We appreciate the voters’ confidence in what we are trying to do as a school system.”
Grady County School Superintendent Dr. Kermit Gilliard also expressed his appreciation to the voters Tuesday night.
“The voters of our community have once again shown that our public schools are a priority. Through their support and with the funds this sales tax has the potential to generate over the next five years, we will be able to invest in our facilities and make upgrades we would not otherwise be able to afford. Our Board of Education has been wise stewards of public funds and by having the ESPLOST we have been able to keep school taxes relatively low and the millage rate level for the past several years. Thank you, voters of Grady County, for your continued support,” Dr. Gilliard said.
The superintendent announced Tuesday night that the board of education will have a called meeting next Tuesday to discuss projects and hopefully take action to begin work on projects to be funded through the ESPLOST and a combination of state and local funding.
The ESPLOST will not add to the local sales tax rate, but will provide for a seamless collection of sales tax when the current ESPLOST expires.
A number of extensive projects is on the drawing board including two major ones at Eastside Elementary School and Whigham Elementary School.
Between $4 and $5 million is expected to be spent for improvements to Eastside Elementary School including construction of a new cafeteria and kitchen as well as new administrative offices, classrooms and media center. The local system is eligible for approximately $3 million in state funds for the project and the remainder would be from the newly approved sales tax.
In addition to other projects at all of the county’s schools, athletic facility needs are also being contemplated and could be financed with ESPLOST funding.
Officials say a renovation of Whigham Elementary School will get underway this summer.
Some of the other projects proposed include a cafeteria and kitchen expansion at Southside Elementary School; refurbished restrooms and new walkway covers at Washington Middle School; a new track complex at Cairo High School; new restrooms to replace those at West Thomas stadium; upgrades to the Jackie Robinson Field and baseball facilities at CHS; new restrooms to replace existing facilities at the CHS auditorium in addition to new flooring, paint, new seating and upgrades to the lighting and sound system; new NJROTC building at CHS; and more.
If necessary, the sales tax could also be used for new technology and the purchase of school buses.
In voting to support the ESPLOST, local voters also authorized the Board of Education to issue up to $7 million in general obligation bonds to fast track construction of priority projects. The bonds would be paid off through proceeds of the sales tax over the next five years.
Posted in News