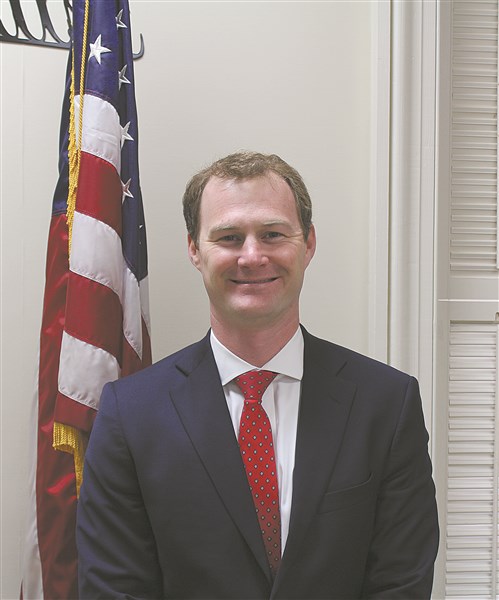 A local attorney is once again representing the Grady County Board of Commissioners.
On Tuesday morning, the board voted 3-0 to appoint Gabe Ridley as the county attorney for 2019. Commissioner Keith Moye abstained from voting citing a conflict of interest created by a relative working as an employee of Ridley’s law firm. The District 5 commission seat is currently vacant following the recent resignation of T.D. David.
Newly elected Grady County Commission Chairman LaFaye Copeland, who had previously stated publicly her vote would be to rehire former attorney Kevin S. Cauley, voted with commissioners Ray Prince and June Knight to retain Ridley on the recommendation of County Administrator J.C. (Buddy) Johnson III.
The motion to appoint Ridley was made by Prince and his motion was seconded by Knight.
“We don’t like doing business without a full board, but this is in a way an emergency and we had to go ahead and get an attorney in place. It’s good to have a local attorney again,” Chairman Copeland commented.
Prince, Knight and Copeland were the majority votes in December 2017 to not reappoint Cauley, a veteran of nearly two decades of service, and to retain Hall Booth Smith, which proved to be a costly decision. The county has yet to receive the final quarterly billing from the law firm, but through the September billing the county’s legal expenses had more than doubled with the county having spent $97,707.
According to the county administrator, Ridley is guaranteed a 10-hour monthly retainer at a rate of $174 per hour. Any work over and above the 10-hour minimum will be billed at $174 per hour.
During Tuesday’s meeting, Chairman Copeland requested Ridley stand and she commented, “I haven’t had the chance to meet you, yet.”
Ridley thanked the board for the appointment. “I appreciate the opportunity to serve and I am looking forward to working with all of you and getting to know everyone better.”
Ridley, son of Mary Faye and Jerry Ridley of Cairo, is a Cairo native. He attended Cairo High School and played basketball under his father and coach Isaiah Chance.
Following graduation from high school in 1999, Ridley attended Huntingdon College in Montgomery, Ala., where he played basketball and graduated with a biology degree in 2004. In 2006, he earned his masters degree in environmental engineering from the University of Alabama at Birmingham.
Ridley then joined the U.S. Army, where he was commissioned as an infantry officer and earned the coveted Airborne and Ranger qualifications. He deployed to Iraq in 2009 with the First Calvary Division for a 12-month tour, serving as battalion staff officer and platoon leader.
In 2010, Ridley completed his active duty service and began working for Omnova Solutions as an environmental engineer. He managed the environmental program at Omnova Solution’s Calhoun, Ga. chemical plant for two years.
During that time, the new Cairo attorney served in the Georgia Army National Guard as a captain.
Then in 2012, Ridley decided to change careers and enrolled in Georgia State University College of Law and graduated with honors in June 2015.
Ridley returned to Grady County in July 2015 to begin work with attorney Thomas L. Lehman. The new county attorney branched out on his own in September 2018 and opened The Ridley Law Firm, which is located in the renovated former bus station at 401 North Broad St.
Ridley, 37, and his wife Laura are the parents of three children, Luke, 8, Noah, 6, and Abigail, 3.
Dr. Laura Ridley is a dentist who practices with Dental Associates of Southwest Georgia in Cairo and with Dynamic Mobile Dentistry based out of Macon, which is a traveling dental service that visits nursing homes.
“I’m excited to come on board and assist the county in any way possible. I have a really good impression of our new county administrator and I believe our county is headed in a positive direction,” Ridley said.
According to administrator Johnson, one of the first orders of business Ridley will be requested to complete is condemnation proceedings for six tracts related to the Johnson Road Community Development Block Grant project, which was work Hall Booth Smith had been requested to complete but did not.
In other annual reorganization, the board voted unanimously to elect LaFaye Copeland chairman for 2019 and Keith Moye vice chairman.
Chairman Copeland pledged for 2019 to be “one of the best years ever” and said the board would operate in complete transparency.
“We are here to do the goodness of the county, not based on our personal agendas, but based on the community. Under my leadership we will make that happen,” Chairman Copeland said.
The board unanimously approved new Human Resources Director John White as county clerk.
Commissioner Knight agreed to be appointed the county’s representative to the board of the Southwest Georgia Regional Commission.
Commissioner Prince said the board needed to discuss and make a decision at a future meeting about its representatives to the Decatur-Grady E911 committee following the resignation of Commissioner David, who along with Moye represented the board on the committee.
Posted in News