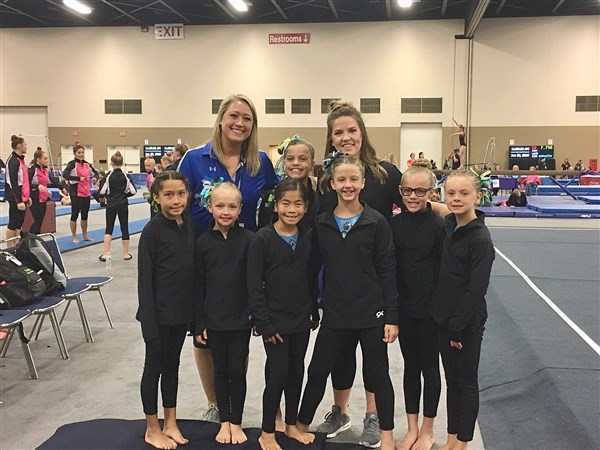 A pair of young Cairo gymnasts brought home medals from the recent YMCA National Gymnastics Championships. Jaden Addison and Meygan Mobley, both rising 5th graders at Shiver School, competed with the Thomasville Twisters from the Butler-Mason YMCA in Thomasville. Addison was the team’s top scorer for All Around, and brought home the most medals, four. Mobley and Addison also had the team’s highest All Around scores in their division. Nine other team members also competed.
“Coach Kristen (Morrison) and Coach Carson (Singletary) say that they are so proud of the way the girls competed and represented Georgia and how hard they worked! They had some tough competition, and their hard work paid off,” says Melissa Addison, Jaden Addison’s mother.
The Cairo gymnasts competed with 27 other girls in the Level 3 Junior Division.
Addison medaled at 8th place in the All Around competition with a total score of 36.275. She also earned medals in balance beam, floor exercise and vault. Her best score came on Floor Exercise, 9.2, which put her in 3rd place for the event. On the vault she came in 6th place with 9.125. She was 7th place on the balance beam with 9.275, and 13th place on uneven bars with 8.675.
Mobley came in 13th place in the All Around with a score of 35.375. She medaled in 9th place on balance beam with a score of 9.1. On floor exercise, she was 13th place with 8.825. She was 14th place on uneven bars with 8.65, and 17th place on vault with a score of 8.8.
All total, there were 450 Level 3 gymnasts in the Child, Junior and Senior Divisions. At the end of competition, Addison was ranked 73rd and Mobley was 160th.
The Nationals took place in Toledo, Ohio, June 27-30 with 2008 Olympic All Around Gold Medalist Nastia Liukin as the opening ceremonies speaker.
As teams were announced on opening night, they paraded across a central stage at Huntington Center then outside and down the street into the Fifth Third Field ballpark prior to a Toledo Mud Hens baseball game. After enjoying the baseball game, the gymnasts were treated to a dance party and fireworks. The Cairo gymnasts competed the next day.
The girls are back and already training for the fall season, which begins in September with a home meet in Thomasville.
Meygan is the daughter of Dwight Mobley and Stephanie Gonzalez of Cairo. Jaden is the daughter of Jarrett and Melissa Addison of Cairo.
Posted in News