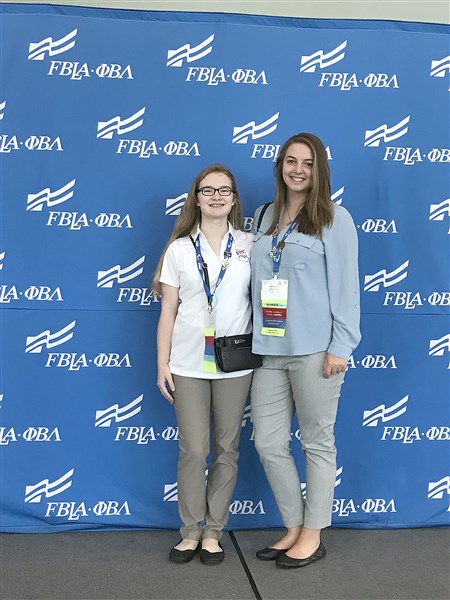 Cairo High School had two students represent the school at the FBLA National Leadership Convention in Baltimore last week, and one earned a third place national award. Rising junior Zoë Prince and rising senior Meredith Renaud from Cairo were among the “best and brightest” students from across the country, according to CHS FBLA co-advisor Cecilia Childree.
Prince competed in “Introduction to Business” and Renaud competed in “Journalism.”
Childree says, “The Awards of Excellence ceremony took place Sunday night, and Zoë reached the podium placing 3rd nationally. We are proud of these young ladies for representing us well.” In addition to a trophy, Prince won a cash prize from KPMG LLP.
To qualify for Nationals, students must earn a 1st through 5th place at the state leadership conference.
“In Baltimore, there were over 10,000 competitors from all over the nation and world, including participants from Puerto Rico, Canada, Haiti, and China who competed during the four-day conference. Only the top 10 students in each of the 70-plus categories were recognized on stage during the finals ceremony,” explains Robin Renaud who accompanied her daughter on the trip.
Renaud is the daughter of Robin and Charles Renaud. Prince is the daughter of Patsie and Jason Prince.
Childree says this conference helps prepare students for a business career as well as develop leadership skills. “While en route to Maryland, they enjoyed a day touring Washington, D.C.  They spent nearly a week preparing for their individual events, attending working sessions, enjoying keynote speakers, networking, as well as enjoying the attractions of Baltimore,” she says.
Two other CHS students, Ian Batey and John Sodrel, also qualified for Nationals, but were unable to attend. The event was held June 27-July 1.
Prince and Renaud said they wanted to thank the local FBLA chapter and Southern Insurance of Cairo for their financial support of the trip. Next year’s Nationals will be held in San Antonio, Texas.
Posted in News