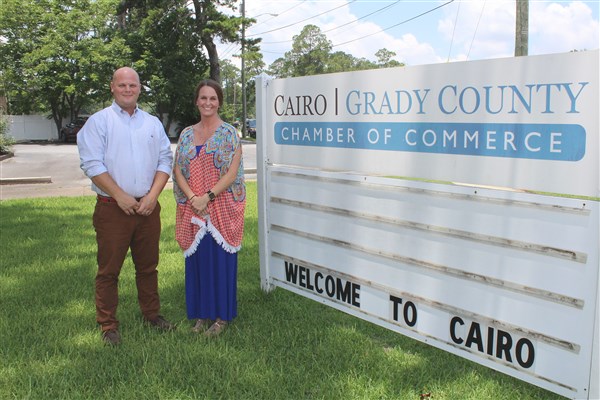 The Cairo-Grady County Chamber of Commerce Board of Directors has hired a new executive director and, after having female leadership for the past half century, the board has selected a man to fill the position.
David Trey Gainous was hired Friday as the new leader of the chamber, according to Chamber Chairman Candice Eubanks.
“I love this community and I’ve finally found a way to do what I’m passionate about, support my family and serve the community at the same time,” Gainous said Tuesday while discussing his appointment.
Gainous was elected to the Whigham City Council last fall and began his first term on Jan. 1. He said he plans to continue to serve in that official role as well as a member of the Whigham Community Council.
“I know I have a lot to learn about this job, but I’m really good with people. I want to create an environment where people will be asking me to join the chamber rather than me having to beg them to join,” Gainous said.
The new chamber executive director is a Grady County native and a 2001 graduate of Cairo High School.
Gainous has had several jobs since graduating from high school, but says he has gained valuable experience from each one. Currently, he serves as the maintenance director of Pinewood Nursing Center in Whigham, a job he has held since last August.
“I’ve done a little of everything and I’ve grown from each experience I’ve had,” Gainous says.
Before accepting the position with the local nursing home, Gainous spent six years on the road as an entertainer coach operator for JGM Coach of Wellsboro, Pa.
It was during his stint as a motor coach driver that Gainous rubbed shoulders with talents such as comedian Amy Schumer, actors such as William Shatner and artists like the Psychedelic Furs.
“When ‘Captain Kirk’ tells you you have his life in your hands, that’s something. It was pretty exciting,” Gainous said about transporting William Shatner of Star Trek fame.
Through his work with JGM coach, Gainous says he has traveled to all 48 states of the continental United States, as well as every populated province of Canada transporting entertainers to various tour stops.
“I tell you, the most scared I’ve ever been in my life was when I blocked the Lincoln Tunnel in New York City for about 10 minutes. Let’s just say southern hospitality doesn’t exist in New York City. Those folks were mad with me,” Gainous said. He explained that on his first assignment driving in New York City the height limits advertised due to snow pack indicated his bus was too tall to clear the tunnel, but it ended up there was plenty of clearance.
“I wanted to travel and this was a way to travel and get paid for it. I slept on the bus for the first year. You can’t have a family and do that kind of work. I was gone about 11 months of the year,” he said.
Gainous married the former Allie Kinnon, a banker with Capital City Bank, on Nov. 5, 2016, and the new chamber executive decided to find work close to home and get involved with the community.
“I want people to be proud of Grady County. Without people and the support of people, you don’t have a community. I want to be a positive ambassador for this community. As Dr. King said, darkness cannot defeat darkness, only light can. I want to help shine a positive light on our community. I’m a member of the next generation and it’s time for us to pull our weight and do our duty,” Gainous said.
Gainous is the son of David Cecil Gainous and Patricia Lynn Gainous of Grady County and Miriam Cook of Columbus, Ga. His wife is the daughter of Jeanie and the late Richard Kinnon. The couple and their two dogs reside at 104 Harrell Ave. N.E. in Whigham and are active in Whigham United Methodist Church.
Gainous will assume his new duties on July 9, 2018.
“I’m looking forward to working with (administrative assistant) Courtney (King). She does an outstanding job for the chamber and could have easily stepped up to this position, but she has four children and her top priority is being a good mom,” Gainous said.
“We are excited for Trey to begin work and we look forward to continued growth and success under his leadership,” Chamber Chairwoman Candice Eubanks said.
Mrs. Eubanks also acknowledged the service of Administrative Assistant King.
“Courtney has been working full time since Sara Heady resigned. She is a great asset to the chamber and we are very happy that she will continue her role at the chamber,” Mrs. Eubanks said.
The chamber has endured excessive turnover in the executive director position recently with the last two executive directors working two years or less. Jenny Law stepped down in February 2017 after just two years on the job and Sara Heady resigned June 8 just shy of one year on the job.