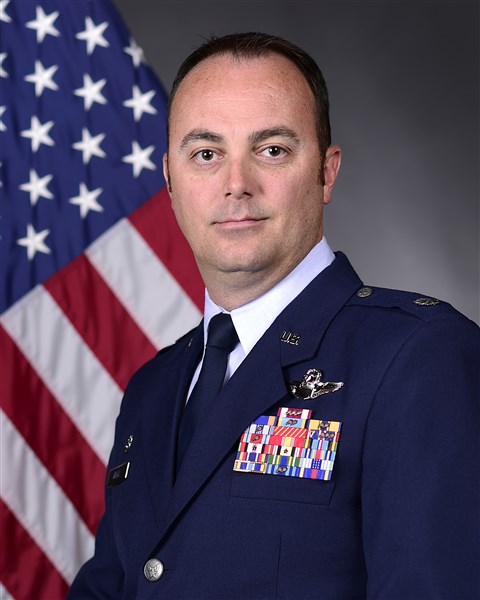 LT. COL. BRANDON KELLY is the new Commander of the 76th Fighter Squadron based at Moody Air Force Base. (photo courtesy Judie Kelly)

Born into a family where working for the public good is a way of life, Brandon M. Kelly says it was only natural that he’d choose a career in the military, especially when it includes his true passion, airplanes.
The 1994 graduate of Cairo High School is now a Lieutenant Colonel in the U.S. Air Force and was recently named Commander of the 76th Fighter Squadron based at Moody Air Force Base in Valdosta. “It’s good to get to do what I absolutely love, and it’s good for a Georgia boy to be able to get back home,” Kelly says.
After high school, Kelly attended the University of Georgia for one year, then transferred to Brigham Young University. After graduating with his bachelor’s degree, Kelly was commissioned into the Air Force through BYU’s AFROTC program in December 1998. Six years later, he was an A-10 instructor pilot and flight commander with the 25th Fighter Squadron based in Korea. He has continued to rise up through the ranks while maintaining his instructor status.
According to information from USAF, Kelly was “most recently Director of Operations for the 47th Fighter Squadron at Davis-Monthan AFB in Tucson, Ariz. . . .he was responsible for nearly 9,000 annual flying hours, 28 A-10C aircraft, 40 instructor pilots, and nearly 20 percent of Air Combat Command’s annual training and production of fighter pilots.”
His deployments have included Kuwait, Afghanistan and Iraq.
Kelly says he was 8 years old when his parents took him to see the Thunderbirds fly in a show at Warner Robins. He says he knew then that he wanted to be a pilot.
Kelly’s father, the late Jim Kelly, worked in law enforcement 25 years, ending his career in Cairo as chief of police. Brandon Kelly says with a father, brother and uncle in law enforcement, and his mother, Judie, working in social work, he was destined to work for the public. To ascend to the position of squadron commander, he says, is both humbling and exciting.
Kelly and his wife, Sherry, live in Lowndes County with their 5-year-old son, Dylan. Kelly’s daughters, Dakota and Dinae, remain in Tucson.
Posted in News