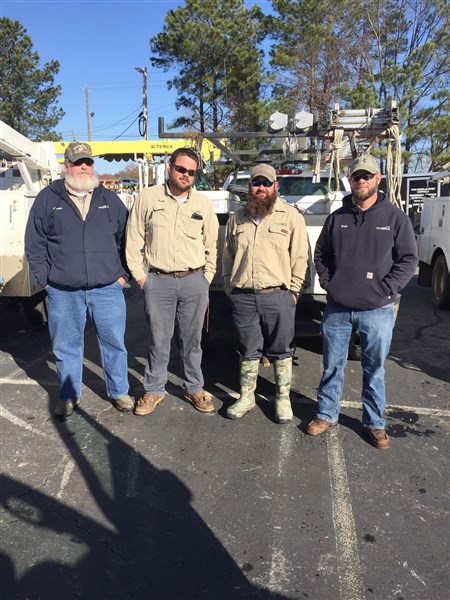 GRADY EMC personnel who recently were dispatched to north Georgia to assist in power restoration efforts following a strong pre-winter snow and ice event are, l-r, Neal Hester, Keith Phillips, Chad Morrell and Brad Love. The two, two-man crews were sent to assist Cobb EMC in restoring power to its 44,000 members who were left without power following a snow and ice storm earlier this month.

Four Grady EMC linemen were recently dispatched to lend aid to Cobb EMC in the midst of a rare pre-winter storm. The Georgia EMC safety coordinator, Andy Croft, contacted Grady EMC’s Operations manager John Long on Friday Dec. 8 in anticipation of needed assistance.
Grady EMC was able to assemble two, two-man teams who were dispatched early Saturday morning, Dec. 9, to assist in restoring power to the approximately 44,000 EMC members affected across Cobb, Cherokee, Bartow, Paulding and north Fulton counties.
Grady EMC President and General Manager Thomas A. (Bo) Rosser Jr., who gave the go-ahead to send aid, stated, “Whenever we are faced with storms, it’s a welcome relief to have help from a neighbor.  We have been on the receiving end of that help, but in this case, we’re happy to assist Cobb EMC and thankful for our outstanding employees and their dedication to help others in need.  We are thankful for their safe return and for Cobb’s full restoration.”
The initial number of poles reported broken on Dec. 9 continued to rise as more lines were pulled down by broken limbs. The weight of the ice caused more limbs to fall according to Cobb EMC’s “winter storm updates.” In addition to ice, reports confirmed upwards of 12 inches of snow fell over that weekend. Cobb EMC Chief Operating Officer David Johnson stated that it has been 20 years since the last winter storm of this severity.
Grady EMC Crew leader Keith Phillips commented on the professionalism of Cobb EMC. “Cobb EMC had a great facility and safety was the top priority.” When asked about the strain of leaving family, lineman Chad Morrell had unique insight, “I think about the families that
I’m helping. I appreciate the help of other EMCs when we have storms and how that helps my family, I am happy to return that favor.”
The other EMC personnel involved in the relief were Neal Hester and Brad Love.
Posted in News