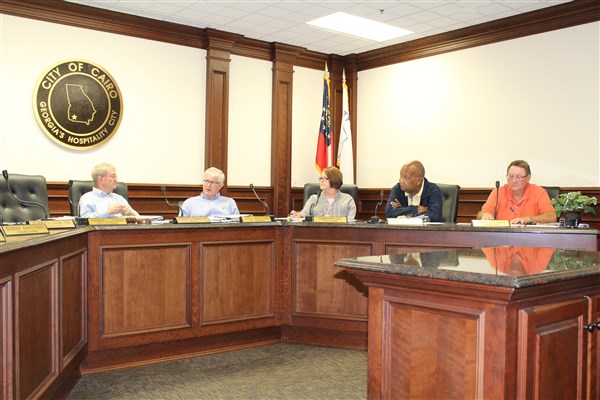 Although five architectural firms have expressed an interest in working with the City of Cairo on the design of its new police headquarters, the city council is days if not weeks away from selecting one.
The mayor and council met Monday night to discuss the police headquarters project with Cairo City Manager Chris Addleton and Police Chief Keith Sandefur.
The five firms that have shown an interest in being involved in the project include: Buckley & Associates of Albany; J. Glenn Gregory Architects of Valdosta; Jinright, Ryan & Lynn Architects of Thomasville; SRJ Architects of Albany; and WM2A Architects of Macon.
All five have worked on designs for at least one police headquarters facility, according to Addleton.
Members of the council, the city manager and police chief have personally inspected police headquarters in Moultrie, Sylvester, and Centerville, of of which were designed by one of the respective firms.
Buckley & Associates was involved in the design and construction of the Swainsboro Police Department headquarters and has been involved extensively in projects for the Grady County Board of Education, most recently the new College and Career Center at Cairo High School.
During Monday’s workshop, outgoing Councilman Ernest Cloud voiced his concern that the lot the city has purchased for the new police headquarters is not large enough.
“My personal opinion, the lot is too small, but we have to live with what we’ve got,” Cloud said. Cloud, who was defeated in his reelection bid on Nov. 7, stated he would prefer not to have to build a two-story facility.
Councilman James H. (Jimmy) Douglas said he did not think the city could avoid building a multistory facility in order to accommodate existing staffing and plan for future growth.
Earlier this year, the city assembled a tract of land eight-tenths of an acre in size at the intersection of Third Avenue N.W. and First Street N.W. to construct the new police headquarters.
Councilman Jerry Cox, who serves as the facilities coordinator for the Grady County School System, has been involved in construction not only in the public sector but also in private industry. Cox shared his experience working with Buckley & Associates and noted that an architect would assist the city in designing a building that would fit on the lot and also serve the future needs of the city police department.
Cox said he was not recommending the city engage Buckley & Associates, but he did express his opinion the city should contract with an architect who will be focused on the owner rather than the general contractor.
According to Cox, some general contractors would not bid on the project if Buckley & Associates was the city’s architect because of the firm’s reputation of having the interest of the owner paramount throughout the project until completion.
Councilman Cox also indicated that a multistory facility would be more expensive, but Douglas questioned what additional costs there would be other than an elevator. “That would be determined by the architect,” Cox said.
Cox inquired as to what size the city manager and police chief thought the building needed to be, but no estimation was given. He said if the lot is not big enough for the size building that is needed, then the city would have no choice but to build up. In previous discussions, a facility with approximately 10,000 square feet had been discussed.
Councilman Douglas said that when architects “screw up” it costs the owner, in this case the city, more money. He questioned if a fee structure or cost of service had been discussed, but Addleton indicated it had not.
Douglas also stressed to the police chief his desire that the chief solicit input from the members of his department for the new facility. “The last thing I want to hear at the end of all this is complaints that we didn’t do this or we didn’t do that or we left something out that was needed,” Douglas said.
City officials say the police department is operating in approximately 5,000 square feet of space in the old railroad depot and it has outgrown that facility.
The city manager requested the councilmen take the proposals submitted by the five firms and rank them in one to five order with one being the best choice. Addleton said it was his hope to narrow the field to the top two and then to invite representatives of those finalists to come make a presentation to the council.
City officials are to submit their rankings to Addleton by noon next Monday.
Posted in News