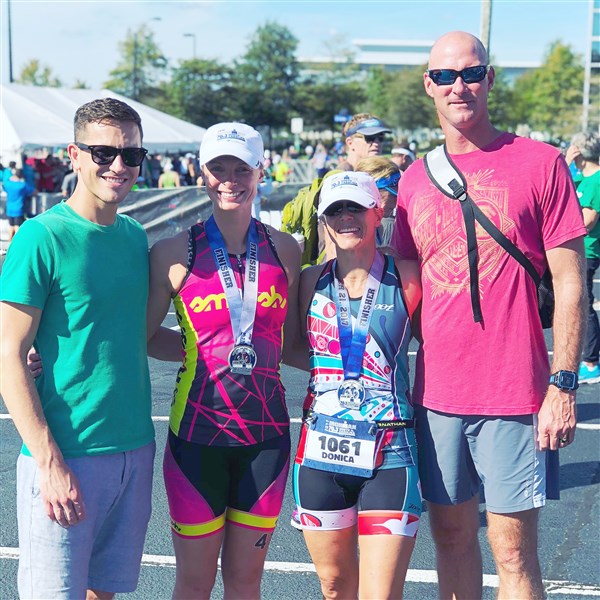 FRIENDS AND THEIR SHERPA, l-r, Nick Noel, Allison Born, Donica Williams and Justin Williams. Born of Tallahassee, and Donica Williams of Cairo competed in the Beach2Battleship half Ironman in Wilmington, N.C. over the weekend. The men helped get their gear where it needed to be.

Staying physically fit is not a problem for Cairo personal trainer Donica Williams. Working out, running and helping others with their own exercise has been a way of life for a long time for the 38-year-old. She has competed in triathlons, marathons, local races. She can run circles around most of us, but don’t ask her to take off her shoes. “I hate going barefoot,” Williams says. That sentiment was reinforced Saturday when Williams competed in her second half Ironman.
“They had asked people to stay away from the swim start area because they were setting up, so I didn’t know,” she says. What she didn’t know is that while waiting for her turn to jump into a salt water channel at Wrightsville Beach, N.C., for the 1.2 mile swim, she’d have to stand in a gravel parking lot.
“I should have kept my flip flops and thrown them away. I didn’t know,” she laments. It would be about four hours later that she would discover what standing in a gravel parking lot can do to tender feet.
Williams was competing in the Beach2Battleship half Ironman Saturday. It took place in Wilmington, N.C., and she had trained for it for months. She wanted to see if she could improve her times from her first half Ironman just six months earlier in Haines City, Fla., the IRONMAN 70.3 Florida.
In a half Ironman, participants swim 1.2 miles, bike 56 miles and run 13.1 miles, an effort that took Williams nearly seven hours to complete in April.
Williams says she got to the Beach2Battleship start area at 5:30 a.m. Saturday, and began her swim at 7:53 a.m. “When I came out of the water, it was about a half mile run from the swim exit to where my bike was. I had hidden my shoes in some bushes (earlier that morning) so I threw those on and headed to my bike,” Williams says. Hiding shoes in bushes for that brief run was not an uncommon practice amongst the competitors, she says. She had even put her bib number on her shoes so no one else grabbed hers by mistake.
After the bike ride, Williams was ready for her best event, running. But it was about three miles into the 13.1 mile stretch that she noticed the pain in her feet. “I had rolled my ankle three weeks ago and had taped my foot. I thought maybe the RockTape was causing the pain,” she recalls. Finally, at mile six, she stopped and took off her shoe and discovered a bad blister on the ball of her left foot. “I knew it was going to be a mental battle to keep moving,” Williams says. “I told myself to just get to the next mile marker and I could regroup. I kept saying that at each mile marker.”
Although each stride was painful, Williams still managed to finish her run in two hours and eight minutes, four minutes faster than her first half Ironman. “I didn’t have a bad run, but it wasn’t the run I wanted to have,” she says.
Not one to succumb to darkness, though, Williams says, “I still had fun! That’s what it’s all about. If it’s not fun, then it’s not worth all the time and effort I put in to do it.”
And, she improved her race time significantly, finishing this event in just six hours, nearly one hour faster than the her time in IRONMAN 70.3 Florida.
At least for this week, Williams is giving her muscles a break, but she plans to continue training and has her sights set on competing in a full Ironman next year.
She says, “I really love it. I’ve always enjoyed doing athletic things. It’s fun. I enjoy the training and I enjoy seeing the training pay off, and I want to show people you can do anything you put your mind to.” And Williams should know. About four years ago she had neck surgery to fuse three ruptured discs and remove a bone spur. She’s also had two hip surgeries. She was not expected to be able to run again. “I don’t let things stop me or discourage me from doing things I want to do,” she says.
Posted in News