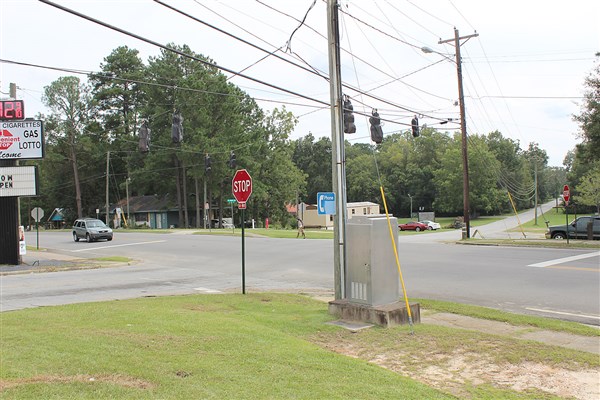 THE INTERSECTION of Fourth Street S.W. and M.L. King Jr. Avenue S.W. has temporarily been made a four-way stop. The traffic signal at the intersection was damaged during a power outage resulting from Hurricane Irma.

City officials report that the traffic signal at the intersection of M.L. King Jr. Avenue S.W. and Fourth Street S.W. will remain out of commission for several more days.
The traffic signal has been out since last week. Last Wednesday, City Manager Chris Addleton notified the mayor and council that it had been determined the signal controller had been damaged during the power outage from Hurricane Irma.
The city has contacted the Georgia Department of Transportation seeking a spare controller. According to Addleton, the DOT will provide a spare to the city as a replacement at no charge, but it will be one to two weeks before it can be installed.
Temporarily, stops signs have been erected and the intersection is being treated as a four-way stop.
“We encourage all motorists to heed the four-way stop and to be patient until the replacement part can be installed and the traffic signal is operating properly,” Addleton said.
Posted in News