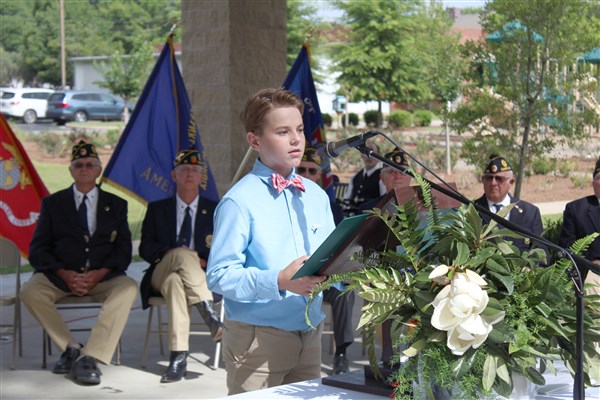 A large crowd gathered Monday morning at Davis Park for the annual Memorial Day observance hosted by the American Legion Jake M. Poller Post No. 122 and Veterans of Foreign Wars Trafford Williams Post No. 8433.
Special recognition was paid to the five Grady countians killed in World War I on this 100th anniversary of the United State’s entry into The Great War.
Washington Middle School rising eighth grader Matthew Oliver “Mo” Wilson was the featured speaker.
“I want Americans to know that there are people fighting for them every single day. There is never a moment where you were or are safe without soldiers. They risk everything they have for you,” Wilson said.
Special tribute will also be paid to Earl H. Opal, who was killed in service to his country in WWI and is the uncle of Mrs. William B. King. Legionnaires highlighted the service of Opal in recognition of William B. King’s extensive research in documenting the military service of Grady countians.
A new monument honoring the sacrifice of all Gold Star mothers has been erected on the Grady County courthouse lawn and was unveiled this week.
Posted in News