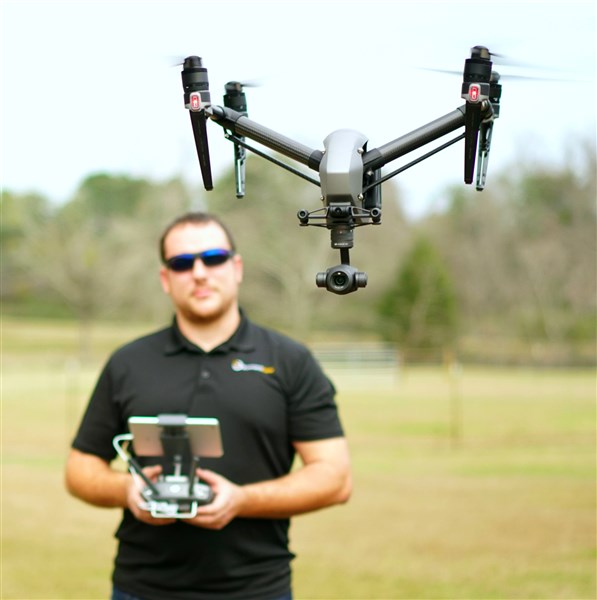 DRONES, such as this one being flown by Ethan Lovett, and their pilots must operate under certain guidelines such as staying away from groups of people. (photo courtesy Summerhill Digital)

A drone flying around West Thomas Stadium during a Cairo High School soccer game forced officials to temporarily stop play last week.
Coach Tom Fallaw, CHS athletic director, soon found the operator of the Unmanned Aircraft System (UAS) on the high school’s baseball field. Fallaw says he informed the man that Georgia High School Association (GHSA) rules prohibit drones, or UAS/UAV, from flying during any “GHSA sanctioned contest,” and the matter was resolved.
The Federal Aviation Administration has strict rules regarding drone flight, including the prohibition of flying one over groups of people, stadiums or sports events.
Although hobbyists are not required to have a license to fly a drone, every drone that weighs more than 0.55 pounds must be registered with the FAA and labeled with the registration number. Anyone operating a drone for commercial use, must pass a test to receive a Remote Pilot Airman Certificate.
Ethan Lovett of Summerhill Digital has such a certificate, and can often be found operating one of the Cairo company’s three drones with attached cameras for clients.
“A lot of the rules that have to do with where and when you can fly UAVs are based off of safety precautions,” Lovett says.
For instance, a drone losing radio signal contact with the operator could simply fall out of the sky. “If it falls out of the sky, it’ll kill you,” says Jeff Lovett, also of Summerhill Digital.
That is why drones are not allowed to fly over any stadium, parade or other gatherings of people. In addition, drones should be operated during daylight hours, below 400 feet, and within sight of the operator and a second person.
“Either the pilot or a spotter has to be physically watching the drone at all times,” says Jeff Lovett.
Drones are not allowed to fly within five miles of an airport without permission, and any drone accident that results in serious injury to any person or greater than $500 in property damage must be reported to the FAA.
Failure to follow FAA regulations could result in a civil penalty of up to $27,500 while criminal penalties can reach $250,000 in fines.
For more information about drone registration email UAShelp@faa.gov or call 877-396-4636 from 10 a.m.-6 p.m., Monday through Friday.
Posted in News