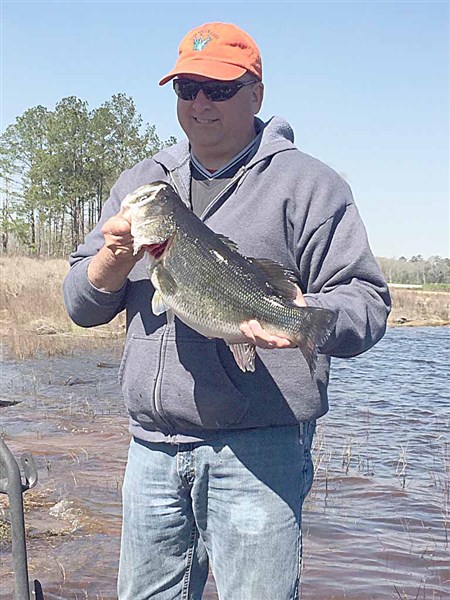 Georgia Department of Natural Resources biologists were here Friday to conduct a fish survey at Tired Creek Lake and determine if any additional stocking is necessary.
According to Grady County Lake Authority Executive Director Mike Binion, the survey lasted approximately 30 minutes. Fish were shocked with an electrical charge that temporarily stunned them. Then they were dipped up, measured and weighed.
Binion says the DNR biologists checked about 20 bass and numerous bream and crappie.
“They said that they didn’t need to do any additional stocking at this time,” Binion said.
John Kilpatrick, one of DNR’s biologists who was involved in the survey last Friday, said that officials found that the bass stocking done in 2015 had been successful.
“This survey tells us fair numbers of bass persisted—their importance is to spawn in the coming weeks to fill the habitat void created with a new lake,” Kilpatrick said.
One of the bass plucked out of the water was a six pound bass, which the DNR official says likely was a fish that was in the creek before the impoundment of the lake began.
He says that most of the 2-year-old fish were in the two pound range.
“To provide future bluegill fishing and have ample forage for the bass, we have raised and stocked about a million fish. State hatcheries literally throughout the state of Georgia have contributed and our leadership in Atlanta recognizes the importance of this lake,” Kilpatrick said. He also noted that state officials are committed to providing the fish that are needed for Tired Creek Lake.
The fish that spawned in 2017 can be expected to reach approximately 10-12 inches by next spring and up to two to three pounds by spring 2019.
Kilpatrick said that bream fishing will be good by the summer of 2018 with many fish reaching more than seven inches.
“We are excited for you guys to have a great fishing opportunity,” Kilpatrick said.
As the lake continues to fill, with full pool being 220.2 feet above sea level, the Grady County Lake Authority is considering recommending the county open the lake to boating when it reaches 218 feet. DNR officials have suggested not opening the lake to public fishing until next spring, but no final recommendation or decision locally has been made on a fishing date.
Posted in News