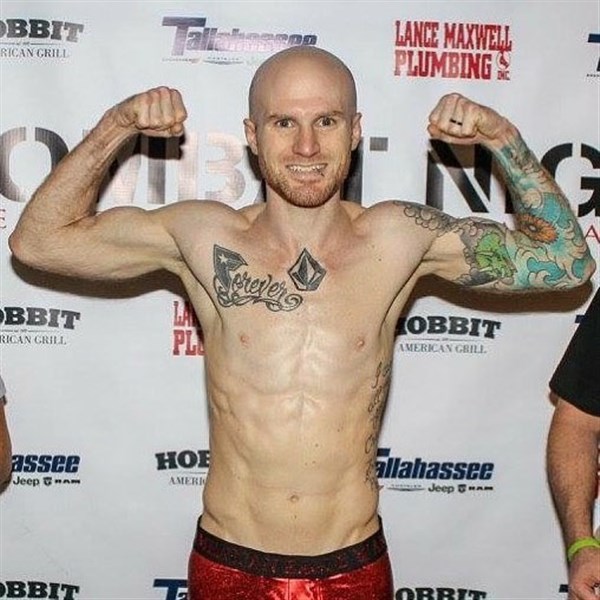 FIGHTING to win, Tate Phillips has a professional record of 2-0.

A Whigham father is channeling his competitive drive into mixed martial arts fighting, and since turning pro last fall he has begun building a winning record.
Tate Phillips, 27, won his second match as a professional fighter less than two weeks ago at Combat Night Pro fight in Tallahassee, on Jan. 21.
“The best feeling in the world is when you get your hand raised up,” Phillips says. The first time a referee raised his hand announcing Phillips as a winner of a professional fight was at an event in Thomasville, Oct. 8, 2016.
Nearly seven years ago is when Phillips started training to compete in mixed martial arts on the amateur level. As an amateur, he built a record of 6-1. His only loss came when he was 4-0.
“I got in the cage, and I guess I was a little cocky. I let my guard down. . .we went all three rounds and the judges decided he did better than I did,” Phillips explains. “Losing doesn’t always mean you lost. You’ve got to figure out your weakness sometime. From that loss, I learned to be a better person and to train harder.”
Mixed martial arts is a full-contact sport. Fights take place inside a cage where participants can use different styles of fighting to defeat their opponents. A win is decided when one knocks out or holds into submission his opponent, or by a judge’s decision.
“It’s a tough and rough sport, and I’ve been lucky enough,” Phillips says.
A desire to win drives Phillips. “I hate losing! I can’t stand losing tic tac toe, video games; I’m super competitive,” he says.
Despite his small stature, Phillips says since he was a young boy he longed to participate in competitive sports, especially football, but it wasn’t to be. “I couldn’t do it, because I was too small; I got smashed,” he recalls. Phillips says in high school, though, he found success in wrestling, a sport he grew to love. Unfortunately, Phillips’ wrestling career was cut short when he dropped out of high school, because he was tired of being picked on for his size.
Phillips eventually earned his GED, but still regretted losing the years he could have had with the wrestling team. When he discovered mixed martial arts, Phillips says he put his all into it, training three years before his first fight in 2012. “I wanted to make sure I could win,” he says.
For years, turning professional was his goal. “I was a small guy, I always wanted to be something big, and I wanted to go pro. Now, my dream is to make $1 million!” he says. “No matter what, when I get older, I want to be able to look back and say, ‘Hey, you tried for your dream.’”
The Tallahassee native lives in Whigham with his wife, Casie, and their two children, Gage and Daisy.
Posted in News