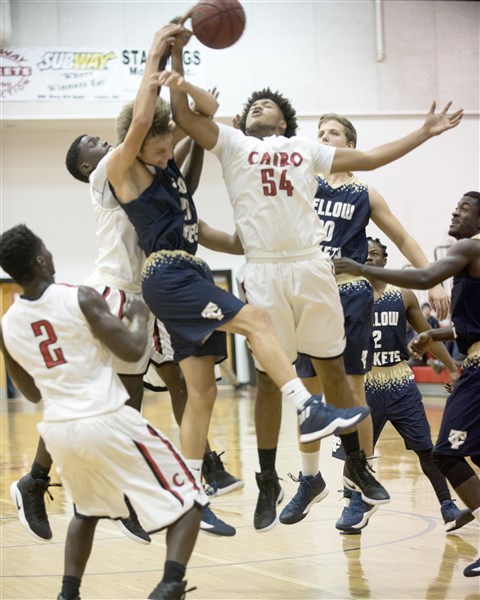 Calvin Issac fights for a rebound.

The Cairo Syrupmaids and Syrupmakers had a busy Christmas break as both teams played in holiday tournaments. The Syrupmaids placed second in the Turner County Classic in Ashburn and the Syrupmakers will compete this week in the Baker County Shootout in Newton. Last Tuesday, the teams hosted TCCHS in a nonregion game at Cairo High School.
The Syrupmakers scored a win over the Yellow Jackets, 51-31. Travis Hunter and PhillieK Byrden each had 11 points and Jahseari Patterson finished with 10. Cairo led 18-14 at the half and pulled away in the second half, outscoring the Jackets 33-14 in the final two quarters.
The Syrupmaids had 16 points from Kevona Jones, 11 from Ny’Jah Greene and 10 from Bernice Sloan, but came up short 59-48 against the Lady Jackets. Turnovers were the difference in the game.
Last Thursday, the Syrupmaids traveled to Ashburn for the Turner County Shootout and placed second with wins over Chattahoochee County and Thomas County Central before losing in the championship game to Fitzgerald on Monday night.
Cairo beat Chattahoochee 62-11. Talandria Johnson with 15 points and Ny’Jah Greene finished with 10 points. On Friday, Cairo avenged two earlier losses to TCCHS, beating the Lady Jackets in a close one, 58-57 in game two of the holiday tourney. De’Mytra Robinson had 18 points to lead the ‘Maids. Ny’Jah Greene finished with 14 and Kevona Jones had 11.
On Monday night, the Syrupmaids played for the tournament championship against unbeaten Fitzgerald. A fast start for the Lady Canes proved to be the difference as Fitzgerald jumped out to a 13-4 lead after one quarter. It was 22-15 at the half and the Syrupmaids found their groove in the second half, pulling ahead  38-34. The fourth quarter was a see-saw match as both teams traded leads for the final 8 minutes. Ny’Jah Greene kept the Syrupmaids in the hunt, making several big free throws down the stretch. However, in the end, a few turnovers for the Syrupmaids proved costly as the Lady Canes took advantage and won the championship by five, 59-54. Kevona Jones led the Syrupmaids with 18 points and Dy’Mytra Robinson finished with 16, including four three pointers.
The Syrupmakers play Wednesday through Friday in the Baker County Shootout in Newton and both teams are back in action after the break as they host Americus-Sumter next Tuesday night. The Syrupmaids tip off at 6 p.m. at the Cairo High School gym.
Posted in Sports