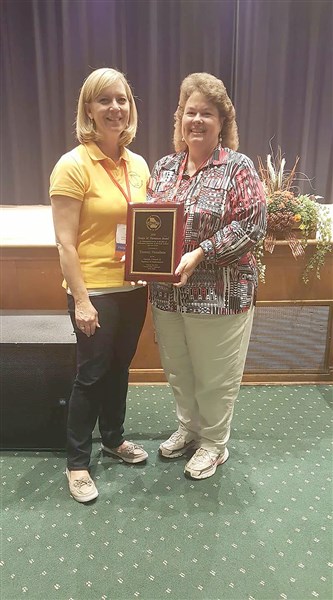 An association for math teachers across Georgia has awarded Cairo High School’s Tammy Donalson with its highest accolade for distinguished service.
The Georgia Council Teachers of Mathematics honored Donalson with the Gladys M. Thomason Award for her service in the field of mathematics education at the local, regional and state levels.
“We are extremely proud of her,” says Chris Lokey, principal of Cairo High School.
Donalson, who is assistant principal of curriculum and instruction at Cairo High, received the award at a state math conference hosted by the math teacher’s council at Rock Eagle, Oct. 19-21.
“What made it as prestigious to me as it was is the people who came before me. Some of them were my professors in college who brought me to Georgia Council Teachers of Mathematics,” says Donalson, “and many of them are people who, when I grow up, I want to be like them, because they were just such huge people in the field of mathematics. It was quite an honor to be on the same list of people (who had received the award).”
A teacher since 1990, Donalson worked two years at Washington Middle School before transferring to CHS. In 2008 she was promoted to instructional coordinator at Cairo High and assistant principal in 2015.
Donalson has been active in Georgia Council Teachers of Mathematics for many years, serving 11 years as conference registrar and finishing the third of four years as chairman of the math conference, which attracts about 2,000 math teachers each year for the professional development courses offered.
She says her experience volunteering with the group has helped her tremendously as a teacher and now administrator. “Some of the best things I have in my tool box I learned from going and hearing from other people,” Donalson says.
Through the council and Georgia Department of Education, Donalson has trained other math teachers around the state for many years. “Anything I can do to highlight Cairo and Cairo High School . . . it’s important to me that we are represented in the state,” Donalson says.
To be considered for the Gladys M. Thomason Award for Distinguished Service, a candidate must be a member of the state and national math councils, and worked beyond the normal job requirements to help improve mathematics instruction.
Posted in News