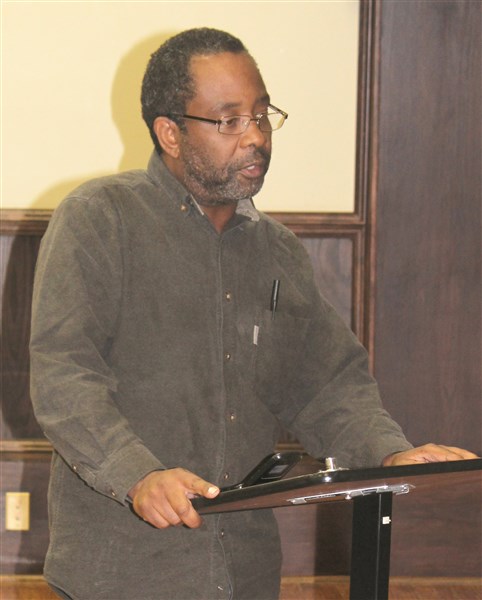 JOHN MONDS challenged the board of education Tuesday night over its recent action to terminate a Cairo High School guidance counselor.

The demeanor of local political activist John Monds at Tuesday night’s meeting of the Grady County Board of Education was in sharp contrast to how Monds reacted following the board’s unanimous vote on Oct. 25 to accept School Superintendent Dr. Kermit’s Gilliard’s recommendation to dismiss Cairo High School guidance counselor Cindy Williams.
Following the hearing conducted by the board on Williams’ dismissal, Monds shouted his opposition at the top of his lungs.
On Tuesday night, Monds continued to voice opposition to the board’s action, but did so in a civil, measured tone.
Monds questioned why the board voted to approve the superintendent’s recommendation on “trust” rather than based on the evidence presented during the hearing.
He also questioned why the board has not taken action against other school system employees based on testimony presented during the hearing including testimony from an employee who admitted assigning a grade for a course that had not been completed.
Monds also alleged that testimony was presented that indicated Superintendent Gilliard “tried to block evidence” from being presented from PowerSchool and Odyssey that could have been used by Mrs. Williams to defend herself.
“The local press cannot cover for you forever,” Monds said. He said that he hoped a video of the hearing would be made public.
During his three minutes allotted time to speak, Monds also questioned why contact information including contact phone numbers for board members was not available to the public. Monds also voiced opposition to the board’s policy governing public participation in school board meetings.
He claims that the existing policy is used to control public content and public participation in school board meetings.
Williams was terminated for removing a course and altering the transcript of a Cairo High School student, who happened to be her daughter.
Mrs. Williams began work at CHS on July 18 after having been employed by the Dougherty County School System from July 2004 until June 2016.
The school board met briefly Tuesday night behind closed doors with board attorney Thomas L. Lehman to discuss a personnel issue. No action was taken as a result of the closed session.
In other business this week, the school board:
Approved the hiring of the following personnel: Terrance Gordon – grounds service tech; Keith Watson – maintenance service tech; Brenda Gordon – food service assistant at Southside Elementary School; Yolanda Cornell – food service assistant at Washington Middle School; Rebecca Palmer – special ed parapro at Southside; Jane M. Walden – central office purchasing specialist; and Elizabeth Rykard – parapro at Eastside Elementary School.
Accepted the resignation of Anja Johnson – food service assistant at Washington; Jessica Sullivan – special ed parapro at Eastside; and Tommy Connell – school bus driver.
Approved the retirement of Charles Jones – grounds supervisor. Grady County School Superintendent Dr. Kermit Gilliard told board members that Jones had served the school system faithfully for 38 years. “We appreciate the good work he has done for the system over the years,” Dr. Gilliard said.
Approved two change orders on the College and Career Academy construction project. Change order #5 for $1,091.62 was for changes to an interior wall to eliminate windows in a wall separating two classrooms. Change order #6 for $3,002.52 was the result of increasing the size of the air conditioning system for the new facility.
Unanimously adopted new policies regarding weapons, code of ethics and advertising/solicitation/campaigning on school grounds.
Declared surplus the former technology building on the campus of Cairo High School that most recently was used as a field house for baseball/softball.
Posted in News