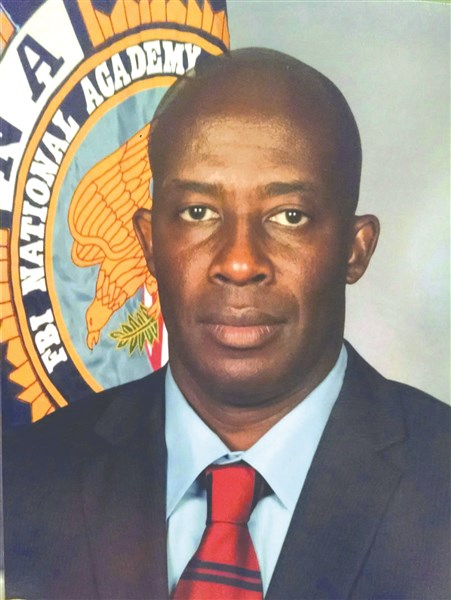 He has walked where they walk, he has run where they run, he has won and lost many of the same battles they have fought, William “Peedie” Evers, a 1986 Cairo High School graduate, came home last Wednesday and brought his message to the Syrupmaker football team.
Evers, who played college football at FAMU, played in the NFL for the Atlanta Falcons and crossed the border to play Canadian Football, came back to his hometown to share his life’s journey.
Two weeks ago, Evers was one of 236 Law Enforcement officers to graduate from the FBI National Academy Program at Quantico, Va.
“I came from these streets, I grew up right here in Cairo, Ga., right down the road in those projects. I know what it means to do without, I know what it means to work hard, I’m a Syrupmaker, just like you, I bleed red and black,” he told members of the Syrupmaker football team last week. “Men, I know what it’s like to want something better. I came from a home with a single mother, I walked to practice, I walked home late at night after games, I didn’t have a car, all I had was football,” Evers told them.  “I can still remember that band playing out there on the field, I remember wanting to hit somebody so bad we would be crying just to get the chance.”
Evers shared his life’s journey, from growing up the hard way in Cairo, to promising his mother a better life, a home out of the projects. “I made those promises to her and men, I’m telling you, I almost messed it all up because I didn’t get myself right in those classrooms, I didn’t take the ACT and SAT tests seriously, I had offers to play college ball and couldn’t accept them because I couldn’t make the grade. On my final try, the summer I graduated, I made the score, but the colleges I wanted to go said it was too late. I was disappointed in myself, I felt I had let my mother down, but the coaches at FAMU, where I took that last test, wanted to take a chance on me so I decided to go down to Tallahassee and give it a try. I was 13th on the depth chart at cornerback, I was at the bottom of list but, men, I knew what my coaches here at Cairo had taught me, coach Tim Helms, those other coaches, they taught me that Syrupmakers work harder, hit harder and play harder, and soon I was starting at FAMU and never lost my spot,” Evers said.
Evers graduated from Florida A & M University in 1996 and now works for FAMU’s police department where he is a lieutenant on the force. Evers said the FBI National Academy program was one of the best things he has ever done. The program, which promotes improvement of the mind, body and soul is a rigorous 12-week course in which students complete course work to earn a master’s degree, physical challenges and courses to improve the “entire” person. Evers and his classmates graduated on Sept. 17 and he has returned to his position at FAMU.
“I want to come back and be more involved in our community. Our young people need to see that people can come from where many of them are and get out and be successful. For me, it was football, but it also took being successful in the classroom. I want them to understand it all starts with those teachers in those classrooms. I want them to know if they need help in reading, or math or any subject, that teachers are there to help and they shouldn’t be afraid to ask. I got help when I needed it. It’s nothing to be ashamed of, and our young people need to have a place they can find that help and it is there. They just have to want it,” Evers said.
As Evers finished his talk with the team he encouraged them to have respect for others, and it starts with respect for yourself. “You can’t expect others to respect you, if you don’t respect yourself, you cant’ respect others if you don’t respect yourself. Be mindful of what you present to others, take care of yourself, it starts with your personal appearance, and what you think of yourself. You don’t have to have a lot money to dress nice and act right. Don’t put things in your body that will do nothing but harm you,” Evers told the players.
The former Syrupmaker promised he would be back, and he expected to see them become the very best they could be on the field, in the classroom, and at home. “I’ll be around men, I’ll be here. You’ve got good coaches, my coaches provided me great leadership, like a father to me. You have teachers that care about you, you have family that cares. Make something happen in your life, it’s up to you,” Evers concluded.
Posted in News