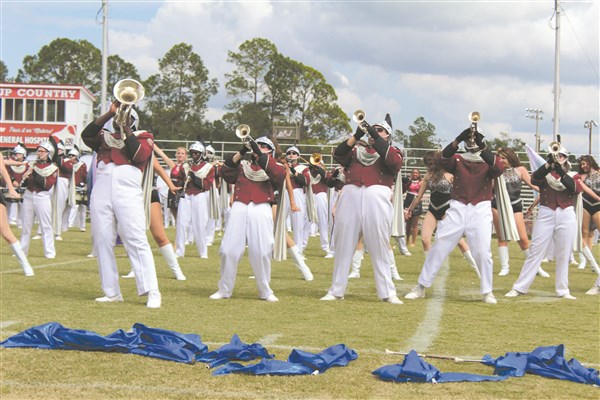 The Grady County School System, Cairo High School, the Syrupmaker Band and the CHS Band Boosters earned high marks from participants in Saturday’s Georgia Music Educators Association District 2 Marching Band Jamboree.
After dire weather predictions earlier in the week, Saturday turned out to be rain-free, but quite hot and humid.
“The Jamboree was incredible. A huge thank you to (Band Boosters President) Jeffrey Cape and the Band Boosters for their hard work before, during and after the event. Their planning and efforts maximized this fundraising opportunity for the Syrupmaker Band,” CHS Band Director John Scanling said Monday.
“Several of the band directors commented this was the most organized jamboree the district has held in the 10-year history of the event. It would not have been possible without the support of the Band Boosters and Sherry Smith and her concession stand crew,” Scanling added.
Band Booster President Jeffrey Cape said he also was pleased with the event. The only downside to the day, according to Cape, was the extremely high humidity. “It was pretty overcast, but it was hot and it was so humid. I was so glad our kids did a good job of staying hydrated prior to and during the day,” Cape said.
Band officials say approximately 20 people suffered heat related illnesses during the day-long event, most requiring only minimal first aid, but some were more serious
“I am certainly glad we had the Grady Emergency Medical Service there, because we certainly needed them. Our EMTs did a fantastic job of taking care of the folks who got overheated and dehydrated,” Cape said.
Over 3,000 people attended the jamboree held at West Thomas Stadium Saturday. According to Scanling, over 3,000 meals were served by Sherry Smith and her concession stand crew and CHS Band Boosters. “Everyone I’ve talked with was so impressed with the quality of the food and how quickly it was served,” Scanling said.
The CHS band director also thanked Michael Best, voice of the Syrupmaker Band, for serving as emcee for the event. “He played a big part in everyone’s positive impression of the event,” Scanling said and Cape thanked Best for keeping the participating bands on schedule.
In addition to the Syrupmaker Band, other participating bands in Saturday’s event were from Turner County High School, Dougherty County High School, Monroe High School, Brooks County High School, Worth County High School, Albany High School, Pelham High School, Lee County High School, Thomasville High School, Tift County High School, Thomas County Central High School, Colquitt County High School and Crisp County High School.
The climax of the event was a performance of the Troy University “Sound of the South” Marching Band.
“Having Troy end the day was an incredible experience. Cairo folks were thrilled to see Katie Rathel and Josh Ward perform as members of The Sound of the South,” Scanling said.
“The Troy Band’s performance was like icing on the cake. From the very first note they played, I had chill bumps up and down my arms,” Cape said. He also noted that the band students from Cairo and the other high school band programs from across southwest Georgia were all thrilled by the Troy band.
Former Syrupmaker band members Katie Rathel and Josh Ward were spotlighted during Troy’s performance. Also recognized were 18 other Sound of the South members who are graduates of District 2 high schools.
Director Scanling lobbied his fellow District 2 band directors earlier this year to bring the jamboree to Cairo for two years, but the CHS band director shies away from taking credit for the successful event.
“There are a lot of people around me that make me look good,” Scanling said.
The Syrupmaker band’s performance at the jamboree was also well received and Scanling complimented his band for their hard work and preparation.
Both Scanling and Cape also expressed appreciation for the support of the Grady County Board of Education and, in particular, School Superintendent Kermit Gilliard and CHS Principal Chris Lokey.
“Dr. Gilliard and Mr. Lokey made sure the stadium and the bathroom facilities were cleaned following Friday night’s football game, and they helped us to see that the facilities were cleaned and trash disposed of following the jamboree. We couldn’t have done it without their help,” Cape said.
Director Scanling said plans are already being made for the jamboree to be held here on Saturday, Sept. 16, 2017.
“It was a great day and we are looking forward to hosting it again next year,” Scanling said.
Posted in News