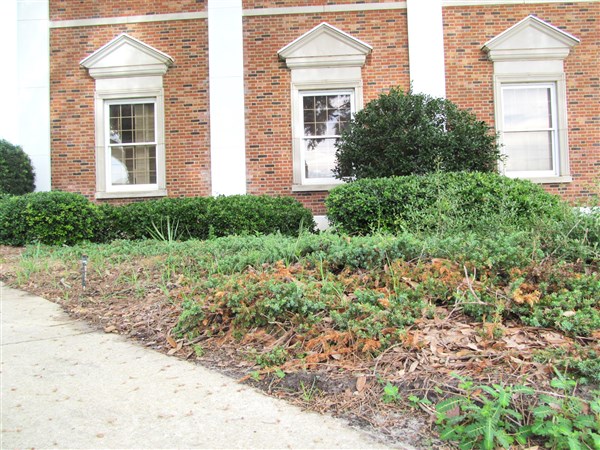 THE UNKEPT look of beds on the front lawn of the Grady County Courthouse.

Years of neglect have taken a toll on the landscaping at the Grady County Courthouse and surrounding square, but some improvements to the grounds will soon take place.
As part of his Eagle Scout service project, Boy Scout Isaac Bivins of Whigham Boy Scout Troop 383 will lead a team of scouts and other volunteers in planting new plants to replace diseased shrubs and add color to the landscape of the courthouse and the new Board of Registrars office in the former Wind duplex.
A group of approximately 15, headed up by Bivins, will tackle the landscaping project on Saturday, Aug. 13.
Grady County administrator Carlos Tobar has signed off on a budget of $1,291.98 for five hydrangeas, 20 Encore azaleas, 14 Carissa holly and 14 dwarf Yaupon, plus top soil, garden soil, fertilizer, and landscape fabric.
According to Tobar, the county’s building and grounds department recently removed diseased shrubs or dead plants around the courthouse. He noted that other plants and shrubs need to be cut back, but that would have to be done at the opportune time.
Grady County clerk Carrie Kines Croy has been pushing for changes to the courthouse landscape for many years and she and Tobar said this would hopefully be just the first phase of a major rehabilitation of the landscaping of the courthouse and courthouse square.
“This will make the courthouse grounds look a hundred times better and add some color to the courthouse,” Mrs. Kines-Croy said.
She also thanked Derrick Major, a local landscaper, for his assistance in selecting plants and allowing the county to purchase the plants at wholesale prices.
“We thank Isaac Bivins for volunteering his services for this project,” Tobar said.
Bivins is the son of Dr. and Mrs. Jeff Bivins of Cairo.
Posted in News