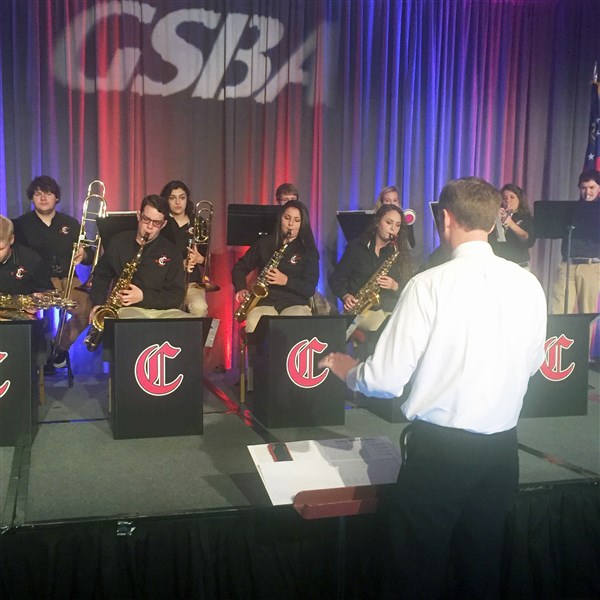 From all reports, the Cairo High School Jazz Band presented an impressive performance at the opening session of the Georgia School Boards Association summer conference in Savannah Friday morning.
The band was invited to perform by GSBA officials after coaxing from veteran Grady County Board of Education member Teresa Gee Harris.
“Getting a group together during the summer break to be properly prepared for a performance is challenging. The students committed to our practice schedule and it paid off,” CHS Syrupmaker Band Director John Scanling said Monday.
He added, “The kids had a great performance. They should be very proud of themselves. We should all be proud of the way they represented Grady County Schools.”
Grady County School Superintendent Dr. Kermit Gilliard was equally appreciative of the band members’ dedication and hard work.
“It was an honor to have our students represent Grady County and Cairo High School at a statewide meeting of 625 school board members and superintendents. During the break, colleagues, board members, and even people I did not know would stop me and tell me how much they enjoyed the band. One gentleman stated he wished they had been able to play longer,” Dr. Gilliard said.
He said that he also received positive comments on Facebook from friends who are superintendents who were in attendance and wished to congratulate the band on its performance.
“The Cairo High School band program has a long history of excellence, and under Mr. Scanling’s direction they continue that tradition. I’m extremely proud of them all,” Dr. Gilliard said.
Board member Harris also said she was impressed by the band.
“They were all that I expected and more. The GSBA attendees were very impressed and the president of GSBA said he would put our jazz band up against anyone. It was a proud moment for all Grady County board members present,” Ms. Harris said.
The veteran Grady County school board member also noted, “It was my dream come true. I have sat and listened to school groups perform for 16 years and it was great listening to an outstanding group from Grady County for once.”
The Jazz Band performed for approximately 20 minutes at the beginning of the session and once the meeting was called to order the band played the national anthem before concluding its program with two additional numbers.
“I am personally thankful for Danny and Heather Hendrix and Robert and Rhiannon Patrizi, band parents who are willing to travel with our students so that they can have these experiences. It takes many volunteers to assist Mr. Scanling with the band program. We are fortunate to have great parental support for our band program,” Dr. Gilliard said.
CHS Jazz Band members who made the trip to Savannah last week include: Katie Dorris, Christani Nowell, Ronald Carter, Hyatt Hendrix, Trey Bentley, Clay Brown, Akaylie Finberg, Jeremy Thomas, Jacob Adams, Erin Connell, Camryn Patrizi, Quincy Ball, Brendan Forest, Destiny Lurry, Rebecca Roberts, Josh Ward and Jarred Stinnett.
The group included recent graduates and rising seniors and juniors.
Posted in News