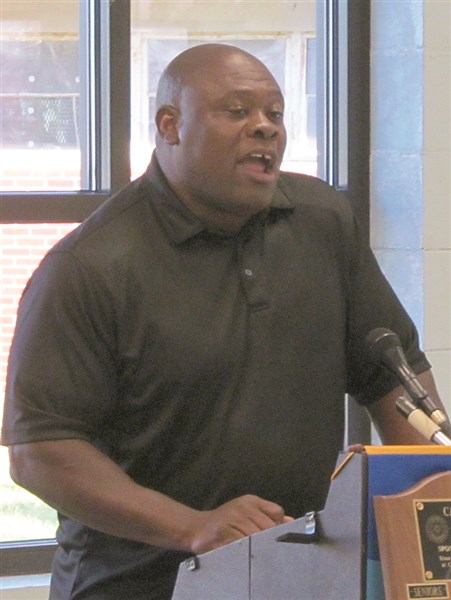 The Top Ten students in each class at Cairo High School were feted Tuesday night by the Cairo Rotary Club.
It was the 29th time the local civic club has recognized the high school’s top scholastic achievers.
“The higher you go the thinner the air. Where you exist academically, the air is thin and that is a tribute to you. Not all of us get there,” Derrick Moore, chaplain for the Georgia Tech Yellow Jackets and the banquet’s guest speaker, said Tuesday night.
Describing the 40 students as “some of the brightest students in this world,” Moore warned the Top Ten students that the higher they go in their pursuits, the tougher the competition will become.
Moore said it was critical for more students to embrace the technology that affects their lives everyday and he encouraged them to pursue careers in math, science, technology and engineering.
Building on the acronym STEM, Moore said the “s” stood for serious.
He told the audience the Top Ten students did not achieve such high honors without being serious about their academics. “It takes serious students to compete,” he said.
Moore said “t” stands for testing. “You’ve been tested a good deal already, but in the future you will be tested even further,” he said.
“E” he said was for educated and the Yellow Jacket chaplain said the group of 40 CHS students were highly educated.
Moore said “m” stands for moving. “You’re always moving. Never static, you’re dynamic,” he said.
The former NFL running back and college All-American also paid tribute to the parents of the students as well as local educators.
“Behind every dynamic student is a dynamic, great parent. The greatest cheerleaders in the world are at your house—your parents,” he said. And added, “without outstanding teachers and educators pushing you to achieve greatness none of this would be possible.”
In closing, Moore told the high school scholars that they were not going after their future, but said “you already possess it. It’s in your hands to manipulate how you want it to go.”
“Wake up every morning believing you can do it, no matter what task it might be,” Moore said.
The Rotary Club’s guest speaker played for the Atlanta Falcons, Detroit Lions, Carolina Panthers and Arizona Cardinals. He was an All-American running back for Northeastern State University. Moore is an acclaimed motivational and inspirational speaker and author of three books.
Having grown up in Albany and attended Monroe High School, Moore is no stranger to southwest Georgia. He told the audience that during his high school football career he had traveled to Cairo to play the Syrupmakers. “I laughed all the way down here that first time about playing the Syrupmakers, but I must tell you that I cried all the way home,” Moore said after Cairo put a whipping on the Monroe squad.
The Top Ten for each class during the 2015-2016 school term were:
Ninth grade: Destiny Anderson, Cambrea Augusta, Ian Batey, Sydney Catrett, Brianna Harrell, Thomas Jones, Meredith Renaud, Jalyn Ross, Mauren Sallee and Kelsey Taylor.
Tenth grade: Nestle Butler, Bryson Cape, Lauryn Cathey, Anna Gilliard, Hyatt Hendrix, Anna Hester, Luke Lauder, Taylor Lee, Kaylee Nelson and Chason Rabitaille.
Eleventh grade: Issac Bivins, Ayzia Bogan, Madison Catrett, Hannah Dentz, Katherine Dorris, Emerson Hancock, Shelbie Jordan, MacKenzie Puckett, Madison Pyles and John Wind.
Twelfth grade: Julia Bass, Katelynn Bryan, Lauren Cassels, Drew Collins, Ted Hendrixson, Harley Ponder, Adrian Sadler, Kellyn Taylor, Rebecca Toole and Hilda Trejo.
Special recognition was paid to the graduating seniors who had achieved Top Ten status all four years of their high School career. Those students were: Drew Collins, Ted Hendrixson, Harley Ponder, Adrian Sadler and Kellyn Taylor.
Rotarians also made it possible for other Cairo High School students to benefit from hearing Moore’s remarks and all other students were invited to hear him prior to the Top Ten banquet at the CHS auditorium. Approximately 50 students took advantage of the opportunity and came to hear the Georgia Tech official speak.
Cairo Rotary Club President Sanjay Patel served as the master of ceremonies and gave the audience, which packed the CHS cafeteria, a brief history of Rotary.
President Patel also recognized the Cairo Rotary Club members present Tuesday night as well as the following businesses and individuals who sponsored the 29th annual Top Ten banquet: Blough Tech Inc., Cairo Eye Care, Cairo Chiropractic, The Cairo Messenger, Capital City Bank, Citizens Bank, Grady EMC, Grady Finance Co., Grady General Hospital, Hobson Chevrolet, Pollock Insurance, Quick Buys, Rose City Outdoor, Sheriff Harry Young, South Georgia Tractor Inc., Southern Insurance, Stallings Motors, Dr. Ron Spooner, Thomas L. Lehman, and United National Bank.
Posted in News