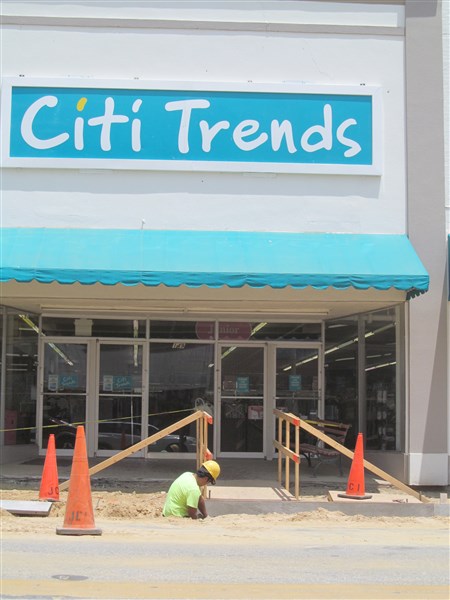 WORK IS UNDERWAY to begin installing new curb and gutter on the east side of South Broad Street.

South Broad Street was reopened to thru traffic in the central business district Friday and Cairo City Manager Chris Addleton says that should be the last extended closure until near the end of the streetscape project.
“We appreciate everyone’s patience and cooperation. It has been inconvenient, but we believe the result will be worthwhile,” the city manager said.
The street had been closed for the better part of two weeks as work installing new storm drains underneath the street took place. Prior to that, traffic had been hampered by work to bore and install a new water line underneath the CSX Railroad.
As part of the project, the city is planning to mill off 1.5-inches of built-up asphalt and replace it with 1.5-inches of new pavement at the conclusion of phase one of the streetscape project.
“When the mill work begins, we will have to close the street for an extended time, but hopefully there will not be the need to close it for an extended period between now and then. Certainly, there may be temporary closures along the way like we had Tuesday, but nothing for long periods,” Addleton said.
Joe Schroeder, the job superintendent for JCI General Contractors, Inc., of Moultrie, reported this week that work is underway on installing the curb and gutter on the east side of South Broad Street. The project superintendent estimates work on the new curb and gutter will be completed by the end of this week. Then work will begin on installing the new sidewalks.
According to Schroeder, once all work is completed on the east side, his crews will then move to the west side to begin demolition of the sidewalk on that side of the street.
Ramps with side rails have been constructed and are in place to provide access to the impacted downtown businesses.
Businesses with rear entrances are encouraging customers to utilize them and avoid the front doors.
Schroeder and JCI have done similar projects in Thomasville, Bainbridge, Donalsonville and Richland.
This first phase of the streetscape project will encompass from South Broad Street at the railroad south to the intersection of Second Avenue S.E. and M.L. King Jr. Avenue S.W. and is costing $1,137,087.
The project includes a reduction in lanes on South Broad Street to two plus a turning lane, landscaping, benches and new lighting and traffic signals.
City officials had said previously that it will take four to six months to complete phase one.
Phase two, which has already been designed, as has phase three, would run from the railroad tracks to Roddenbery Memorial Library. The phase three of the streetscape would connect Broad Street to Davis Park on the east and to the Grady Cultural Center on the west.
Phase One is being paid for with proceeds of a $700,000 Federal Transportation Enhancement grant awarded to the city five years ago plus Special Purpose Local Option Sales Tax proceeds and earnings from the city’s Municipal Competitive Trust account.
Posted in News