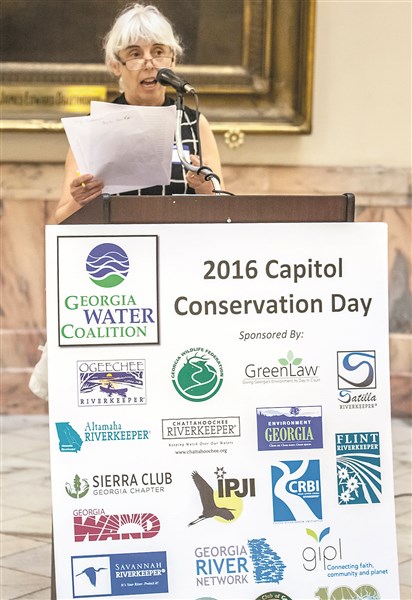 ALINE RUNDLE of Cairo spoke at a Clean Water Day of Action at the state’s capitol. (Photo Credit: Erik Voss)

Aline Rundle’s keen interest in making sure Cairo citizens get clean water to drink has propelled her onto a statewide stage as a spokesperson for the city’s ongoing plans to treat the municipal supply for naturally occurring arsenic, which has recently tested above acceptable levels.
Rundle participated in a telephone press conference on water issues with media from around Georgia two weeks ago, spoke at the state capitol during the Georgia Water Coalition’s Clean Water Day of Action last week, and was interviewed by Atlanta National Public Radio station, WABE-90.1-FM, on the program ”Closer Look with Rose Scott and Jim Burress” this week.
During her talks, Rundle has been complimentary of Cairo city leaders for building a new water treatment plant and ground water storage tank facility capable of treating for arsenic, the first such system in Georgia.
At the capitol on Monday, March 15, Rundle said, “After testing our water and learning about the high arsenic levels, my neighbors and I met with the City. The City responded quickly to our concerns, and is now investing in technology and applying for funding to treat and remove arsenic from its wells.”
Also at the event, residents from Shell Bluff and Waycross spoke about water concerns in their communities and their fears that unclean water supplies have lead to increased rates of cancer and other illnesses in their communities.
Dr. Yolanda Whyte, a pediatrician in Atlanta, said at the event, “Due to the risks of documented, contaminated drinking water here in Georgia, I advise my patients to only drink purified water. It’s a shame because access to clean water isn’t a privilege. It’s a basic human right.”
For the many pristine underground water supplies in Georgia, other speakers asked legislators to make sure they stay clean. They urged the passage of Senate Bill 36, which would affirm the public nature of aquifer resources, confirm the private property right to undiminished natural water quality, and requires the Department of Natural Resources to promote rules to protect private property and groundwater resources.
The public event, held in the capitol’s rotunda, was organized by the Georgia Water Coalition, which is a consortium of 233 conservation and environmental organizations, hunting and fishing groups, businesses, and faith-?based organizations that work to protect Georgia’s water.
Since realizing the arsenic level was rising in its water supplies, City of Cairo leaders planned the construction of a new treatment facility that is expected to clean arsenic from the supply. The plant is under construction now at Cairo Municipal Airport, and is expected to be finished this fall.
There are approximately 4,500 customers that get drinking water from the City of Cairo municipal supply. All public water supplies in Georgia are tested regularly, but Cairo has recently undergone more frequent testing after its arsenic contamination level tested higher than the maximum of 10 parts per billion. During the second through the fourth quarters of 2015, the water showed 11, 10.65 and 11 parts per billion respectively. Although higher than the acceptable level, the water is still safe to drink for everyone but possibly the oldest and youngest consumers and those with compromised immune systems, according to Georgia Department of Natural Resources information. The state penalized the city for the violations, which should stop after its new water treatment plant goes on line later this year.
Posted in News