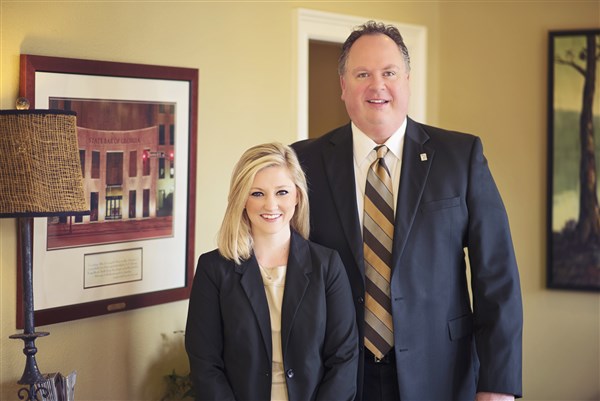 TABITHA PAYNE, 26, has joined the The Law Office of Joshua C. Bell as an associate. She is shown here with Attorney Josh Bell.

A newly sworn-in attorney has joined the Whigham law practice of Joshua C. Bell.
Tabitha Payne was sworn in as a member of the Georgia Bar by the Honorable Chief Judge of Superior Court A. Wallace Cato in a ceremony on Oct. 29, 2015 following her passing the bar exam.
Ms. Payne is not new to Bell’s practice. She has worked with the firm since she enrolled in the Florida Coastal School of Law in Jacksonville in 2012 and has even worked as a babysitter for Bell’s two children for several years.
Payne graduated from Florida Coastal in May 2015 and took the bar exam in July 2015. After taking the bar, she returned to Bainbridge and resumed her work with Bell’s firm.
In addition to her law degree, Payne earned a Bachelor of Science degree in Early Childhood Education from Albany State University in 2012. She is a 2007 graduate of Bainbridge High School.
Born in Valdosta, Payne was a child in a military family that moved several times. The majority of her rearing, though, took place in Bainbridge.
“What impresses me the most about Tabitha is her work ethic. This became more evident in law school. As it got tougher she got stronger and was in the top in her class in four out of five subjects her final semester. She’s very smart and energetic. She will be an asset to both this firm and our community,” Bell said.
“I have had the pleasure of working with Josh for many years now. I started babysitting his children when his oldest, who is now 9, was 15 months old. At this point I consider Josh, Deana, Finn and McCartney to be family which makes this opportunity to join his practice that much more exciting. Not many people can say they are beginning an exciting new career and keeping the comfort of knowing exactly who they are working with. I am so ecstatic to begin my legal career at The Law Office of Joshua C. Bell. Even more than that though, I am beyond grateful that Josh saw something in me that he felt would contribute to his practice. I look forward to serving this community,” Payne, 26, said.
Bell and his new associate can be reached by calling 229-762-4000. The Law Office of Joshua C. Bell is located on Broad Avenue in Whigham.
Posted in News