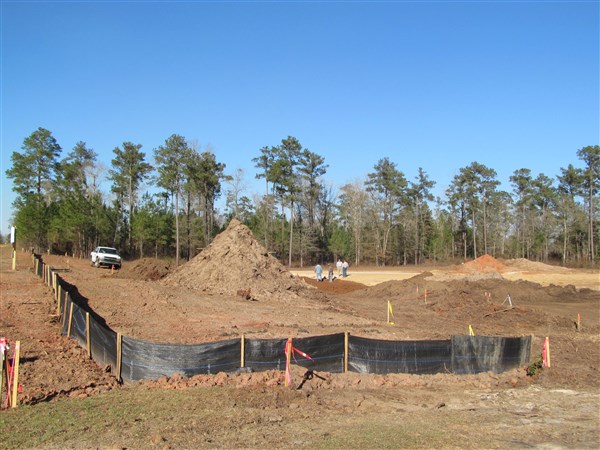 CONSTRUCTION CREWS are busy on Gray Road where a new Dollar General store is being constructed.

A new Dollar General store, valued at $500,000, is currently under construction north of Cairo, according to Grady County Joint Development Authority Executive Director Chadd Mathis.
Mathis has been working with the developers on the project, code named “Project Gold.” On Tuesday, he updated authority members on the project and shared a photo of the construction crews at work on the site at 109 Gray Road  off Ga. Hwy 93/111 North.
“They (the developers) have been very complimentary of how easily the permitting process was here and how well everyone has been to work with,” Mathis said.
This will be the chain’s fourth location in Grady County with two other stores in Cairo and one in Whigham.
Mathis also reported this week that during discussions last month between authority representatives and chamber of commerce representatives, the $2,322 for custom blinds purchased from The Decorating Corner of Cairo would be paid for with chamber funds and not with money from the JDA. Mathis had requested last month that the JDA pay for the blinds after they had already been ordered and installed.
Posted in News