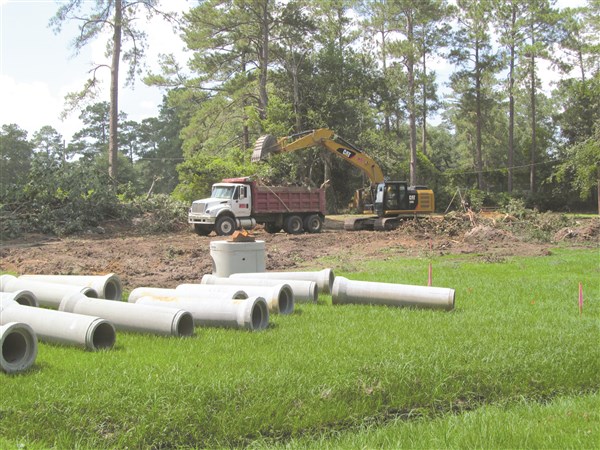 Work is underway at Cairo’s Azalea Park in the northwest section.
Crews from Cal-Mart, Inc. began work late last week and the work is continuing this week as part of an initial phase of improvements to the city park.
Cal-Mart was the low bidder with a bid of $119,655.25.
The park work includes clearing, grubbing, grading, installing an 18-inch curb and gutter, putting in storm drain piping and paving an asphalt roadway.
The road work includes construction of a thru street between Seventh Avenue N.W. and Eighth Avenue N.W. It also includes a new parking area with 27 parking spots.
According to Cairo City Manager Chris Addleton, the long-range plan is to build a covered pavilion similar to the one the city constructed at Davis Park.
The city will replace the swings and slide as well as the picnic tables at Azalea Park in the coming months.
According to Addleton, the contract with Cal-Mart calls for construction to be completed within 90 consecutive days.
The work is funded partially with Local Maintenance Improvement Grant money from the state and the city’s cemetery and park’s budget.
Posted in News