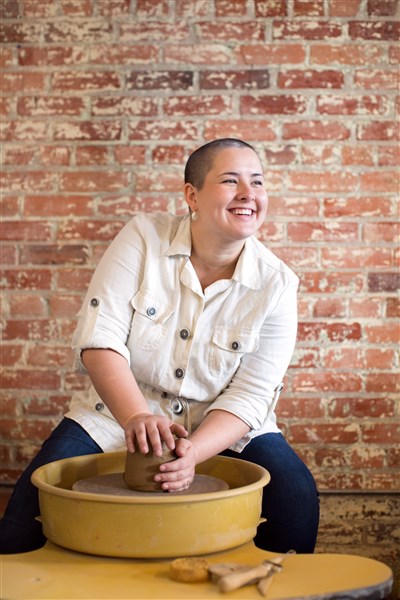 CAPRICE KELLY is a 2008 graduate of Cairo High School and new artist-in-residence for Thomasville Center for the Arts. Her works will be on display during an open house at Saturday’s Due South event.

An event celebrating the South and the talented people who populate the area, from chefs and musicians to artists and writers, takes place this weekend in Thomasville. Due South takes place Saturday with live music, food trucks, art and more scheduled to delight patrons in attendance.
One of the featured artists will be Cairo native Caprice Kelly, a ceramicist and photographer. Kelly is one of six new artists-in-residence at Thomasville Center for the Arts’ Studio 209.
Kelly, 25, says it was the Kiwanis Art competition that first piqued her interest in art when she was a student at Southside Elementary School. After graduating from Cairo High School in 2008, she studied at Bainbridge College and earned an associate’s degree in business. The summer of 2010 she traveled to London where she participated in a Study Abroad program focused on history. When she returned to the States, Kelly went to Valdosta State University and in December 2014 she graduated with a bachelor’s degree in art.
For the last few months as an artist-in-residence, Kelly has made pottery and worked on her photography, and she will have some of her creations for sale during Due South.
She says she is grateful for the residency program through Thomasville Center for the Arts, “The TCA residency is giving artists like me hope that the arts are not dying out. They support and nurture our need/want as artists to create and that’s all I could ever ask from them.”
During Saturday’s event Kelly says she will not only sell but also make pottery, possibly even her favorite pieces. “I enjoy making functional pottery, because the more a piece gets used the more memorable it becomes. I find that people can become sentimentally attached to their favorite cup or bowl, which makes me very happy,” she says.
Her photographs are captured using either digital or film formats, with only natural light and very little editing. “I want them to be moments captured, not moments distorted,” Kelly says.
The daughter of Joe Kelly and Carole Kelly and stepmother Brenda Kelly says she also enjoys kayaking and spending time with her fiancé, Leland Bowman, and her dog, Buzz Lightyear.
Due South will take place at TCA Studio 209, located at 209 West Remington Avenue.
The event is rain or shine and gates open Saturday at 11:30 a.m. General admission tickets are $10. A Due South VIP party will start that night at 6:30 p.m., and tickets start at $150. Due South is sponsored by Thomasville National Bank in concert with Thomasville Center for the Arts and Thomasville Entertainment Foundation; it benefits Thomasville Center for the Arts programming and experiences. For tickets and more information, visit thomasvillearts.org or call 229.226.0588.
Bands scheduled to perform include Band of Heathens of Austin, Texas as headliners with Grassland String Band of Athens as their opening act. Evan Barber and the Dead Gamblers, The Gatorbone Band, Grant Peeples and the Peeples Republik, The Fried Turkeys, and an acoustic set by Royce Lovett will take the event from day to night.
Posted in News